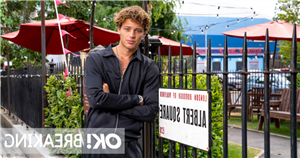 EastEnders has announced that Bobby Brazier is making his acting debut in the hit BBC One soap.

The 19-year-old, who is the son of the late Jade Goody, will be making his arrival in autumn as the "chaotic" Freddie Slater.

Bobby, who is currently filming scenes, said he is "very grateful" for the opportunity and that he's "loving every minute" so far.

The model, whose father is Jeff Brazier, said: "I’m really excited to be joining the cast of EastEnders – so far it’s been perfect.

"Everybody has been so beautiful to me and made settling in easier than I could’ve hoped.

"Stepping into the acting world has always been a vision of mine and doing that with EastEnders as a Slater is a blessing, I'm very grateful.

"Loving every minute of Freddie so far and can’t wait to see what’s in store for him in Walford."

While Chris Clenshaw, Executive Producer, added: "Freddie Slater is a chaotic 18-year-old with a sensitive soul.

"A modern-day lad who’s in touch with his spiritual side. He’s philosophical, accepting, but full of mischief and makes mistakes.

"Bobby is an amazing young addition to the EastEnders cast who brings heart and humility to the role of Freddie Slater and I can’t wait for audiences to get to know him."

Soap watchers will recall that Freddie was last seen in Walford in May 2006 when he and Little Mo, played by Kacey Ainsworth, left to start a new life away from Walford.

Teasing what viewers can expect from Freddie, a spoiler reads: "A bundle of energy and a truckload of trouble, Freddie Slater has a heart of gold but can’t help getting himself into mischief.

"While he’s sweet like his mum, he certainly isn’t shy and manages to cause a stir wherever he goes – but is he a true Slater at heart?"

EastEnders continues on BBC One on Mondays, Tuesdays, Wednesdays and Thursdays at 7:30pm on BBC One.

For the latest on all your favourite celebrities and EastEnders , sign up for OK!'s daily newsletter here.