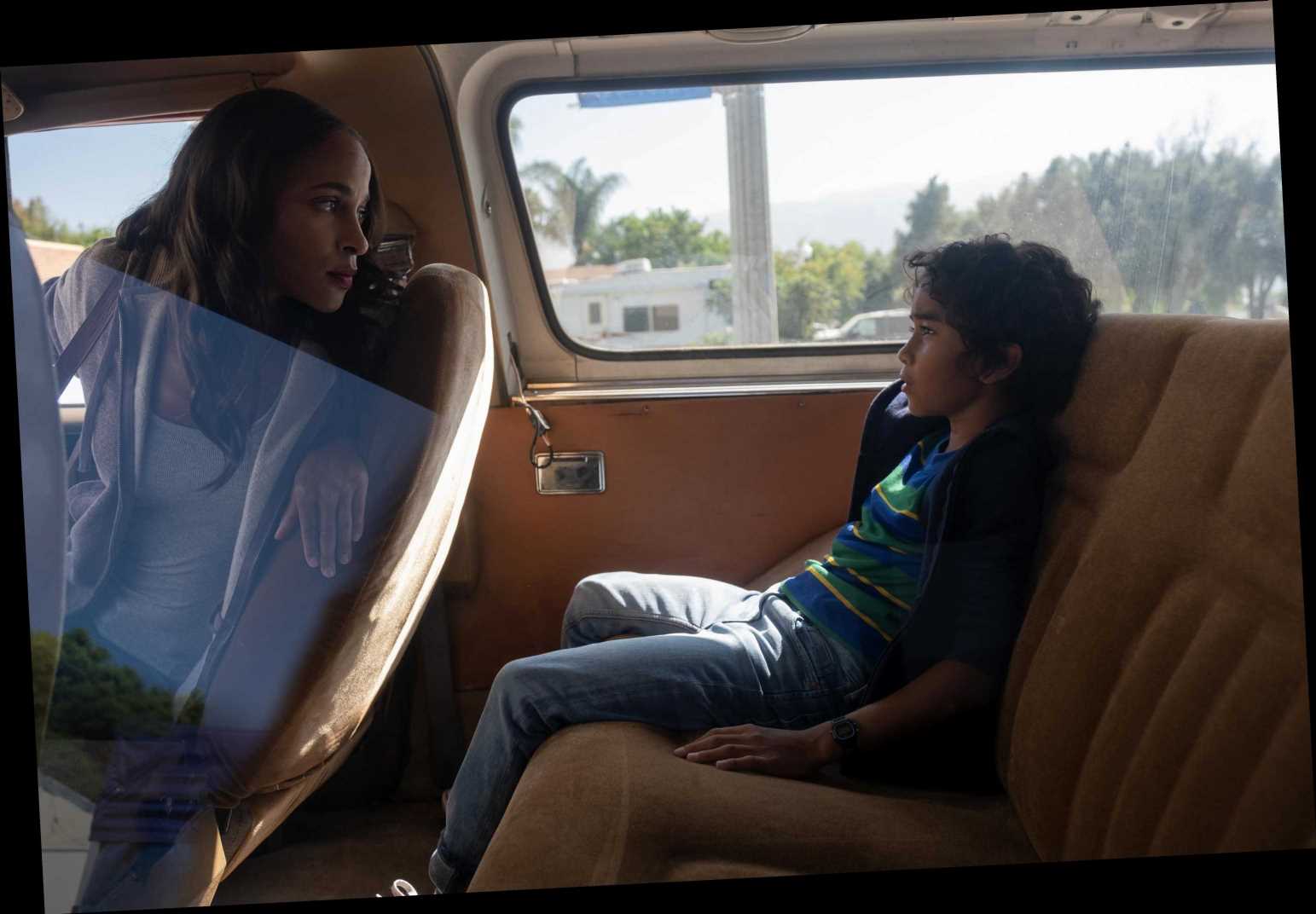 With one key exception, “Blood Moon” doesn’t really try to hide anything. The final Season 2 installment of the Hulu feature-length anthology series “Into the Dark” is even more stripped down than many of its other counterparts. It’s admirable, considering its ostensible main hook. But this is one of the collection’s better efforts because of how much it resists the expectations that come with it.

For those watching in order, “Blood Moon” makes for a nice complement to last month’s Valentine’s Day-themed “Tentacles”: An opening sequence that drops a main character and the audience right into an immediate sense of danger, a young woman starting over in a new town, and the resulting mechanics of hiding a dark secret.

“Blood Moon” swaps out a meet-cute romance for a thoughtful mother-son story, with Esme (Megalyn Echikunwoke) and her 10-year-old son (Yonas Kibreab) arriving in a remote desert town. They need to find some temporary living arrangements and prep for something big happening later in the month. The boy’s name is Luna and the opening credits sequence is all geared around phases of the moon. This isn’t a story withholding information for the means of surprise. It’s relying on the viewer to make some assumptions fairly quickly.

The simplicity of that backstory stretches out to the rest of how “Blood Moon” unfolds. What could easily be a familiar race against time or chaotic creature story becomes a much more engaging look at the logistics of Esme and Luna’s situation. Assuming one glaring detail about their tiny family, how much does that complicate a doctor visit? Babysitting? Friends at school? Food runs? “Blood Moon” isn’t bogged down by this — if anything, there’s certainly room to dig into even more corners of this reality — because it’s not pretending to be any more than a closely observed mother-son tale.

Director Emma Tammi and writers Adam Mason & Simon Boyes also find a way to talk around certain ideas and avoid showing certain details without being coy. Whatever key descriptor you might be expecting someone to invoke, it doesn’t really come. That’s largely because even saying one of those key supernatural terms out loud would shatter the careful family drama tale that “Blood Moon” does an effective job of spinning.

“Into the Dark: Blood Moon”

There’s a certain kind of shorthand in “Blood Moon” that isn’t necessarily innovative, but it does help get across key ideas with minimal effort. The wall calendar with a date circled in an ominous red marker comes across as an obvious signifier at the outset. But the longer “Blood Moon” goes, it’s clearer and clearer that these choices are driven less by a lack of subtlety and more by showing how clear-cut and all-consuming Esme’s drive to protect her family is. The longer that she keeps her local bartending job and the closer the pair come to putting down roots, the interior of their house and the overall emotional tenor of the movie starts to brighten.

Those details also help point to the idea that “Blood Moon” isn’t necessarily driven by dread. Both Esme and Luna know that their monthly preparations are paramount to each of their survival. Still, it’s the banality of getting through the rest of those four-week chunks that’s the real dangerous and uncertain part. The matter-of-fact way that “Blood Moon” shows Esme’s various checklist processes removes a lot of unnecessary mystery and redirects those energies to the family story side of things.

Against Esme and Luna’s natural back-and-forth, the other folks in town come across as decidedly thinner. “Blood Moon” doesn’t use much narrative real estate to turn the tiny interactions and little snippets of those other personalities into much more than plot mechanisms. There’s one exception: an early lifeline who’s a welcome presence whenever he pops up throughout the story. And the lone set of flashbacks manage to do plenty with sparse information to give context to Esme and Luna’s journey. But the remaining handful of pieces are a little flat in how they move things along to their natural conclusion.

In a way, that makes sense, given how much “Blood Moon” is locked into Esme and Luna. That attention hints that this is a story far more interested in the realities of parenting than in responding to the unexplainable. Even extremely vigilant parents slip up, whether it’s taking on more than they think they can handle or giving too long a leash (as it were). No one in “Blood Moon” is infallible, a not-insignificant point, considering what’s at stake. The result is something that flows like the best of the “Into the Dark” chapters: a grounded story with a few fantastical layers, rather than the other way around.

All episodes of “Into the Dark” Season 2, including “Blood Moon,” are now available to stream on Hulu.