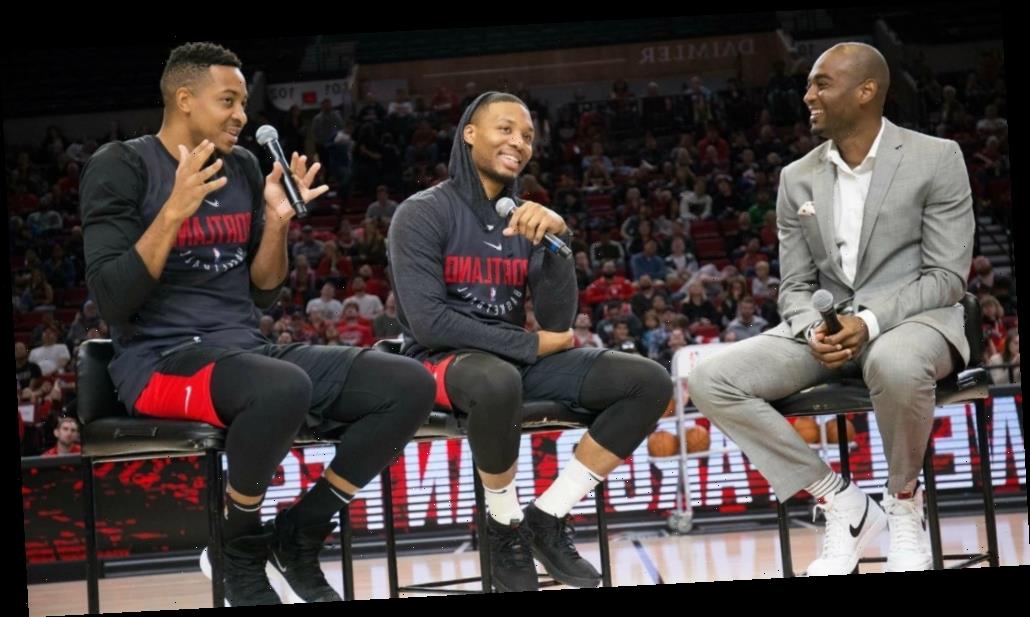 When the Milwaukee Bucks refused to take the court for their playoff match-up against the Orlando Magic Wednesday night, they prompted wildcat strikes that swept the U.S. sports landscape and forced the postponement of games across across the NBA, WNBA, MLB, NHL and MLS. They also turned what was supposed to be a routine telecast — by COVID-era standards — for Zora Stephenson into a breaking-news situation.

Stephenson, the Bucks sideline reporter with Fox Sports Wisconsin, was on the air just before team members read a statement declaring that “our focus today cannot be on basketball,” after the killing Sunday in Kenosha, Wisc. of Jacob Blake by police and the deadly shooting of protestors days later. In a clip that circulated widely on Twitter that evening, Stephenson, reporting live, told viewers, “When you talk about wanting change, all of us have to ask ourselves, what are we willing to give up? You can talk. You can tweet. You can protest. You can donate. But what are you willing to give up until you see that change actually happen?” The Bucks, she noted, were “willing to give up a playoff game.”

Stephenson’s report was not commentary. She was explaining to viewers who had expected to watch basketball that evening why they wouldn’t be.

“I don’t necessarily want to fill you with my beliefs,” Stephenson tells Variety. “I do not feel like that is my role. But I do feel like it is my role to add context and background, and to simply get people to think.”

Since Colin Kaepernick first protested racial injustice on the San Francisco 49ers sideline in 2016, critics from disgruntled fans to the president of the United States have railed against star athletes speaking out on social issues — urging them, as Laura Ingraham did on her Fox News show in 2018, to “shut up and dribble.” Black athletes including Kaepernick, LeBron James and Nascar driver Bubba Wallace have borne the brunt of that criticism.

Likewise Black sports broadcasters have faced harsh criticism — and consequences — when delving into social issues in recent years. But as the player work stoppage demonstrated, those issues, particularly racial injustice, are absolutely entwined with the on-field action those journalists are paid to cover.

Stephenson sees the reporting she did Wednesday night as an extension of the work she’s done covering the Bucks throughout the season.

“My job right now is to tell the stories of the Bucks and the players and the people — most importantly the people — that these athletes are,” she says. “These players are very active in their communities and continue to speak out against injustices.” Thus those issues that the players platform have been part of her coverage “pretty frequently with this team.”

With action temporarily stopped — the NBA confirmed Friday that the players had agreed to resume playoff basketball Saturday — injustice has moved from being part of sports reporting to dominating it.

“We’ve had this conversation before, but it was on a bigger level and a larger platform as of [Wednesday],” says Cari Champion. “What those Black men are essentially saying is, until you stop killing unarmed Black people, we as Black athletes won’t continue to entertain you.”

Champion, who last week launched a Vice TV series “Stick to Sports” with fellow ESPN alum Jemele Hill, says she “feels an obligation” to cover the strikes and the repeated killings of Black people with her work, even if some perceive it as being against the objectivity that she and other journalists are taught.

Earlier this year, Champion abruptly left her role at ESPN after seven years at the company. That decision, she says, was driven largely by her not being allowed to “tell the stories I wanted to tell” at the Worldwide Leader.

“As a Black journalist, as a Black woman, I left a powerful network because I couldn’t freely discuss what was happening in our world today, I couldn’t be my true authentic self,” she says. “I left because of that single reason. It is not fair what is happening, and it needs to be talked about in a way in which we don’t hide it, we don’t dance around it.”

Game 5 of the playoff series between the Los Angeles Lakers and the Portland Trailblazers was one of those postponed due to the strikes. Trailblazers TV analyst Lamar Hurd says he views covering these issues as a natural extension of his job, particularly as the players he works so closely with have grown more vocal.

“Anytime one of our Trailblazer players has spoken on something, I’ve just tried to add to what they say in a complimentary fashion, adding some context,” Hurd says. “If there’s just a statement or two, I try to paint the picture of here’s why Damian Lillard, who is from Oakland, California, said what he said, and this is why he feels the way he feels.”

As a local broadcaster covering an NBA team, Hurd points to the impacts that both he and the players can have in “affecting change” on a local scale, as well as a national one.

“I’m not going to be in Orlando to kneel down, I can’t call the Wisconsin attorney general like the Milwaukee Bucks did, that’s not my role,” he says. “But as we continue to march forward and create positive change, the way we handle it is in all of our areas and all of our NBA cities. Whether you’re a player or broadcaster, if you have a level of influence, leverage that influence to uplift other people.”

Malcolm Jenkins, the two-time Super Bowl-winning safety who recently joined CNN as a contributor, agrees with Champion that now is the time to speak up, the time for Black people to be given a platform. He says his new role with CNN is allowing him to speak candidly about his perspective of what’s going on in the sports world.

“For me, as someone who’s been on the front lines of the social justice movement for a while now, to see where it’s expanded to and to see the amount of power that’s being displayed, to me it’s really unprecedented,” he says. “But with that comes a huge wave of people scrambling for answers, so we need to be able to take this energy and direct it. And I think people are starting to realize too that the gestures and the demonstrations and all of that are great, but we want more.”

Jenkins, who currently plays for the New Orleans Saints, feels that having an active player’s perspective in the media realm is particularly important right now. The public is used to hearing from voices of those who have already retired, which Jenkins says leads to speculation and intentions being taken out of context.

“To be on the ground and to know the ins and outs of what guys are talking about what it’s like, what they’re dealing with, what conversations are being had and to be able to frame it the right way for the public is important,” Jenkins says. “We didn’t have that representation when Kaepernick first started this movement. And all of his ideas and words and what players were doing was taken out of context and the narrative was bent and shaped in ways that players didn’t want.”

Fox Sports Wisconsin’s Stephenson came to the Bucks sideline not as a former player, but as a career journalist with stints as a news reporter at local television stations in Denver and Greenville, N.C. The firm objectivity she was trained to bring to her work does not, she says, conflict with her bringing discussion of racial injustice into her reporting. In fact, the one necessitates the other.

“In the role of a hard-nosed journalists, we do tell stories and we have to tell all sides of a story,” Stephenson says. “What is different about this specific issue is it’s not opinion.”

A reporter who covers a murder or a natural disaster, she notes, is never criticized for expressing empathy or sadness for the loss of life or devastation wrought. In those news situations “it is clear and it is a fact that people are affected, and you cannot help but feel for them — and you will hear journalists express that. So why when we’re talking about Black lives being just as important as the lives of any other race, is it a question of reporters not being objective? It is a fact that my husband’s life, my brother’s life, my dad’s life, my life matters just as much as a white’s life. To me, that is a fact.”

—Daniel Holloway contributed to this report.