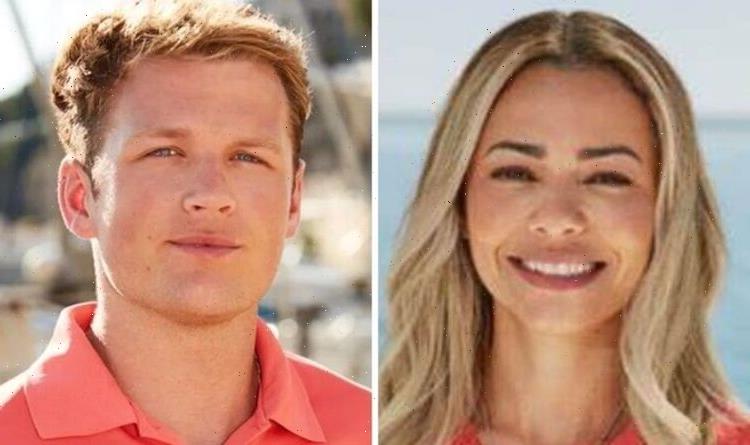 Below Deck Sailing Yacht season three saw the arrival of new deckhand Tom Pearson who made quite the impression when he became too intoxicated and passed out during a party on the boat in the first instalment. However, he was quick to get involved with the crew gossip and has opened up on how Jean-Luc dealt with the revelation Dani was pregnant with his child.

In May 2021, Dani shared the news she was pregnant on her Instagram, posting a photo of her baby bump.

There was a lot of love and support from her fans and Below Deck family, but Dani soon found herself in drama when Jean-Luc refused to believe he was the father and asked for a DNA test.

In an exclusive interview with Express.co.uk, Tom had no issue giving his opinion on the situation and slammed Jean-Luc.

Tom began: “I mean, come on, that guy, I don’t know him personally, so I don’t really want to slam him and slate him.

“But you know, there’s a way to deal with situations, and that is definitely not how you do it, I don’t know.

“If I could say anything to him, it would be you know, you have a responsibility at the time and going out in front of the world and saying ‘Oh, I want to get tested.’

“You’re basically calling her all sorts of things when you say that, especially when she’s telling you ‘No, you’re the only person I’ve slept with it’s only be yours.’

“You just look like a massive douche, so he could have dealt with that a lot better, but I think he’s dealing with it now.

“I don’t know them personally, but I would say hats off to Dani, I think she did a really good job.

“She did a really good job so far with the kid, and I hope that he is involved because you know he should be involved and for putting Dani through all that stress, to begin with.”

During the Below Deck Sailing Yacht reunion in June 2021, Dani made her opinion on the situation clear and didn’t hold back when it came to discussing how Jean-Luc had dealt with everything.

She revealed: “He hasn’t supported me in any way, he thinks it’s not his child, and he doesn’t want to have anything to do with it.

“He seemed supportive, he told me that he would support me no matter what I decided to do, so he was supportive from the beginning, and then he just changed.

“Around December, things just changed, and he was just not interested anymore, and on New Year, I got a message saying, ‘Don’t go around telling people I’m the dad of this child and I want a DNA test.’

“I have all the messages to say that ‘Ok, you want a DNA test, let’s do it, but I will only do it if you organise and you pay for it because it is quite expensive.’

“He hasn’t done anything since January, he has asked about the baby twice or three times and his mum made a horrible comment online, so since then, I just have zero trust in having the family involved in my child’s life.”

In January of this year, he posted: “I can’t let 2022 go any further without sharing some beautiful news.

“An international DNA test that was done a while ago was no small feat [but] I’m happy and proud to say sweet and beautiful Lilly-Rose is my daughter.

“Dani and I have been working and communicating together to the best of our ability; given Dani is a full-time mother and worker, and I being gone for extended periods of time not knowing when I will step back on land.

“This is imperative for the sake of our daughter as she needs both parents in her life.”

Below Deck Sailing Yacht season 3 is available to stream on hayu, with new episodes airing on Tuesday.