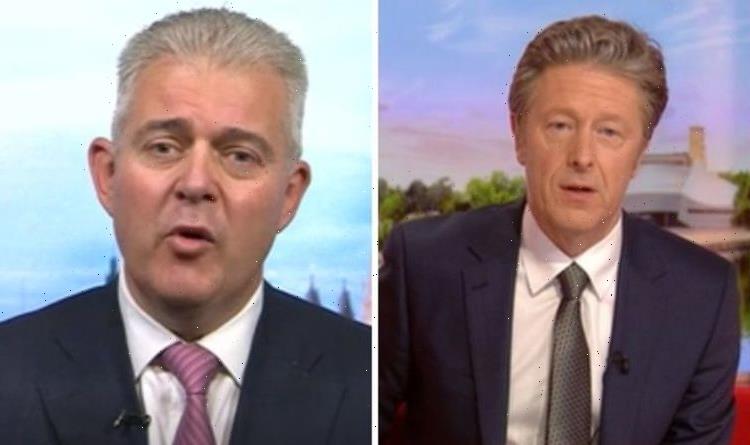 The MP appeared on BBC Breakfast to discuss the Prime Minister after it emerged he attended a “bring your own booze” garden party in May 2020, while the country was in lockdown. BBC presenter Charlie Stayt asked Lewis to explain his view, and the politician insisted Johnson had done “the right thing”. Angry viewers ended up changing the channels though as they became frustrated by the interview.

“Just so we all know exactly where you stand, do you, this morning, offer your full support to the Prime Minister?” Stayt asked Lewis.

“Oh absolutely, yes,” he replied. “I think he’s not just been working and taking the country not just through Covid, but the reforms and challenges that we need to see delivered in a positive way in the years ahead, so absolutely.”

“What did he do wrong?” Stayt asked, as members of the public have recently claimed the government has not taken full responsibility for breaking lockdown rules.

“Well, look, as the Prime Minister himself said yesterday, with hindsight, he regrets going out to the garden and thanking the staff rather than telling them to come back into the office,” Lewis argued.

“I think he was right to do that, recognising, as he said – and something I’ve seen as well – not just the frustration and anger but the upset as well that people have had around there.

“Their view that there’s been one thing being said to people about what we should all do and what they perceive happening in Number 10.”

Stayt cut in to repeat his initial question: “We’re a minute into this interview and you’ve said the Prime Minister has done the right thing – twice. My question was what did he do wrong?”

The presenter later added: “He’s had plenty of time to recognise that he made a mistake, why do you think he said it now?”

Lewis responded: “Well, he recognises the feeling people have got when they’ve looked at what happened and seen the reports-“

“Well that’s because he was found out. This information was leaked,” Stayt argued.

“No, because it is, Charlie, about recognising how people feel,” Lewis stated.

“We’ve got to get the full details and understand what happened.”

As he began to talk about the vaccine rollout, Stayt quickly commented: “I’m going to stick to the point here, I’m going to insist you stick to what we’re talking about, if I may.

“I want to look at the exact wording of the Prime Minister, so help me with this – Boris Johnson’s statement to the House Of Commons [was] ‘I know the rage they feel with me, and with the government I lead, when they think’ – I draw attention to that word, – ‘that in Downing Street itself the rules are not being properly followed by the people who make them.’

“Implicitly, he’s saying that people think it, but in fact, they weren’t being broken.

“Is that your understanding of the Prime Minister’s position?”

Lewis answered: “What he said yesterday is correct because it’s how people feel.”

“So he doesn’t think that – he thinks other people think that?” Stayt pointed out.

Those watching the interview were not pleased by Lewis’ comments, though.

Seanieb1983 penned: “‘Do offer your full support to the Prime Minister?’ Rent-a-Tory – ‘Absolutely’, *switches off* #BBCBreakfast.”

Honey Bee argued: “In life, there are those who are apologists for blatant wrongdoing. The practice is generally referred to as brown-nosing. Brandon Lewis is an apologist and a brown-noser. #BBCBreakfast.”

Benedict fumed: “#bbcbreakfast come on Mr Lewis, if you went outside and people were drinking booze would you take 25 minutes to know it was a ‘work meeting’.”