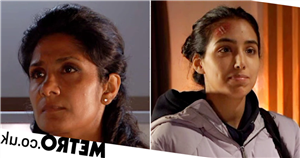 Ash Panesar (Guarline Kaur Garcha) has made the decision to leave EastEnders following another fight with mum Suki (Balvinder Sopal).

This week, Ash was involved in a terrifying ordeal when herself, Ben (Max Bowden), Callum (Tony Clay), Stacey (Lacey Turner) and Eve (Heather Peace) were attacked by Neil and his gang.

As the aftermath unfolded, Suki and Honey (Emma Barton) both arrived at the hospital.

Taking the opportunity to talk to Suki, Honey asked whether she does have feelings for women.

Suki confirmed she had feelings for Honey and after insisting she isn’t gay, angrily stormed out and that evening, slept with Peter (Dayle Hudson).

In the shop, Ash was once again hurt by her mum’s comments towards her sexuality.

After spending the night together, Peter arrived back at Suki’s claiming he had left his watch behind.

Realising her mum had slept with her ex, Ash wasn’t impressed.

Sitting down to talk with her mum, Ash was waiting for Suki to apologise for her actions, but she never did.

To Vinny (Shiv Jalota) and Kheerat’s shock, Ash announced she would be leaving Albert Square.

Her rainbow badge hooked onto her coat, Ash said goodbye to Suki, patiently waiting for that apology – but it never came.

Is this the last we’ve seen of Ash?