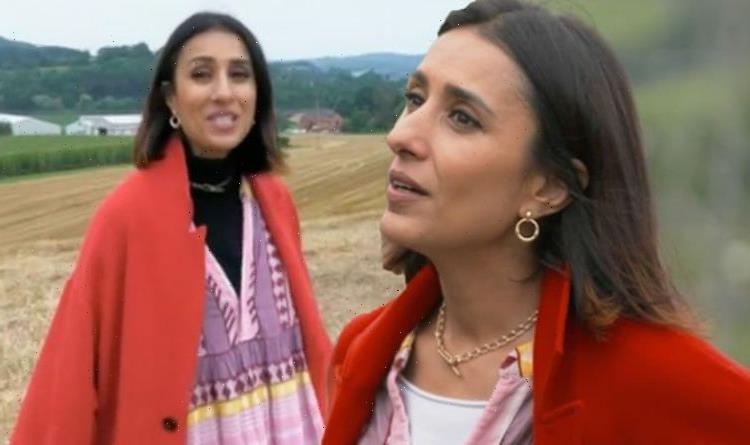 Anita Rani, 43, met with one of the last pickers who harvested hops by hand as she learnt about the great hop revival. From picking hops to meeting pest-eating predators, Anita had plenty of information on how to make a pint. However, many Countryfile viewers were distracted by her choice of clothes for the outdoor activity with some claiming she was more appropriately dressed for city life.

Anita sported a pair of wide-leg trousers which she teamed with a black roll-neck jumper.

She layered a pink, purple and yellow tunic over the top and to stay warm finished off her outside with a bright red coat.

While it was clear Anita was staying warm from the cold, many viewers thought she was not dressed practically.

Howard Morland posted on Twitter: “#anitarani a great presenter on #countryfile @BBC1 but you look ridiculous in such obviously city clothes while hop harvesting.”

During the episode, Anita went on to meet with 86-year-old Sheila Hince, who is one of the last people to pick hops by hand.

“I have been hop harvesting, hard work it is too,” Anita remarked. “I bet it was much harder when you were a girl Sheila. What did you do?”

Inspecting the hops Anita brought with her, Sheila explained: “This was called a hop vine. You picked it like that. Not individual, just sprays.

“People used to say, ‘Oh she can scrat them off well.’”

“Mum used to take me,” Sheila explained. “She had a black umbrella, open it up, stick it into the ground and I had to fill that with hops then I could go and play with the other children.”

Anita continued: “It wasn’t unusual for mothers and their youngsters to pick side by side.

“In fact, until 1953, the Autumn term in Herefordshire schools was even delayed by a few weeks to enable families to harvest the hops.”

Sheila shared images of herself with her daughter and mother picking hops and revealed she was paid a shilling per bushel.

She went on to detail how people from across the country would come to the village and sleep in huts on straw with their own bedding to pick hops.

“It was like a holiday to them, they loved it, they absolutely loved it,” Sheila recalled.

Countryfile continues Sunday on BBC One at 7pm.