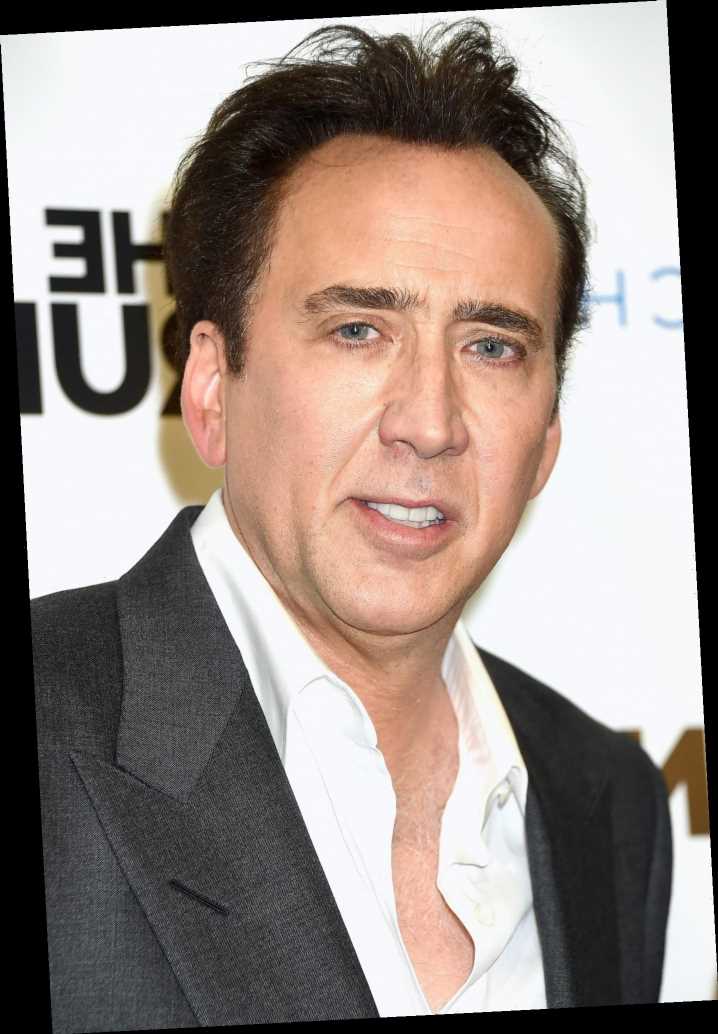 After the ceremony, the couple celebrated with Cage's ex-wife Alice Kim and their son, Kal-El in a small celebration. Cage and Kim both remain very good friends.

Cage has been married four times before, including to Kim. Here's everything to know about his five marriages.

The National Treasure star met Shibata, 27, in Shiga, Japan more than a year ago. The couple was first photographed together in February 2020 while making a visit to Cage's nine-foot pyramid-shaped tomb at a New Orleans cemetery.

Cage told PEOPLE in a statement the pair "are very happy" after they tied the knot in Las Vegas on Feb. 16.

The date of their wedding holds a special meaning, the actor's rep told PEOPLE, as it honors "the birthday of the groom's late father," August Coppola. Shibata, who wore a handmade Japanese Bridal Kimono from Kyoto, walked down the aisle to "Winter Song" by Kiroro — her favorite song.

Cage, who wore a Tom Ford tuxedo, and Shibata exchanged traditional Catholic and Shinto vows with poetry from Walt Whitman and Haiku also included in the ceremony.

Shibata's name on the marriage certificate posted on the Clark County Clerk's Office was listed as Riko Cage.

The actor's first wife was actress Patricia Arquette. The two met at a restaurant in 1987 where Cage proposed to the actress on the spot.

In a November 2018 interview on What What Happens Live with Andy Cohen, Arquette said Cage had asked Arquette for a "quest" on the spot that he could complete to get her to marry him.

"I wrote all these things that I thought were impossible: Getting J.D. Salinger's autograph, a Hill tribe wedding costume, steal me a Bob's Big Boy statue, all of these things," Arquette recalled at the time. "A black orchid, all these things." What Arquette was not expecting was for Cage to complete the list. "One by one they all just started coming to me," she said.

The two did go on to date, although they split, with Arquette saying, "It was just too much and too fast for me at 19."

Years went by and by 1995 Arquette said she called Cage to say, "I'm ready to get married," adding, "It was very romantic."

The two married in April 1995 and their divorce was finalized in 2001.

Cage met Lisa Marie Presley, the daughter of Elvis and Priscilla Presley, at a party in 2000.

The two married in August 2002 and filed for divorce three months later in November. Their divorce wasn't finalized until May 2004.

In an interview with Barbara Walters in March 2003, Cage said there was a "sense, a logic" to marrying the singer-songwriter given they both came from famous and artistic families. (Cage was born Nicolas Kim Coppola, the nephew of Francis Ford Coppola.)

"Oftentimes when you have two people who are very strong and their own personalities, and rather intense, sometimes you can have a hard time meshing," Cage said at the time. "We got into this unfortunate pattern of breaking up and getting back together again." "Where I came out on it is, yeah it's sad, I miss her every day. Sometimes I wish we couldn't have rushed the marriage and sometimes I regret rushing the divorce. But it just seemed like it wasn't going to change," he said.

The Face/Off star said the two remained "friends" after their split.

In 2004, Cage met Alice Kim at an L.A. restaurant where she worked as a waitress. Kim was 19 at the time and Cage was 40 but the pair tied the knot two months later so she could travel with him to South Africa where he was filming Lord of War.

"We did it because we loved each other," Cage told The Guardian in 2013.

The couple married at a private ranch in northern California in 2004. A year later, in October, Kim gave birth to their couple's only son, Kal-El. (Cage is also a father to son Weston, 30, from his relationship to Christina Fulton.)

The actor credited Kim for his stable lifestyle, telling The Guardian, "I made a very clear decision to marry out of my own zip code" when he married Kim. "I married into another culture, and it's interesting because in Korea they call me the Son-in-Law," he added.

The two separated in January 2016, a rep for Cage confirmed to PEOPLE at the time. They finalized their divorce later that year.

In 2018, he told The Guardian their split was "a shocker for me—I definitely didn't see it coming."

By far Cage's shortest-lived marriage, the actor tied the knot to the makeup artist in March 2019 in Las Vegas after a year of dating.

In court documents obtained by The Blast, Cage claims that they were both intoxicated and he "lacked understanding of his actions in marrying [Koike] to the extent that he was incapable of agreeing to the marriage."

Cage also claimed that there were grounds for an annulment since Koike didn't "disclose to [Cage] the full nature and extent of her relationship with another person."

The Oscar winner alleged Koike didn't inform him of her "criminal history," including "additional active criminal proceedings." The document didn't specify what the alleged criminal history or active proceeding was.

Like Cage, Koike was previously married. The actor was granted a divorce in June 2019.