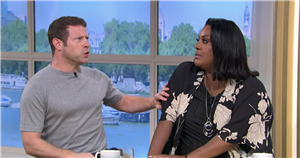 Alison Hammond was clearly dreaming about David Gandy's bottom as she accidentally slipped up when speaking to the star about his modelling career.

David appeared on Friday's episode to discuss his time in the limelight which was kicked off after he was discovered on This Morning at the age of 21.

The budding model had been entered into a competition with the ITV show by his mother, who claimed people had always told her David was good looking and so she signed him up.

After facing stiff competition with a gorgeous line-up David was announced the winner by the former show's host and TV veteran Richard Madeley.

After looking at clip of David on the programme all those years ago, Alison gushed: "You looked so young.

"But it all started here, what's it like to be back 21-years later?"

David responded: "It's such a nice place and it's where it all started.

"This did give me the opportunity as was a great story as well because with models normally they walk into model agencies or get seen on the street but this is a great story to tell from This Morning."

Interjecting, Alison chimed in: "It's lovely when we all see you, we always say 'a***'."

Hoping no one had noticed, she quickly covered up her blunder, correcting: "Or our baby."

Both Dermott and David remained quiet as Alison moved the programme on swiftly to avoid her slip of the tongue being picked up.

But one eagle-eyed Twitter user confirmed what many had been wondering, writing: "#thismorning Did Alison just say she always thought about David Gandy’s a***?"

With another online fan adding: "I thought this too lol."

This Morning airs weekdays on ITV from 10am