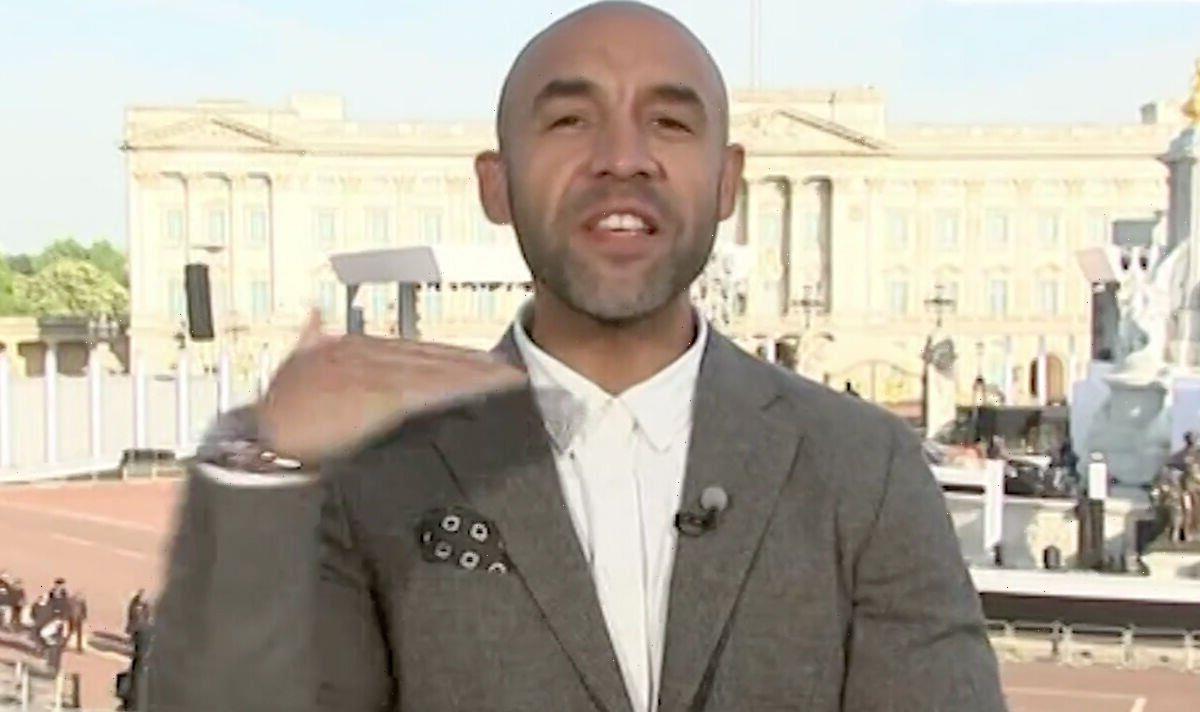 Adil Ray tells Alex Beresford to put on a tie

Reporters up and down the country have flocked to Buckingham Palace today to report live from the Queen’s residence to kick off her Platinum Jubilee weekend. ITV’s Good Morning Britain was no different as resident weather reporter and part-time stand-in host Alex Beresford beamed into the show from London to share the latest forecast. However, when Adil Ray and Charlotte Hawkins spotted he’d opted against wearing a tie, they were quick to mock his wardrobe choice while viewers at home slammed his decision.

“Hello, a very good morning,” Alex said as he kicked off his report outside the royal palace.

Delivering some good news, he went on: “Well, I think we should focus on the now.

“At the moment, it is a lovely morning outside Buckingham Palace. It’s glowing with sunshine at the moment and it will continue as we head into much of today.”

After delivering the news sunshine was set to grace the nation, Adil was quick to try and have a word with Alex.

“Alex, are you still there? Oh, he’s gone,” the GMB host said as the link cut out.

“Dashed off already,” Charlotte quipped before Adil remarked: “Dashed off, he’s probably gone to get a tie, I’d have thought!”

“I’m here!” Alex could be heard shouting as he rejoined his colleagues on-screen, although he probably wasn’t expecting to be berated for his outfit.

Charlotte commented: “One thing that has been noted about your appearance today, Alex, it’s the lack of a tie!

“I mean, hello, you’re right by Buckingham Palace,” she joked as Adil piled on: “Come on! Where’s the tie?”

Alex folded his arms before he joked: “Off with his head!

“I’m so sorry, I will go and find a tie,” he quipped before issuing a cheeky apology.

The ITV weather reporter added: “If Her Majesty is watching, I’m so sorry.”

DON’T MISS:
Katherine Jenkins was left in tears by the Queen gesture
The Repair Shop’s Jay Blades exposes key rule experts must abide by
The Queen’s treasured item she carries to this day from father George

The GMB trio shared a laugh but Adil and Charlotte weren’t done there.

“You should apologise!” Charlotte weighed back in. “We’ve got our best tea set out here and everything…

“And you’re not even wearing a tie, honestly,” she remarked before Adil reassured his co-star he looked fine.

“You look great, mate. You always look great,” Adil said before the trio said their farewells.

While his co-stars took the omission of a tie in light spirits, some at home were quick to brand it “disrespectful”.

Gwenda Bevers said on Twitter: “@GMB It’s a shame Alex can’t show some respect and wear a tie while standing in front of the palace. The queen is an example of respect and dignity and he turns up on such an occasion looking like he’s been out all night on the drink.”

@Ro88ssy even fumed: “Alex showing his obvious contempt & disrespect for the queen & country by not wearing a tie.”

While Jane Cook argued: “Disgraceful that Alex is not wearing a tie. Please make this right as he is not dressed correctly.”