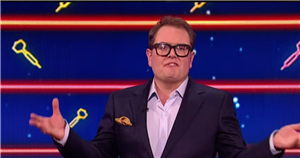 Fans of Alan Carr's Epic Gameshow were left disappointed on Saturday night (July 16) after they noticed that Bullseye aired for a second time.

The popular ITV programme, which sees presenter Alan host a reboot of a popular British game show from the past, usually has viewers glued to their seats.

But some were clearly upset that Bullseye happened to appear on their screens once again.

One person wrote: "Why have we got a 2nd episode of Bullseye when we haven’t been through all the games yet this series?"

Another penned: "Not Bullseye again. Not my favourite."

While a third chimed: "Was Bullseye this bad back in the day?"

However some seemed to enjoy the show, with one person tweeting: "Watching #Epicgameshow," followed by love heart emojis.

Since the new series began, Alan has hosted a reboot of Strike It Lucky, Play Your Cards Right and Child's Play.

However last week, fans were left fairly confused with the game Child's Play and questioned whether it was a classic gameshow compared to the likes of Bullseye.

Jumping onto Twitter, one person said: "EpicGameShow Childs Play was not a classic."

A second agreed and penned: "Never even heard of Child’s Play #epicgameshow #childsplay."

While a third said: "So Child's Play is sort of like Small Talk but not quite."

But other fans disagreed and loved the action that was taking place on screen.

Meanwhile a third wrote: "I remember this from back in the day! #Childsplay #EpicGameshow."

The news comes after TV host Alan opened up on his "rubbish" year after splitting from partner Paul Drayton.

Talking openly about his new comedy tour Regional Trinket on What’s On Scotland, the ITV presenter said: "I wrote [the show] before COVID.

"We had a week to go and it was all written and done. It was about me getting married and Adele getting ordained especially to marry me and Paul.

"But then, during COVID, the relationship fell apart, and I was divorced when we came out the other end."