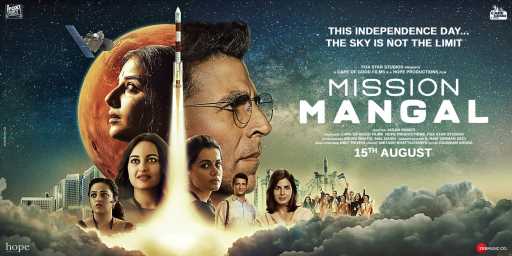 Prolific Bollywood actor and producer Akshay Kumar has again staked out the Indian Independence Day holiday, blasting off today with space drama Mission Mangal. Early word is largely positive on the timely film that’s based on the true story of the Indian scientists behind the country’s first satellite to Mars (aka, the Mars Orbiter Mission or Mangalyaan). With some of the best pre-sales of 2019, a new record could be ahead for Kumar who is already one of the Indian industry’s top-grossers. When the Mission Mangal trailer dropped last month, it generated 22M views in the first 24 hours.

In our exchange below, Kumar recently discussed Mission Mangal and shared his views on the Indian industry as it continues to expand beyond the home market and the diaspora. Also a major growth area for streaming, India is seeing unprecedented investment from the big platforms and Kumar is due to star in Amazon Prime’s action/adventure series The End.

In the meantime, Mission Mangal is also bowing in 250+ North American theaters this weekend, notably including the Smithsonian’s Airbus IMAX in Washington, DC. A rarity for a Bollywood title, the space program storyline was a draw for this picture.

Directed by Jagan Shakti, the Fox Star Studios/Cape of Good Films/Hope Productions title also stars Vidya Balan, Taapsee Pannu and Sonakshi Sinha. Kumar plays scientist Rakesh Dhawan who with Tara Shinde (Balan) leads a motley team as they overcome personal challenges and failures to serve as the brains behind the launch of India’s first satellite to Mars, an achievement that restored the nation’s confidence, and even employed home-cooking tricks to influence the science.

Kumar’s credits include such commercial and critical hits as Baby, Namastey London, Rustom, the Housefull series, Gabbar Is Back and this year’s Kesari which is currently the No. 4 local movie of 2019. A mark of Kumar’s ability to shift genres, Kesari is a period action drama which followed 2017’s comedy/social drama Toilet – Ek Prem Katha ($28M WW gross) and 2018’s social drama Pad Man ($28.8M WW). For the announcement of Amazon’s The End, Kumar appeared on stage, on fire, in Mumbai.

Kumar’s films have been hugely popular abroad, putting him in the company of Bollywood behemoths Salman Khan, Aamir Khan and Shah Rukh Khan. According to figures from Bollywood Hungama, 80 of his titles have made in excess of $750M globally to give him the No. 3 spot on the chart of highest-grossing Bollywood actors worldwide. The number looks set to grow with Mission Mangal this weekend.

DEADLINE: You’ve been known as the “Jackie Chan of India,” but also consistently work across many genres, is there one that you prefer? Why?
KUMAR: I love working across different genres and I have made a conscious effort to juggle between different genres in order to not get tagged or labeled. Over the years, I’ve learnt from experience the importance of doing different genres because earlier everybody would call me just an “action hero” and then once I did comedy that’s all everyone would be talking about. My job as an actor is to entertain (and I hope inspire!) the audience and I like to cater to their diverse set of demands and I cannot do so by sticking to a genre just because I like it, or it works for me. By working in a range of films across genres, I also keep challenging and pushing my personal boundaries, which helps me to keep reinventing myself and avoid any complacency.

DEADLINE: India is such a strong market for homegrown fare. How do you see the evolution of the business in terms of stories that are being told — whether they be historical, action/fantasy or social dramas and comedies which have gained in popularity? What is the audience responding to?
KUMAR: This is a very exciting time for the Indian industry as changing times have reflected a change in the attitudes and perceptions of the audiences. There is no formula that exists for a successful film anymore. Filmmakers and actors have to constantly keep pushing the envelope of creativity to excel at the box office as the audience’s sensibilities have evolved and they are no longer passive spectators. There is a rising demand for unorthodox and unconventional content even with supposed mainstream cinema, and we need to keep coming up with engaging narratives to satisfy the audiences. I feel that it is a great time to be an actor as the diverse varieties of roles one can do these days brings utmost creative satisfaction.

DEADLINE: You are an extremely busy actor with another four movies on deck over the next several months, so what was the major thing that drew you to Mission Mangal?
AKSHAY KUMAR: Before starting the project, I didn’t know much about the Mangalyaan mission. But once the director narrated the story to me, I instantly got drawn to the idea and the astounding facts and statistics of the mission. In addition to that, the film is a good blend of education, entertainment as well as inspiration for the audiences that will create an instant connect… What left me in awe was that this mission was made a success by people from ordinary backgrounds achieving an extraordinary feat. Particularly, the character of Rakesh Dhawan intrigued me due to his ability to be a compassionate team member as well as a passionate leader in the mission.

DEADLINE: Is this a story that is well known to the public at large? There’s also a strong female empowerment message here.
KUMAR: One of the things that really caught the public’s and my attention when photos from the Mangalyaan mission were released was one particular photo of these sari-clad women from ISRO (Indian Space Research Organisation). What really connected with anyone who saw that photo was the fact that the women in the photo were regular ladies — they were mothers, sisters, wives, etc, but they were also the scientists behind Mangalyaan. They were sincerely ordinary people doing an extraordinary thing.

So whilst people may have been aware that India was successful in sending a rocket to Mars, they may not be aware that India achieved this feat in the quickest amount of time and with the smallest budget in comparison to NASA, China and Russia.

Also, what people may not be aware of is what transpired behind the scenes to give effect to this incredible mission. The blood and sweat of the scientists and engineers who worked day in and out towards the success of this mission is what needs to be told. This is what our film showcases. How a team of underdogs worked together to make the impossible come true and how they use home science in this space mission and make the best of the limited resources available to them and achieve the impossible. How they battled the challenges and hurdles in order to achieve this moment of glory and pride for India.

DEADLINE: Many Indian actors are highly associated with particular holidays. What is the significance of having this film release timed to India’s Independence Day celebration?
KUMAR: Like the story of Mission Mangal, the story of India’s independence is also one of inspiration… This film celebrates both imagination and curiosity and I hope the film inspires generations to come and we have more people aspiring to be scientists. A great coincidence with the release date, which we honestly did not plan, is that the day the film is releasing also happens to be the 50th anniversary of ISRO.

I personally don’t think dates are that important which is why I have films coming around the year. Holidays are a good occasion for families to come to the theaters and watch the films together, but I firmly believe content drives the film. If the content is good audiences will come to the theater regardless of dates or holidays.

DEADLINE: Stars like yourself have such massive fanbases at home; how important is it to you that your films travel, and do well, overseas?
KUMAR: When a film is made on such a big scale and with such a strong narrative it’s every person’s dream that their film is seen by as many people as possible. Our audience is no longer limited to the domestic audience given Indian cinema’s vast distribution reach and appeal. We are catering to the diaspora and also non-South Asian audiences too. Obviously, it is very important that the film does well overseas especially if the story has a global appeal. Mission Mangal is one such story which I believe will resonate with people of all age groups, gender and nationalities.

DEADLINE: You’re doing a series with Amazon later this year. With India such a growth market for streaming, and the investments being made, what is the impact on the local industry?
KUMAR: I always see it as positive as this gives us an extra platform for audiences to experience our cinema. Even as content from all over the world is streamed on OTT platforms such as Netflix and Amazon Prime, this helps in breaking barriers. It also encourages more global consumption for Indian content creating an audience in countries far and wide which were earlier inaccessible. As it increases the options for the consumers, it also puts pressure on the content creators to constantly innovate to remain in the race. These online platforms have also led to the discovery and re-discovery of some of the best talent we have in our industry. I don’t think there is a threat to the existing infrastructure of Bollywood due to the OTT platforms. I strongly believe that, if the content is good, it will definitely thrive irrespective of the medium or the platform.