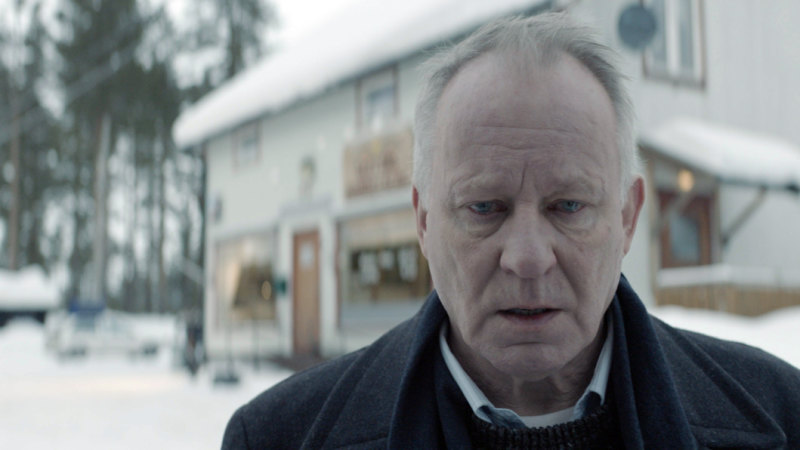 "I'm the indoor guy," says Stellan Skarsgard. "Petter is the outdoor guy. We're very different there. I really like the city and the pulse of the city. He's the kind of guy who puts on his skis and then for two days he crosses the mountain, kills with his bare hands a reindeer, tears it apart with his teeth and then goes home and puts food on the table. I don't do that."

So how long would Skarsgard survive in the Scandinavian wilderness? "Without catering?" he deadpans. "I don't know. A week? No, I would not survive at all." 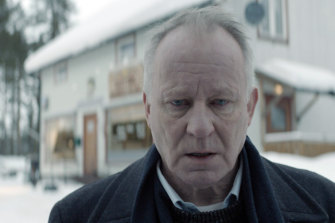 Out Stealing Horses is the fifth film Skarsgard has made with Norwegian director Hans Petter Moland. While earlier films such as the revenge thriller In Order of Disappearance have certainly required him to get down and damp in the snow, Out Stealing Horses is a film immersed in Scandinavian nature, where every twitching leaf or rolling log tells its own fragment of a story of longing and regret that the stoic characters would never tell out loud.

It is based on a 2003 novel by Per Petterson that one review described as "landscape fiction … bleakly fixed in Nordic geography". Skarsgard had loved the book's "poetry and beautiful way of telling the story", he says. "And with Hans Petter's script, I could see that he was trying to find a cinematic version of that."

Skarsgard plays Trond Sander, a man of 67 who has retired to a cosy bungalow in a woodland hamlet following the death of his wife in a car accident. His days are simple. He eats well; he stokes the woodburning stove; he makes inexpert attempts at fixing things and he reads prodigiously, mostly from Dickens, in what seems to be a premature preparation for a peaceful dotage. When his neighbour Lars (Bjorn Floberg) appears at his door, however, he is jolted out of that false tranquillity. He knows Lars: when he was a boy, he and his adored father would spend summers in a rustic forest cabin near Lars's family farm. Lars's older brother Jon was his mate.

Thus begins a rolling series of flashbacks to 1948, when Trond was 15. One early morning Trond (now played by Jon Ranes) meets Jon to go "stealing horses" – not really stealing, as he explains to his father afterwards, but catching and riding horses set to graze in the forest – and is shocked when his friend has a fit of seeming madness, howling like an animal. His father (Tobias Santelmann) tells him what he has heard at the local shop: young Lars shot his twin brother dead with Jon's hunting rifle during a game of chase. 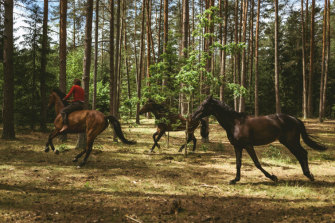 There is a funeral, after which agricultural life ostensibly resumes its expected seasonal rhythms of cutting and binding; the dead boy's mother (Danica Curcic) works as hard as anyone. Nobody thinks this is strange. The whole country is engaged in a collective forgetting, a point the novel makes more clearly than the film does; the Nazi occupation ended only three years earlier and there are traitors everywhere, even here. Trond's tough, capable father has his own history, which will be revealed in another layer of flashback sequences; nobody mentions that, either. Nor will the death of a 10-year-old boy be the last catastrophe of the summer: there is injury, heartbreak and betrayal to come. It is only half a century later that Trond realises how deeply wounded he remains.

Moland delayed taking on Trond's story for years. "He harbours so much rage," he says. "There is a moment when we leave him as a boy when he thinks he is now capable of moving on. And he does move on, but you get the sense that where we leave him as a young boy is where he remains mentally at the point where the film starts. I didn't know if I wanted to go in there. I'd grown up partly on a farm in the middle of a wooded mountainside far away from everybody else and it was like revisiting my childhood landscapes. It can be oppressive if you're an 11-year-old boy and you live 13 kilometres from the closest village, then occasionally you feel like you are in the middle of nowhere. Which is exactly where you are. It's not a trauma as such. More just a question – do you want to go there? And now it was the right time."

Making films is a leap of faith.

Several other writers had tried to adapt Petterson's novel. Moland hasn't read any of those earlier drafts, but Skarsgard has. "Unfortunately they made the mistake of focusing on what's actually happening in the story and that's not much," he says. "It can't live on events." Moland conjures atmosphere with long sequences in wild places and an evocative score as unsettling as warning rumbles of thunder. In one startling moment, a montage of jagged images from the past cuts through the fabric of the present; in another dreamy sequence, the weather becomes Trond's nightmare as snow whirls through his bedroom. When he wakes up, the sunshine on glistening snow is shockingly joyous.

"I think that part of what is strong and powerful when you are out in nature is that it is a very sensorily powerful thing," says Moland. "The sounds, the smells: everything really piques your senses. You can be really warm in your body but your face can be very cold: it's not dangerous, you know, but it's a different experience and it makes you feel vibrant and alive. It's hard to convey that experience of all your senses being open, as Trond's are at the beginning. I think I was very specific about sounds, like the sound of the wind as Trond is lying in bed or his mother washing his face. But making films is a leap of faith."

Inscribed in this detail is the painful story of a son who feels betrayed, both by his father and by the machinations of history that stole him away. When Trond was a boy, his father told him to follow his lead in picking stinging nettles with his bare hands. "You decide for yourself what will hurt," he says. Over a rare shared coffee, he tells the local mechanic that the only way he can approach any task is to ask himself how his father would have done it. That clearly hasn't sat well with his daughter; parenting doesn't compare to building a shelf. It hasn't helped him deal with what hurts, either.

We all need to reach a moment of forgiveness, agrees Skarsgard. "But parents can make it easier or harder. If a parent has put himself on a pedestal to begin with and tried to portray themselves as infallible, then it's harder. My parents, whom I love and who were wonderful, were equals with the children. We knew they were flawed and that they could make mistakes and that means it was much easier. I didn't even have to have a teenage rebellion. There was nothing to rebel against."

So what did he learn making this film? "l learned how to handle a chainsaw, so that's something," says the indoor man drily. "I doubt I will ever use it again. But I have that."

Out Stealing Horses screens at the Scandinavian Film Festival. scandinavianfilmfestival.com