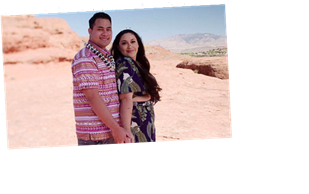 If you’ve been watching season 5 of 90 Day Fiancé: Happily Ever After, then you probably know something about the major drama surrounding Kalani Faagata and Asuelu Pulaa’s family over money. In a number of episodes, the topic has come up about how Asuelu’s mother requested money, and most recently, Asuelu was asked to contribute $1000. When Kalani and Asuelu reveal that they only have $100 to give, things spiral out of control.

Kalani and Asuelu have two young children, so they clearly don’t have a whole lot of extra money to throw around, but that doesn’t seem to matter. Not to mention, Asuelu is only working part-time, and Kalani is currently a stay-at-home mom. Asuelu and Kalani decide to take a family trip to Washington to see Asuelu’s mother, Lesina, and his two sisters, Tammy and Rosa. The trip is more than eventful for all the wrong reasons from the start when money is brought up. Asuelu’s mother asks how much he brought, and he says he has $100, not the $1000 that was requested.

Kalani explains that Asuelu is only working part-time, and she’s at home with the children. Asuelu’s sister, Tammy, asks why Asuelu can’t work full-time to provide for everyone, including his family back home in Samoa. Asuelu assures her that he’s been looking for full-time work.

“My mom needs money, and I have lots of family in Samoa, they need money because my family’s poor,” Asuelu tells producers. “I know that my family very disappointed, but I want to support my wife, and also the boys. We don’t have really much money to spare.”

Lesina brings up Kalani’s parents, and mentions that they have money. Asuelu doesn’t want to rely on Kalani’s parents for everything, and it’s implied that they should help more so Asuelu can contribute more back home.

Kalani meets up with Asuelu’s mom and sister

Nothing is yet resolved, and Kalani decides to meet up with Asuelu’s mother and his sister, Tammy, about matters. She’s hoping to “talk some sense into them” with this meeting, but it doesn’t go that way.

“I’m here to tell you guys, I just don’t know why you all feel entitled to me and my family’s money. And that, however you feel, feel that way. But at the end of the day, it is going to be what I say,” Kalani tells them.

Tammy tries to tell her about Samoan culture, and Kalani clearly understands that, but feels this has gotten a little out of hand. “Just give me money, that’s all I want,” Lesina tells Kalani. She also brings up the fact that Kalani’s parents can “support and help” them.

Tammy says she feels Kalani is trying to “change” Asuelu. She also mentions that Kalani can work as well, and she even brings up divorce. To make matters worse, Lesina also says she wants Asuelu to go back to Samoa. Kalani walks away in tears, and Tammy tries to walk after her and lunges toward her direction. She also says, “I’m gonna beat you up.”

Kalani tells Asuelu what went down, and it leads to a fight between them

When Kalani returns to tell Asuelu how things transpired, it doesn’t go well. She tells him about the conversation, saying they think Kalani “brainwashed” Asuelu since they can no longer control him. Aseulu seems shocked, and says it’s making him “mad.” Kalani relays all the pertinent details to her husband, including that his mother wants him to go back to Samoa.

Kalani mentions that Asuelu doesn’t need to have a relationship with them, and Asuelu questions that. “Because they’re a*******,” she says. Asuelu tells her not to call them that, and then says they will wait until they understand. Kalani also mentions to Asuelu that Tammy tried to act like she was coming at her.

“If she would have grabbed me, I would have knocked her out,” Kalani insists. Asuelu asks if Kalani thinks she could really knock Tammy out. “What about if my sister knock you out?” Asuelu asks her. She rolls her eyes, and says, “No.” She also mentions she would beat Asuelu in a fight, and that she would “drop” Asuelu’s sister if she would have touched her.

Kalani gets really upset, and walks away. Asuelu makes some not so appropriate comments, including, “I think you’re f****** crazy.”

Kalani tells her sister, Kolini, she wants to get out of there, and mentions what went down with Asuelu’s family. She also details what just happened with Asuelu, and says he turned everything around about who would win in a fight.

“I’m not shocked,” Kolini says. “But at the same time, wow.” Kalani starts to cry, clearly frustrated from the day’s events. And let’s be honest, who wouldn’t be in her position?

“This is just crazy,” Kalani says. “And I think it’s just always going to be crazy. Like I see progress and I have hope thinking that, I’ll be able to fix it or change things, and I’m not going to be able to.”

Kolini clearly feels for what her sister is going through. “The fact that your sitting here crying for this person that like you are too good for, it’s sad to watch. I’ve been quiet like this whole time, but I don’t want kids to like hold you in a situation that you don’t want to be in,” Kolini tells her sister, and she also cries over the situation.

Kalani says she needs to think about what she will do. Hopefully, they’ll be able to work things out as a family, and things don’t get any worse from here.