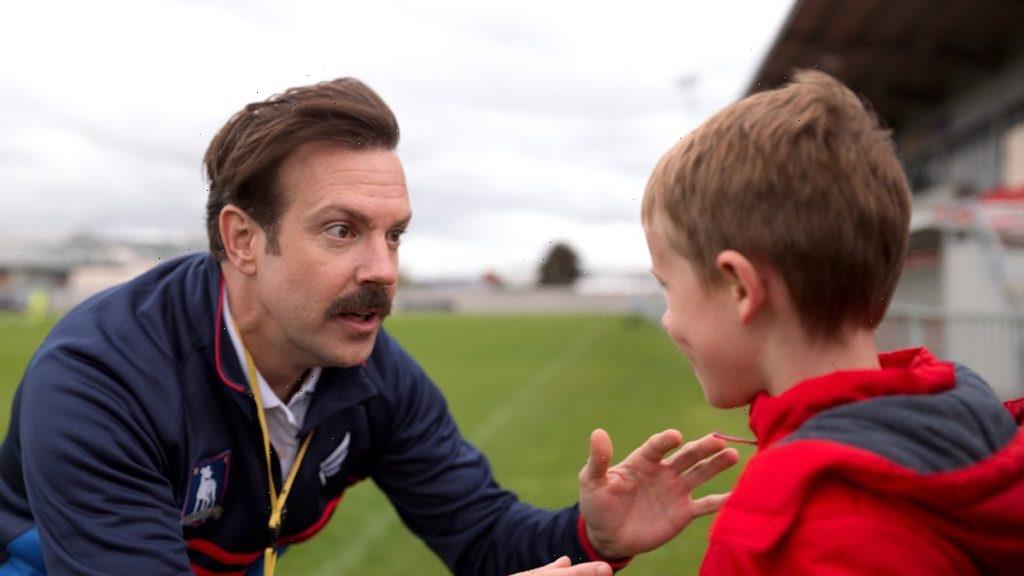 Ted Lasso already picked up three Emmys ahead of the big ceremony on Sept. 19. After winning Emmys for casting, editing and sound mixing at the Creative Arts Emmys, the show is expected to sweep the comedy categories on Sunday. Rolling Stone writer Alan Sepinwall handicaps Ted Lasso and Jason Sudeikis as the favorites in their categories, and Showbiz Cheat Sheet agrees. Last year’s Schitt’s Creek sweep bodes well for the debut show.

1. ‘Ted Lasso’ had a lot in common with last year’s winner, ‘Schitt’s Creek’

Schitt’s Creek was the story of the Rose family, who lost all their wealth and assets except for the town of Schitt’s Creek, which Johnny Rose (Eugene Levy) bought as a joke. At first Johnny, his wife Moira (Catherine O’Hara) and children David (Dan Levy) and Alexis (Annie Murphy) had a hard time adjusting to small town life. However, the good natured residents of Schitt’s Creek won them over.

The title character of Ted Lasso is similarly good natured. Ted (Jason Sudeikis) was an American football coach. AFC Richmond owner Rebecca Welton (Hannah Waddingham) initially hired Ted to make the team lose as revenge on her ex-husband (Anthony Head). However, Ted’s can-do spirit actually won the team over and turned things around. If Schitt’s Creek is still fresh in Emmy voters’ mind, they may warm up to Ted Lasso, too.

2. With ‘Schitt’s Creek’ vacating the throne, the Emmy is up for the taking

The best news for Ted Lasso is that Schitt’s Creek ended. It was like Frasier back in the day or Breaking Bad on the drama side, sweeping everything. Of course, 2020 was the only year Schitt’s Creek swept the Emmys. It took 6 seasons to build up its following.

Schitt’s Creek debuted on Pop! Under the radar as its first original scripted show. Critics and fans started coming around to it several seasons in. Schitt’s Creek got its first Emmy nominations in season 5 but it took Emmy voters until the final season to lavish it with awards.

3-5. ‘Ted Lasso’ actually has some advantages over ‘Schitt’s Creek’

Where Schitt’s Creek was a slow burn, Ted Lasso was a hit right out of the gate. Apple TV+ gave it a considerably bigger platform, plus it was based on a pre-existing character. Sudeikis created Ted Lasso for NBC Sports to promote their airing of the Premiere League soccer games. When adapted into a TV series, Ted became nicer. That proved to be a winning hook for the show as audiences respond to Ted’s good nature.

Having a new season out during voting season may help Ted Lasso, too. Season 2 has proven controversial amongst fans. Viewers were mixed on the Christmas episode airing in July, and the introduction of the concept of “toxic positivity” provoked debate. No matter what side you land on, this kept Ted Lasso trending every week as new episodes dropped.

That’s a great reminder for Emmy voters. And hey, if you feel the show has gone off course in season 2, maybe that reinforces how great season 1 was!

Rolling Stone says the show is a shoe in for Outstanding Comedy and for Sudeikis as Outstanding Lead Actor. Four Supporting Actors are Emmy Nominated: Brett Goldstein, Brendan Hunt, Nick Mohammed and Jeremy Swift. That’s half the category, so even if they split the vote, someone from Ted Lasso is gonna beat the other four actors.

Likewise, three directors are nominated. The writing team has two nominations, and both Waddingham and Juno Temple have Supporting Actress nominations. The AFC Richmond team has Emmys covered.