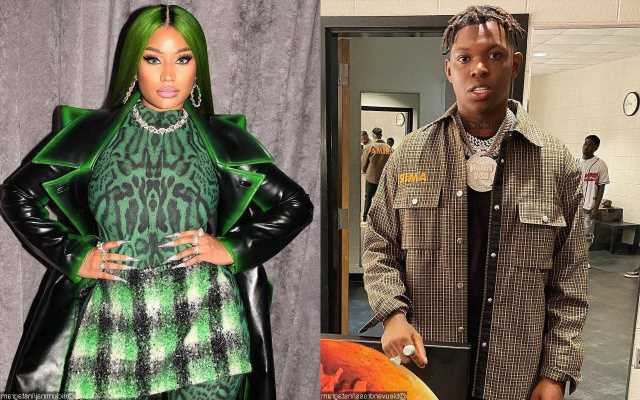 In a new interview on Angela Yee’s ‘Lip Service’ podcast, the ‘You’re Mines Still’ rapper shares what it was like to deal with the ‘Super Freaky Girl’ hitmaker when they collaborated for ‘Love in the Way’.

AceShowbiz -Working with Nicki Minaj is something that Yung Bleu won’t forget in his music career. In a new interview with Angela Yee, the rapper shared what it was like to deal with the “Super Freaky Girl” hitmaker when they collaborated for “Love in the Way”.

Of the experience, Blue said on “Lip Service” podcast, “That situation, it was fun. It was crazy.” Even though he appeared to be hesitant on elaborating, the “You’re Mines Still” spitter added, “Just the whole situation like, like you know what I’m saying? Just dealing with – you know? Just dealing with Nicki.”

The 28-year-old rapper then shared that Nicki asked for his opinion on the outfit that she would wear for their music video. “She ain’t make me, she was just asking me, and I was like, ‘Do you really care?’ Like I ain’t really know if it matter what I pick but it ended up [that it] did though. What I picked she wore though,” he recalled.

When he said that working with the Trinidadian star “crazy,” he was referring to the process to create the music. “I was just talking ’bout like just far as like the whole build up to the song, it was just, you know, just so much going on to actually get the song out,” he shared. “You know like, up and down, top secret.”

Born Jeremy Biddle, Bleu said that it took six to seven months for Nicki to approve the release of the song. He noted that he initially thought the project was never going to be out. “She just always had something else to do,” Blue said.

Blue also said that the two argued a lot behind-the-scenes. “I ain’t gon’ lie bro, I’m gon’ just tell y’all, we was arguing a lot. Nicki cussed me out like so many times. Like for real though, she real deal cussed me out,” he divulged. He also claimed that the “Anaconda” raptress cursed him out about three times before they released the single, adding, “I was just blowed.”

Of their first argument, Blue revealed, “I was just texting her about the song. I was like, just trying to get the song. Sometimes she’d just forget that we even working on a song. I think. Months would go by and I’d just tap in and she was like, man I forgot what she said but she went off on me.”

Blue, however, things were okay between them after he apologized. “I came back and apologized like a week later. I was just like, ‘Man, my bad.’ I aint really know if you was seeing my messages cause I know you be busy,” he shared.

“She cursed me out like two more times after that, you feel me? Then we’ll be back cool, so I’m just like, ‘Oh this just how she-.’ I feel like Nicki a really good person though. I always feel blessed and appreciate her for even like, you know what I’m sayin’, working with me, all that just extra that come with her,” Blue raved. “I ain’t really no – I got tough skin. Being a fan of Nicki for so long, I know she a diva. What you expect? I wasn’t really trippin’.”