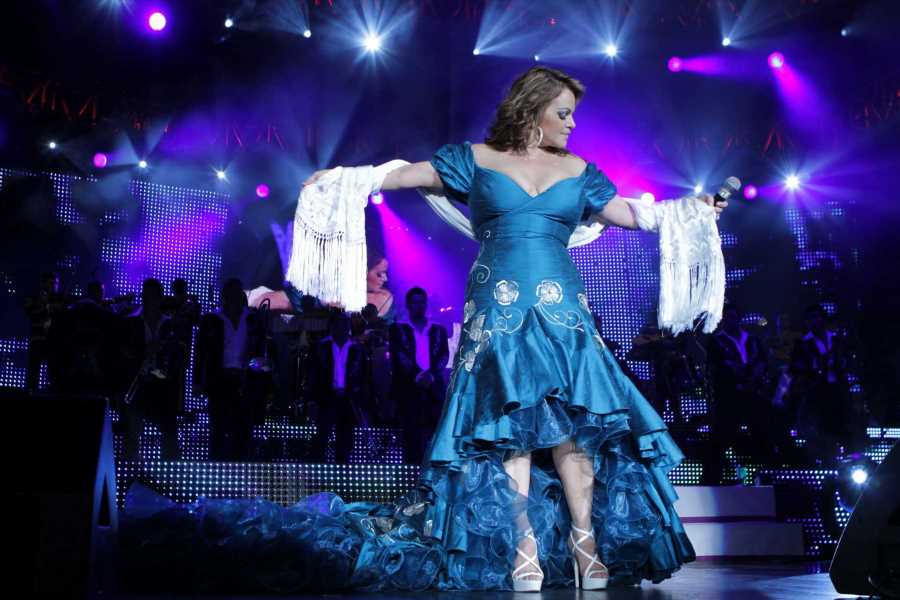 On December 9, 2012, Mexican banda superstar Dolores Janney “Jenni” Rivera Saavedra shocked millions when she tragically died in a plane crash. The business jet, carrying seven people onboard, took a nosedive minutes after taking off from Monterrey, Mexico, just hours after performing her sold-out and final concert in Monterrey, Mexico. There were no survivors. Jenni Rivera was 42.

Seven years later, the singer made national headlines when she became the first-ever regional Mexican music star to appear on a billboard in Times Square. It was a celebration of her latest release, “Aparentemente Bien,” or “Apparently Well”: her first posthumous single since her untimely death. Rolling Stone met with Doña Rosa Rivera, the singer’s father Don Jorge Rivera, and Rosie Rivera at Manhattan’s Roosevelt Hotel, shortly after they witnessed her billboard reveal.

“I felt an inexplicable sense of happiness. It was a huge surprise,” says Doña Rosa Rivera of seeing her daughter. “I don’t know if she ever imagined [the feat],” adds Doña Rosa’s other daughter, Rosie.

“There are models of size two [on the billboards], and then there was my sister,” she adds. “A real Mexican woman who represents Latinas! I felt like a complete fan.”

Initially written by “Despacito” co-author Erika Ender and Argentina’s Alejandro Lerner, Jenni recorded the vocals and arrangements to “Aparentemente Bien” before her passing, in different studios throughout the U.S. They were part of a treasure trove of recordings, unearthed from the singer’s computer by her brother and producer, Juan. The lead single off an upcoming posthumous album, due out in 2020, the new song — dropped July 2nd, or the day the singer would’ve turned 50 — is a testament to Jenni’s enduring legacy.

Even after her death, Jenni continues to be the leading lady in regional Mexican music. “Aparentemente Bien” debuted at Number One on YouTube, and clocked four million views in just one day; a month after its release, it has amassed over 24 million streams. With over 2 million YouTube subscribers, she continues to outpace regional Mexican music legends on the platform, from Los Tigres del Norte to Los Tucanes de Tijuana. And though she helped carve out a space for more women to participate in Mexican folk genres, no other female performer has been able to top, much less rival, Jenni’s towering status as La Diva de la Banda. In fact, the presence of women in banda, and regional Mexican music at large, remains visibly sparse; and Jenni’s recent success with “Aparentemente Bien” only emphasizes that void.

Born in Long Beach, California to Mexican immigrant parents, Jenni Rivera was raised to appreciate norteñas. In the Eighties, Don Jorge built his own record label, and famously launched the career of legendary King of Corrido, Chalino Sánchez. “I used to force Jenni to sing the choruses to songs we recorded,” Don Jorge recalls. “She didn’t like it at first, but then she immersed herself.”

Jenni’s singing career was nearly curtailed when she became a teen mother and married her high school sweetheart; she later professed that he subjected her to verbal and domestic abuse. Upon ending her tempestuous first marriage, Jenni recorded her first song in 1992, then signed to Capitol/EMI and recorded her full-length debut, Chacalosa (Party Girl) in 1995.

Despite facing extreme opposition in the male-dominated circuit of regional Mexican music — and a patriarchal Mexican culture at large — she rose to prominence against all odds. In a 2011 interview, she recalled a radio programmer who dunked her CD in the garbage, directly in front of her face. “Her husbands and industry men [called] her fat, worthless, ugly,” Jenni’s father reflects. “They told her she would fail … but from her suffering came her triumph. Today, I am in awe in everything she did.”

“They wanted to have her trampled,” Jenni’s mom chimes in. “But she stood up.”

Jenni pointedly fired back at machismo in her early hits, all the while empowering women and embracing her chacalosa reputation. In 2006’s “Las Malandrinas,” La Diva embodies the machista’s biggest nightmare, raising hell as a party-starting beer-chugger with her equally raucous girlfriends. And on 2001’s “El Nopal,” she deftly claps back at a real-life promoter who belittled her skills and appearance.

“When she would get into problems, or the tabloids began to write gossip about her, Jenni told herself she wouldn’t get into any more fiascos. Instead, she would make money and win royalties,” recalls Rosie. “With any rivalry she had, she would answer back with a song filled with ovaries — and she learned that from battle rap. She particularly loved Tupac and Biggie.”

Her musical prowess and SoCal grit eventually paid off, after she became the biggest-selling regional Mexican artist with her 2010 album, La Gran Señora. She would finally earn the praise of many men in her field, including the King of Ranchera, Vicente Fernández. She was also the first female banda performer to be booked at L.A.’s Staples Center; and one occasion, 80,000 people paid to see her in concert in Querétaro, Mexico. In 2010, she was appointed spokesperson for the National Coalition Against Domestic Violence in the United States. After her passing, the City of Los Angeles declared August 6th Jenni Rivera Day.

“[Jenni] became an activist without planning it,” Rosie tells Rolling Stone. “She said, ‘If I hold a microphone, it becomes my responsibility.’”

In the wake of Jenni’s death, women have only grown more visible within the varied regional Mexican music landscape: take the Mexican cumbia band Los Ángeles Azules, bolero queen Natalia Lafourcade, or the 14-year-old mariachi star Ángela Aguilar. But it remains far more rare to see women participate in banda music; banda songs, like corridos and narcocorridos, often chronicle the debaucherous lives of drug-lords, excess and crime, which are still controversial topics for women to sing themselves.

“Women making music have always existed, and they continue to exist and they will always exist,” said Fresno, California singer Helen Ochoa in a 2016 interview. The 34-year-old banda singer made her breakthrough that year with her debut, Si Yo Fuera Un Chico, or, If I Was a Boy; at the time of release, she was the only female artist to be signed to the norteño imprint, Gerencia 360. Then there’s Mexico City banda-urbana provocateur Victoria La Mala, who counts influences in ranchera royalty Paquita La del Barrio, and the original Queen of Tejano, Selena. Both Ochoa and La Mala deploy the same unflinching feminist approach as La Diva; and yet, when compared to men in the mainstream, they continue to fly under the radar.

Like the late, great Selena, or Ángela Aguilar, who is the daughter of the legendary ranchera singer Pepe Aguilar, it’s worth noting that Jenni also had the support of her powerful musician family. Of course, without undermining the bona fide talent these women possess, it paints a sobering picture for would-be regional Mexican divas — who still might not stand a chance without the endorsement of powerful men. However, at the time of her career, Jenni’s dauntlessness was unprecedented, not just in banda, but any Mexican genre to date. It was her courage alone that truly made her into a star.

The “Aparentemente Bien” music video follows an animated butterfly flying away from the site of Jenni’s plane crash in Iturbide, Mexico; it then flutters through the various hardships and life-changing moments in the singer’s life, played by multiple actors. “She loved butterflies because of their metamorphosis,” Rosie explains. “A caterpillar goes through a very difficult and painful process, but when you go through it, you fly. We are now able to see that [Jenni] has taken on different wings after her passing.”

“My sister was the underdog that wasn’t supposed to make it,” adds Rosie. “But because of her strength, she reached great heights. She was able to live that.”

In celebration of the singer’s 50th birthday, the Rivera family is scheduled to go on tour later this year. The family is also plotting a live concert documentary, slated for release in December 2019.

Interviews were originally conducted in Spanish.