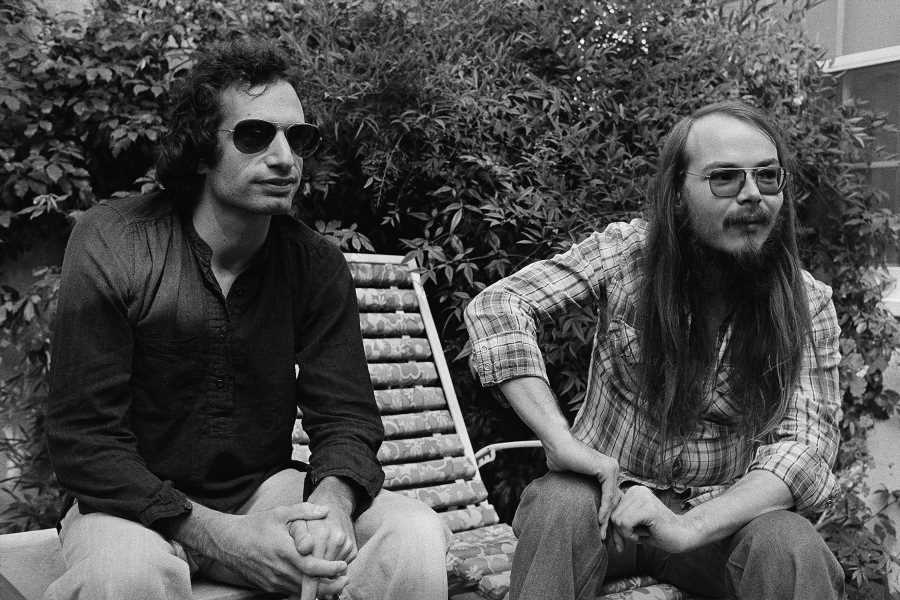 Summer’s here and time is right for dancing … on the deck of a large nautical vessel. During the late Seventies and early Eighties, the radio was dominated by silver-tongued white-dude crooners with names like Rupert and Gerry, emoting over balmy R&B beats, swaying saxes, and dishwasher-clean arrangements. Though it didn’t have a name, the genre — soft rock you could dance to — was dismissed by serious rock fans as fluffy and lame. But thanks to a web series in the mid-2000s, the style — belatedly named “yacht rock” — has since spawned a satellite-radio channel, tribute bands, and a Weezer cover of Toto’s “Africa.” Is the modern love of the music ironic or sincere? Hard to say, yet there’s no denying yacht rock is a legit sound with a vibe all its own that produced a surprising amount of enduring music perfectly at home in summer. (John Mayer even tips his own sailor’s hat to the genre on his new “Night Train Home” single, and even the aqua-blue cover of his upcoming Sob Rock album.) The resumption of the Doobie Brothers’ 50th anniversary tour, postponed last year due to COVID-19 but scheduled to restart in August, is the cherry atop the Pina colada.

Before yacht rock was an identifiable genre, Scaggs (no fan of the term, as he told Rolling Stone in 2018) set the standard for what was to come: sharp-dressed white soul, burnished ballads that evoked wine with a quiet dinner, and splashes of Me Decade decadence (the narrator of the pumped “Lido Shuffle” is setting up one more score before leaving the country). Add in the Philly Soul homage “What Can I Say,” the burbling life-on-the-streets homage “Lowdown,” and the lush sway of “Georgia,” and Silk Degrees, internationally or not, set a new high bar for Seventies smoothness.

The sophisticated high-water mark of yacht, Donald Fagen and Walter Becker’s masterpiece is the midway point between jazz and pop, with tricky tempo shifts, interlocking horn and keyboard parts, and pristine solos. Not settling for easygoing period clichés, these love songs, so to speak, are populated by a sleazy movie director (the gorgeous rush of “Peg”), a loser who still hopes to be a jazzman even if the odds are against him (the heart-tugging “Deacon Blues”), and a guy whose nodding-out girlfriend is probably a junkie (“Black Cow”). The most subversive cruise you’ll ever take.

The Doobie Brothers, Minute by Minute (1978)

The Doobies got their start as a biker-y boogie band, but they smoothed things out for Minute by Minute. Highlighted by “What a Fool Believes,” the unstoppable Michael McDonald-Kenny Loggins co-write, the LP piles on romantic turmoil, falsetto harmonies, and plenty of spongy electric piano. But it also proves how much personality and muscle the Doobies could bring to what could be a generic sound. McDonald’s husky, sensitive-guy delivery shrouds the unexpectedly bitter title song (“You will stay just to watch me, darlin’/Wilt away on lies from you”)  and honoring their biker roots, “Don’t Stop to Watch the Wheels” is about taking a lady friend for a ride on your hog.

The Dylan-goes-electric moment of yacht, “Get Closer” validated the idea that folkie singer-songwriters could put aside their guitars (and mandolin), tap into their R&B side and cross over in ways they never imagined. In addition to the surprising seductiveness of the title hit, Get Closer has plenty of yacht-rock pleasures. In “Goodbye Old Buddies,” the narrator informs his pals that he can’t hang out anymore now that he’s met “a certain young lady,” but in the next song, “Baby Blue,” another woman is told, “There’s an old friend in me/Tellin’ me I gotta be free.” A good captain follows the tide where it takes him.

Cross’ debut swept the 1981 Grammys for a reason: It’s that rare yacht-rock album that’s graceful, earnest, and utterly lacking in smarm. Songs like the politely seductive “Say You’ll Be Mine” and the forlorn “Never Be the Same” have an elegant pop classicism, and the yacht anthem “Sailing” could be called a powered-down ballad. Fueled by a McDonald cameo expertly parodied on SCTV, the propulsive “Ride Like the Wind” sneaks raw outlaw lyrics (“Lived nine lives/Gunned down ten”) into its breezy groove, perfecting the short-lived gangster-yacht subgenre.

The album that made Holmes a soft-rock star is known for “Escape (The Piña Colada Song),” which sports a made-for-karaoke chorus and a plot twist worthy of a wide-collar O. Henry. But what distinguishes the album is the Steely Dan-level musicianship and Holmes’ ambitious story songs, each sung with Manilow-esque exuberance. The title track equates a hooker and her john to co-workers at a department store, “Lunch House” ventures into afternoon-delight territory, and “Answering Machine” finds a conflicted couple trading messages but continually being cut off by those old-school devices.

The Dan’s last studio album before a lengthy hiatus doesn’t have the consistency of Aja, but Gaucho cleverly matches their most pristine, vacuum-sealed music with their most sordid and pathetic cast of characters. A seedy older guy tries to pick up younger women in “Hey Nineteen,” another loser goes in search of a ménage à trois in “Babylon Sisters,” a coke dealer delivers to a basketball star in “Glamour Profession,” and the narrator of “Time Out of Mind” just wants another heroin high. It’s the dark side of the yacht.

Imagine a Doobie Brothers album entirely comprised of McDonald songs and shorn of pesky guitar solos or Patrick Simmons rockers, and you have a sense of McDonald’s first and best post-Doobs album. If That’s What it Takes builds on the approach he nailed on “What a Fool Believes” but amps up the sullen-R&B side of Mac’s music. His brooding remake of Lieber and Stoller’s “I Keep Forgettin’” is peak McDonald and the title track approaches the propulsion of Christopher Cross’ “Ride Like the Wind.” With his sad-sack intensity, McDonald sounds like guy at a seaside resort chewing over his mistakes and regrets – with, naturally, the aid of an electric piano.

Loggins’ journey from granola folk rocker to pleasure-boat captain embodies the way rock grew more polished as the Seventies wore on. Anchored by the percolating-coffeemaker rhythms and modestly aggro delivery of “This Is It,” another McDonald collaboration, Keep the Fire sets Loggins’ feathery voice to smooth-jazz saxes and R&B beats, and Michael Jackson harmonies beef up the soul quotient in “Who’s Right, Who’s Wrong.” The secret highlight is “Will It Last,” one of the sneakiest yacht tracks ever, fading to a finish after four minutes, then revving back up with some sweet George Harrison-style slide guitar.

Earlier in the Seventies, these jokesters established themselves with novelty hits like “The Cover of ‘Rolling Stone,’’ but they soon paddled over to unabashed disco-yacht. Sometimes You Win features three of their oiliest ear worms: “Sexy Eyes,” “When You’re in Love with a Beautiful Woman” and “Better Love Next Time,” all oozing suburban pickup bars and the somewhat desperate dudes who hang out there. The album, alas, does not include “Sharing the Night Together,” recently reborn by way of its sardonic use in last year’s Breaking Bad spinoff El Camino.

As a trailblazing female singer-songwriter, Simon was already a star by the time yacht launched. Boys in the Trees features her beguiling contribution to the genre, “You Belong to Me,” a collaboration with the ubiquitous Michael McDonald. The Doobies cut it first, but Simon’s version adds an air of yearning and hushed desperation that makes it definitive. The album also packs in a yacht-soul cover of James Taylor’s “One Man Woman” and a “lullaby for a wide-eyed guy” called “Tranquillo (Melt My Heart),” all proving that men didn’t have a stranglehold on this style.

More smooth hits for your next high-seas adventure

The guitarist and Jehovah’s Witness made the leap from midlevel jazz act to crossover pop star with a windswept instrumental that conveys the yacht spirit as much as any vocal performance.

Carefree bounce from a San Francisco band with the best name ever for a soft-rock act — named, fittingly, after a chill Colorado buddy.

Rafferty brought a deep sense of lonely-walk-by-the-bay melancholy to this epic retelling of a night on the town, in which Raphael Ravenscroft’s immortal sax awakens Rafferty from his morning-after hangover.

The Aussie soft rockers delivered a slurpy valentine sung in the voice of an old man looking back on his “lifetime plan” with his wife. Innovative twist: flugelhorn solo instead of sax.

“WHENEVER I CALL YOU ‘FRIEND’ ”

After its ethereal intro, this rare genre duet grows friskier with each verse, with both Loggins and Nicks getting more audibly caught up in the groove — and the idea of “sweet love showing us a heavenly light.”

Neil Young’s sad-boy shuffle is transformed into a luscious slice of lounge pop by the late Larson. Adding an extra layer of poignancy, she was in a relationship with Young around that time.

Is it real, or is it McDonald? Actually, it’s the best Doobies knockoff — a rinky-dink (but ingratiating) distant cousin to “What a Fool Believes” that almost inspired McDonald to take legal action.

Cult rarity by the late Alaskan singer-songwriter that crams in everything you’d want in a yacht song: disco-leaning bass, smooth-jazz guitar, sax, and a lyric that lives up to its title even more than the same-titled Eagles song.

“BIGGEST PART OF ME”

Ditching the prog-classical leanings of earlier albums, this trio headed straight for the middle of the waterway with this Doobies-lite smash. Bonus points for lyrics that reference a “lazy river.”

The once unstoppable blue-eyed soul duo were never pure yacht, but the easy-rolling beats and shiny sax in this Number One hit got close. Hall adds sexual tension by never specifying exactly what he can’t go for.

The Mississippi crooner-songwriter gives a master class on how to heat up a stalled romance: Pick a brisk evening, invite a female acquaintance over, and suggest . . . lighting a fire.

Yacht’s very own novelty hit is corny but deserves props for quoting from not one but two Humphrey Bogart films (Key Largo and Casablanca).

The same year that members of Toto did session work on Michael Jackson’s Thriller, they released the Mount Kilimanjaro of late-yacht hits.

The combustible trio’s gusty contribution to the genre has choppy-water rhythms and enough nautical terminology for a sailing manual.