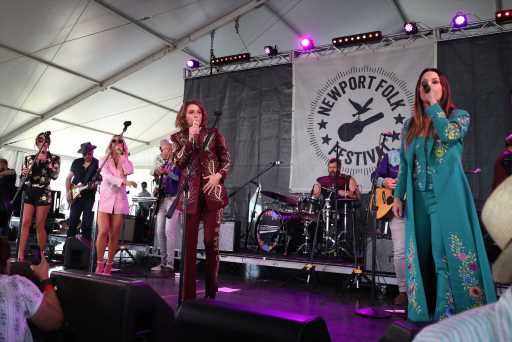 “We’re the Highwomen, sing a story still untold,” sang Brandi Carlile, Maren Morris, Amanda Shires and Natalie Hemby at their first full-concert performance as the Highwomen Friday evening at the Newport Folk Festival. The supergroup was also backed by a band that included Jason Isbell and the Hanseroth Twins during the hourlong set.

“This is our first show y’all, and we’re fucking terrified,” Carlile told the crowd early on. But the band’s debut show was rapturously received. The group traded off vocals in each other’s songs, performing their forthcoming debut album in-order before reprising their lead single “Redesigning Women” for a bonus encore performance.

Shires sang a song for her father (“Cocktail and a Song”), Carlile paid tribute to the passing generation of Highwaymen like Kris Kristofferson (“Heaven is a Honky Tonk”), Hemby offered up an ode to “all the suburban moms” (“My Only Child”), and Morris channeled Seventies Dolly Parton country stomp (“Loose Change”).

But the apex of the Highwomen’s set came halfway through when Carlile debuted a tears-in-your-beers piano ballad “If She Ever Leaves Me,” which she described as the “first gay country song.” “That’s too much cologne,” Carlile sang in the song, “she likes perfume.”

Before the song, Isbell told the story of bringing the same-sex country love song that he co-write with Shires and Chris Tompkins to Carlile for the first time. “It was kind of like taking my civil rights movie to Spike Lee,” he joked.

The set also included some special guests, including Sheryl Crow and British singer-songwriter Yola, whose debut album Walk Through Fire has been a highlight of 2019.

By the time the group finished their set with “Wheels of Laredo,” the new Carlile original that also appears on Tanya Tucker’s forthcoming album, it was clear that country music’s newest supergroup’s first time on stage had been a triumph. “We’re the Highwomen,” Carlile told the crowd as the foursome received a standing ovation, “and we’re pleased to meet ya.”