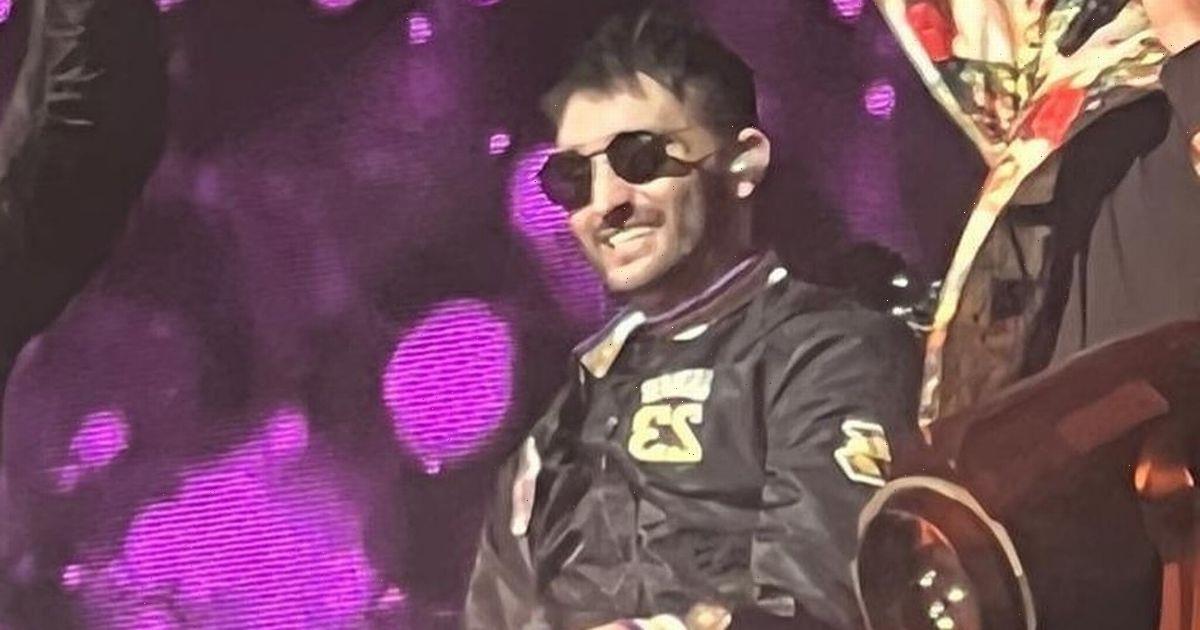 Tom Parker has been seen using a wheelchair following his return from a cancer treatment facility in Spain.

Earlier this week, the singer made an emotional return to the stage with his The Wanted bandmates at their Bournemouth gig after he was forced to pull out of several shows due to intense cancer treatment.

The dad-of-two joined Max George, Nathan Sykes, Siva Kaneswaren and Jay McGuinness, emerging from underground while sitting on a throne.

Bandmate Siva took over his lines in their hit song, Glad You Came while he sat with a pair of sunglasses on.

Now, Strictly star Max George has shared behind-the-scenes snaps with his pal, who was left sitting in a wheelchair.

The Walks Like Rihanna singer was wearing a leather jacket along with a pair of black aviator style Ray-Bans and a cream beanie hat as he offered a peace sign towards the camera.

Captioning his post, Max typed: "I mean… Come on @tomparkerofficial," alongside a heart-eye emoji.

The pair were later seen relaxing in bed as Max revealed they were having a Netflix night following a sold-out show to thousands of fans.

Despite battling his cancer, Tom has been determined to appear on stage with his bandmates on their arena tour, sending fans into meltdown as he appears on stage for their hit, Glad You Came.

After Tom's first gig, The Wanted took to social media, sharing: "Like the king that he is! The f**king legend that is @TomParker, Bournemouth, that was so special!!!!"

The group recently opened up to the Daily Star in an exclusive chat about Tom's health with Nathan saying: "It's emotional, for Tom to be able to come through his treatment, which is on­going, then get on stage in front of thousands of people was the most amazing moment for all of us."

Max added: "Tom's situation has brought us all together to be there for him, and we have a bond as friends and brothers before the band now.

"When we go out on stage we are still 'the band' – but when we come off there is a difference."

The group announced their return to the music industry last year after Tom's devastating diagnosis that he shared the news of in October 2020.

He had been diagnosed with an inoperable grade 4 tumour after suffering a seizure in July of the same year.

In November 2021, he shared that his tumour was classed as "stable", telling fans: "had the results from my latest scan…and I'm delighted to say it is STABLE."