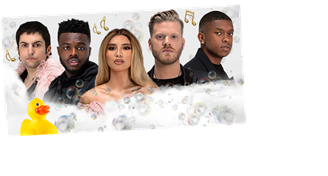 The acapella group Pentatonix is known for how flawlessly they harmonize together. So what happens when you temporarily split up this dream team, you ask? Today’s episode of Singing in the Shower is here to answer! We got Kevin Olusola, Scott Hoyin, Kirsten Maldanado, Matt Sallee, and Mitch Grassi all to join us virtually. Kevin, Kirstin, and Scott each provided footage from their respective showers (clothed, I should note) singing songs of their choice. Safe to say, this resulted in a pretty iconic setlist.

Kirstin kicked things off first with some early Adele. Her rendition of ‘Rolling in the Deep’ sounded pitch-perfect. To quote Scott, she really was “belting for the gods.” To be fair though, it was Scott’s song choice that might have taken the cake. Can we get a round of applause for that passionate ‘Best of Both Worlds’ cover, please?

We have to shout out Kevin’s swanky bathroom, which was the stuff of an interior design dreamscape. For his song choice, he whipped out a cello solo that gave some major Bridgerton soundtrack vibes. On top of that impressive instrumental work, he beatboxed! With a level of skill that doesn’t seem human?? How one can physically make those sounds we might never know.

All in all, the members of Pentatonix really know how to put on a great show. Even if it’s from the shower. Be sure to check out the group’s latest album, The Lucky Ones, on streaming platforms now!