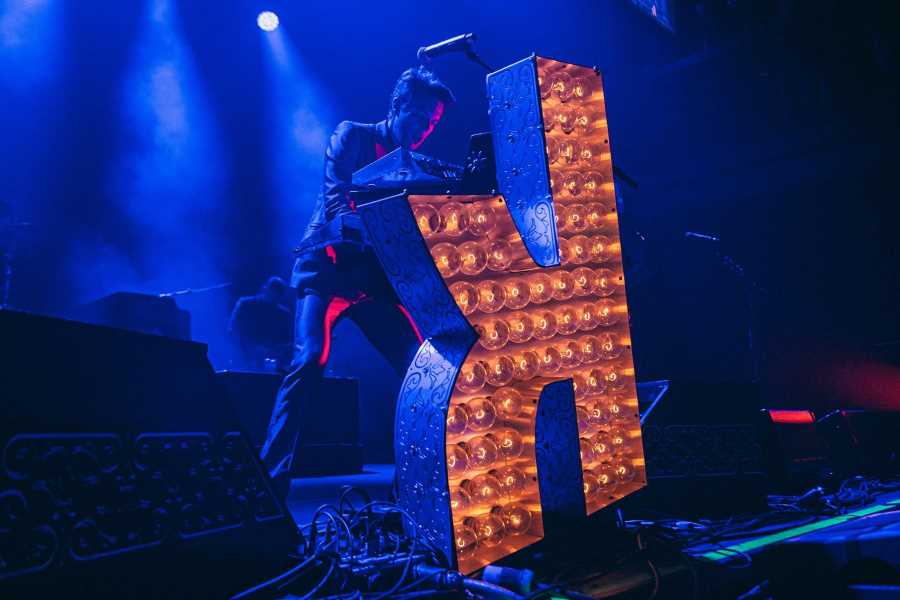 After a week that’s seen Korn frontman Jonathan Davis and Iron Maiden’s Bruce Dickinson contract Covid, and everyone from Garth Brooks and Neil Young to BTS and Nine Inch Nails cancel live events due to concerns about the virus, it briefly seemed like the Killers warmup show at New York’s Terminal 5 was in real jeopardy when a man who identified himself as the band’s doctor came onstage at the top of the night to address the crowd.

“I’ve got a bit of news for you guys,” he said. “Recently, as of this evening, the band in its entirety has tested extremely positive … for rock & roll!”

The fake-out led immediately to the band storming onto the stage and kicking off an extremely momentous Killers concert. Not only was it their first proper gig in front of a live audience since December 2019, and their first time playing songs from 2020’s Imploding the Mirage and their new LP Pressure Machine, but it also marked the return of founding guitarist Dave Keuning, who was semi-estranged from the band during the past few years and didn’t participate in their last tour or the Imploding the Mirage sessions.

“Even the greatest city in the world has not had much to celebrate these past few months,” frontman Brandon Flowers said after the group kicked off the show with “Dying Breed.” “But tonight, we are fixing to change that.”

This is a band that normally headlines enormous festivals or 20,000-seat basketball arenas, but they squeezed their standard show into the relatively tiny confines of the 3,000-capacity Terminal 5 on the far West Side of Manhattan and packed it with hardcore fans who came with both vaccine cards and negative Covid tests from the past 48 hours. Masks were encouraged, but the vast majority of the crowd shed them after just a couple of songs.

Pressure Machine arrived just a week ago, and some might have expected the album to be a major aspect of the show. But it’s a stark concept record about townspeople in Flowers’ childhood home of Nephi, Utah, who are struggling to get through each day, and lacks the sort of anthemic tunes the band likes to play live. That might explain why just two Pressure Machine songs, “In the Car Outside” and “Sleepwalker,” made the set list. But it’s a fantastic record, their best since at least Battle Born, and hopefully they’ll sprinkle more songs from it into their shows down the line.

They also played three tunes from Imploding the Mirage (“Blowback,” “Caution,” and “Dying Breed”), but the rest of the show was dedicated to classics like “Human,” “Smile Like You Mean It,” “All These Things That I’ve Done,” and “Read My Mind.” And if Keuning was rusty from years away from the concert stage, he sure didn’t show it. He hit every note, blasted off solos perched on Ronnie Vannucci Jr.’s drum riser, and gleefully sang along to many of the songs, even when he was nowhere near a vocal mic. The band was a fine live act in his absence, but they’re only truly the Killers when he’s on the stage. (Bassist Mark Stoermer has been off the road since 2016, but he continues to play on the records. Jake Blanton serves as his fill-in onstage.)

“It’s so weird that we’re coming back to the stage,” Flowers said about a third of the way through the set. “There’s been a lot of trepidation. I’ve talked about it before, but being from the West Coast of the United States, we have this crazy regard for New York City. You watch Saturday Night Live and see the news of the world, and everything is just happening here. We get really nervous when we play here, but it feels so good right now. Thank you so much for coming. It may not look it, but I get nervous.”

The main set ended with a euphoric rendition of “Mr. Brightside” where the crowd blissfully sang along to every word, once again proving that it’s become the “Don’t Stop Believin” of its era. And after a brief break, they wrapped up the show with “The Man,” “Sleepwalker,” and an epic “When You Were Young.”

Vannucci Jr. was the last one off the stage. “Thanks,” he said, “for risking your lives to see us.”

The band is in New York play the We Love NYC Homecoming concert in Central Park on Saturday. The all-star event was booked when it seemed like Covid was on its way out and was supposed to mark the return of live music, but the Delta variant had a very different plan. If current trends continue, a lot more acts are going to postpone or cancel dates in the coming weeks.

The Killers are supposed to play a handful of festivals and headlining dates in the next couple of months before heading over to Europe in the summer of 2022 and then back to North America for an arena run in August 2022. They might wind up playing every show as planned, or they might be forced to make major alterations. Whatever happens in the future, fans should be grateful that Keuning is back in the band, a new record is on shelves, and they managed to pull off at least one incredible concert.