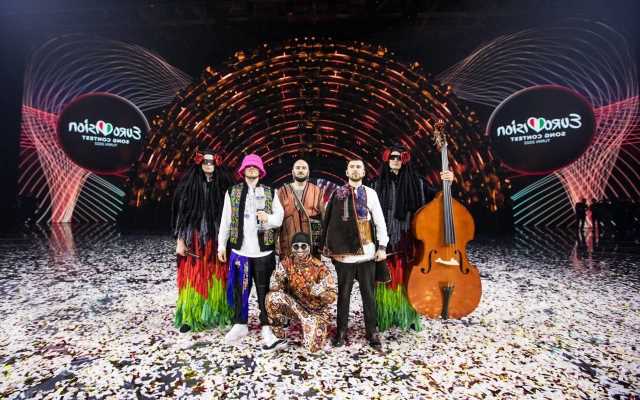 The six-man group initially failed to enter the Top 3 based on the judges’ votes, but they managed to score victory thanks to overwhelming support from viewers across Europe.

AceShowbiz –The Kalush Orchestra has such great news for their home country of Ukraine. On Sunday, May 15, it was announced that the six-man band was the winner of the 2022 Eurovision Song Contest in Turin, Italy.

The six-man group, which was formed in 2019 and also consists of Tymofii Muzychuk, Vitalii Duzhyk, Ihor Didenchuk and dancer MC Kilimmen, initially failed to enter the Top 3 based on judges’ votes. Though so, they managed to score victory thanks to overwhelming support from viewers across Europe. They got 439 fan votes, which marks the highest number of tele-vote points ever received in a Eurovision contest after 66 years.

The Kalush Orchestra won the contest after performing “Stefania”. Sung in Ukranian, the track was originally written tribute to frontman Oleh Psiuk‘s mother. However, it has transformed since into the war-ravaged nation’s anthem as lyrics take on new meaning. Oleh wrote, “I’ll always find my way home, even if all roads are destroyed.”

Following the event, Oleh thanked the Ukrainian diaspora and “everyone around the world who voted for Ukraine. … The victory is very important to Ukraine. Especially this year.” He also said he and his bandmates would return home in two days and were not sure about their future plans.

“It’s hard to say what exactly I am going to do because this is the first time I win the Eurovision Song Contest,” he explained. “But anyway like every Ukrainian we are ready to fight as much as we can and go until the end.”

The European Broadcasting Union, which organized the annnual show, declared that they will do nothing against the group for making a statement onstage. “We understand the deep feelings around Ukraine at this moment and believe the comments of the Kalush Orchestra and other artists expressing support for the Ukrainian people to be humanitarian rather than political in nature,” the EBU stated.