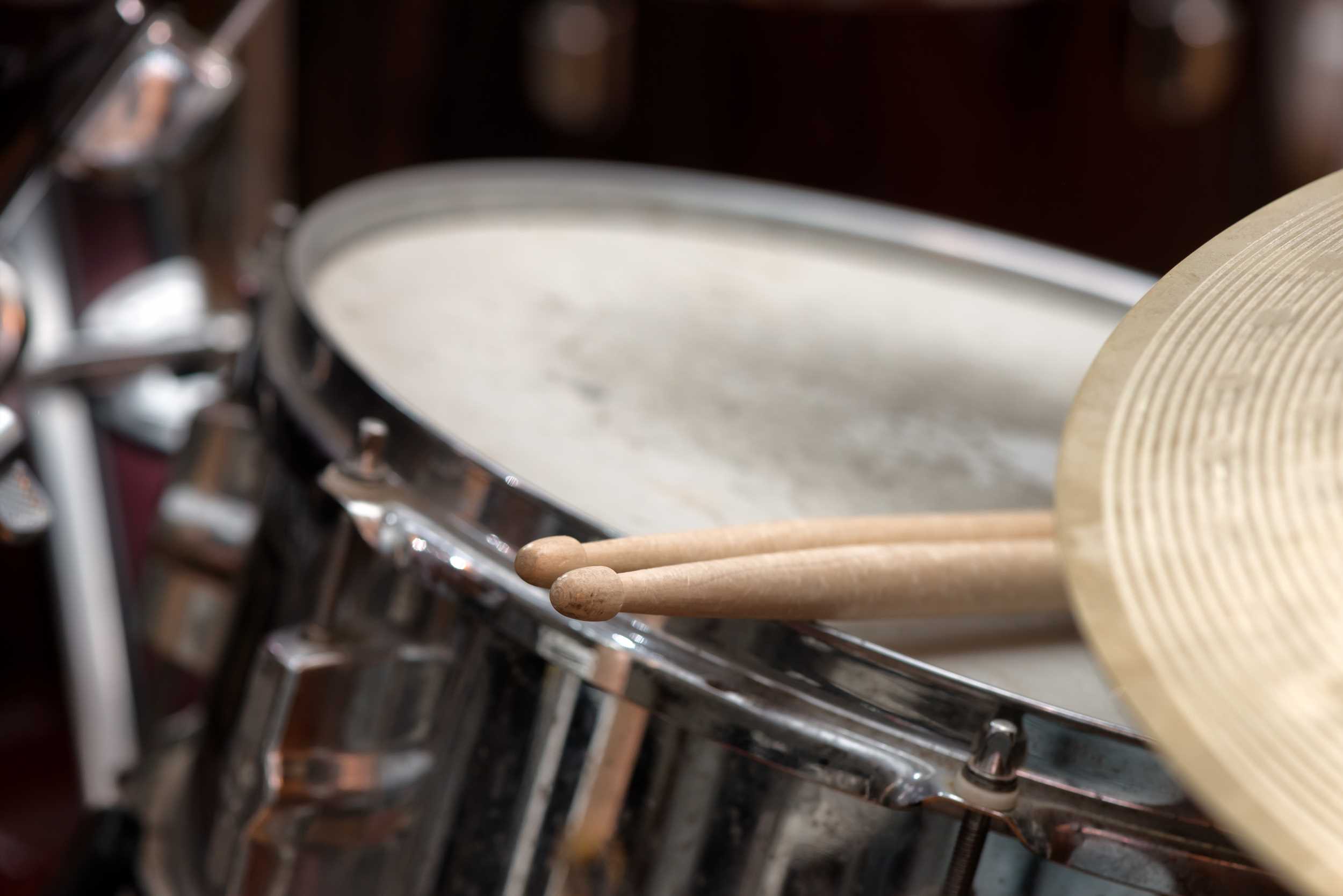 This article is a part of RS Recommends, an editorial series reviewing products in music and entertainment. Items are independently selected; Penske Media may earn a commission from purchases made from our links.

What would The Beatles be without Ringo Starr or Rush without Neil Peart? While the two are now celebrated as legendary songwriters and producers, they first won acclaim behind a drum kit, known as much for their steady flow as they were for their percussive powers (see: Rush’s “Tom Sawyer” or The Beatles’ 1966 B-side, “Rain,” for proof).

These days, everyone from Questlove to Travis Barker continue to impress on the cans, though more and more amateur musicians and enthusiasts are taking on the drums as well. Just look at the number of drum sets you see at your local high school recital, or the street performers rattling off insane drum solos in front of astonished crowds. A set of drums, it seems, isn’t just about creating music, but also about giving yourself permission to let loose and have a little fun.

That’s what Mike Sleath, believes, at least. Sleath, a Toronto-based drummer who’s been part of Shawn Mendes’ touring band since 2015, says drumming for him is about bringing people together. “My uncle is a drummer and he really showed me early on how fun it is to play music,” Sleath says. “When I first started all I had was a pair of sticks, and I would build drum sets out of pillows and boxes,” he continues. “Still, I’ve always loved the idea of using drums to work with other people and creating something together.”

While a set of boxes will hold up to light stick work, a basic drum kit these days should include a kick drum, toms, hi-hat, crash cymbal, ride cymbal and most important, a snare drum. “The snare,” Sleath explains, “is the backbeat. In genres like rock and pop it normally lands on beats two and four, and it really helps to set the tempo and feel of the song. It’s definitely the meat and potatoes of the drumset.”

From leading armies into battle to keeping a drumline in formation, snare drums have been used for centuries, as a way of keeping people in line (literally) to rattling off some excitement for a big parade or event. Before they pull a winning lottery ticket or a winning name from an envelope, you hear a drum roll from a snare drum. And some of today’s most popular songs — regardless of genre — find their groove thanks to the snappy snare.

When buying a snare drum, it’s important to consider the and the material used to make the shell. Most snare drums have shells made from either wood or metal. Generally speaking, wooden snare drums sound light and bright, while an aluminum snare, say, tends to be louder. You’ll also want to consider the width of the drum: the wider the drum, the fatter the sound. These days, 14-inch snare drums are the most common.

“Sound,” Sleath explains, “is the most important part. “When someone says a snare is out of tune it normally speaks to an uneven tension around the drums, and/or the top and bottom head aren’t nicely tensioned together. Unlike most melodic instruments though,” he continues, “there’s not necessarily a right or wrong way to tune a drum. A drum doesn’t need to be tuned to a specific note (unless the drum is acting as the melodic element) and it doesn’t need to be any specific pitch. You can tune it and dampen it in anyway you think sounds good.”

Unless you’re a professional musician though, Sleath says it’s okay sometimes to just pick up a snare drum and let it rip. “Drums are incredibly fun,” he asserts. “The struggle of trying to learn an instrument is so rewarding, but then with drums you [also] get to hit things and just be loud!”

If you’re looking for a solid beginner’s kit or something to practice on, you can’t go wrong with this set from GP Percussion. The set includes a 10 lug snare drum, a double brace stand, practice pad and drum sticks. It also includes a handy storage bag and a drum key.

The standard-sized drum measures 14-inches and comes wrapped in a handsome metal finish. The padded, nylon backpack comes with shoulder straps and a carry handle to give you multiple carrying options (note: the snare weighs 13 pounds so it’s not exactly lightweight).

CONS: Some users say the stand is a little short. 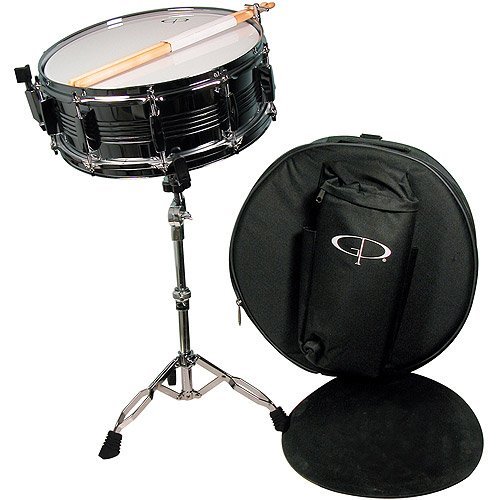 Users say this Mendini snare drum is a “big hit” (pun intended) and they’re not wrong. The 14-inch x 5.5-inch snare drum delivers crisp, clean sound no matter where your drum sticks land on the head. And they say the sound stays consistent even after years of use.

The drum weighs 16 pounds, which is heavier than some of the other models on our list, but the extra heft also makes this a sturdy set to play on. When resting on the stand, you don’t have to worry about any shifting or movement.

The included stand extends up to 30-inches, so you can choose to play while seated or standing. This set includes a rubber practice pad, sticks, storage bag and adjustable neck-strap (say, if you’re playing the drum in a marching band or drumline).

PROS: The stand is adjustable so you can play the drum seated or standing; included one-year warranty protects against any manufacturer’s defects.

CONS: A drum key is not included, so you’ll need to buy one to tune the drum head. 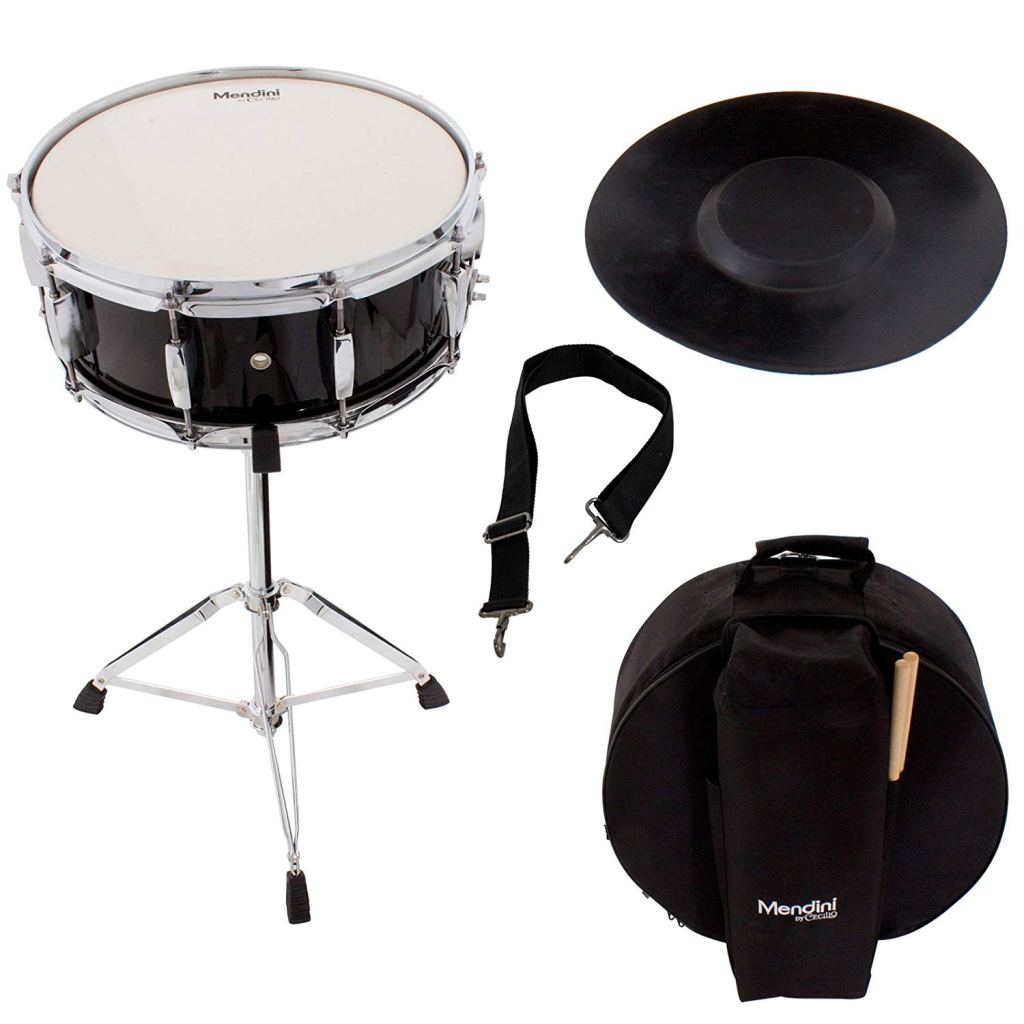 Just like any instrument, different drums produce different sounds. To really control the tone from your snare drum, you’ll want to invest in a drum head.

This highly-rated drum head gets you some extra oomph on your snare drum, with fat, full sound and little to no ringing. Drummers say the sound snaps off the snare with minimal sustain, giving off a tight and sprightly vibe reminiscent of 70s rock and roll, and drum tracks from albums by Tom Petty and ELO.

Evans says their patented UV-cured coating provides durability and consistency (the sound won’t change over time), while a thin layer of oil between two plies of film on the drum head helps to suppress unwanted overtones.

If you’re looking to turn a generic snare into a performance-worthy piece, you’ll want to pick this up. All Evans drum heads are made in the USA. Also available in black and Blue versions

PROS: Drum heads are easy to tune and switch out.

CONS: This is just the drum head. You’ll still need the rest of the drum to start playing. 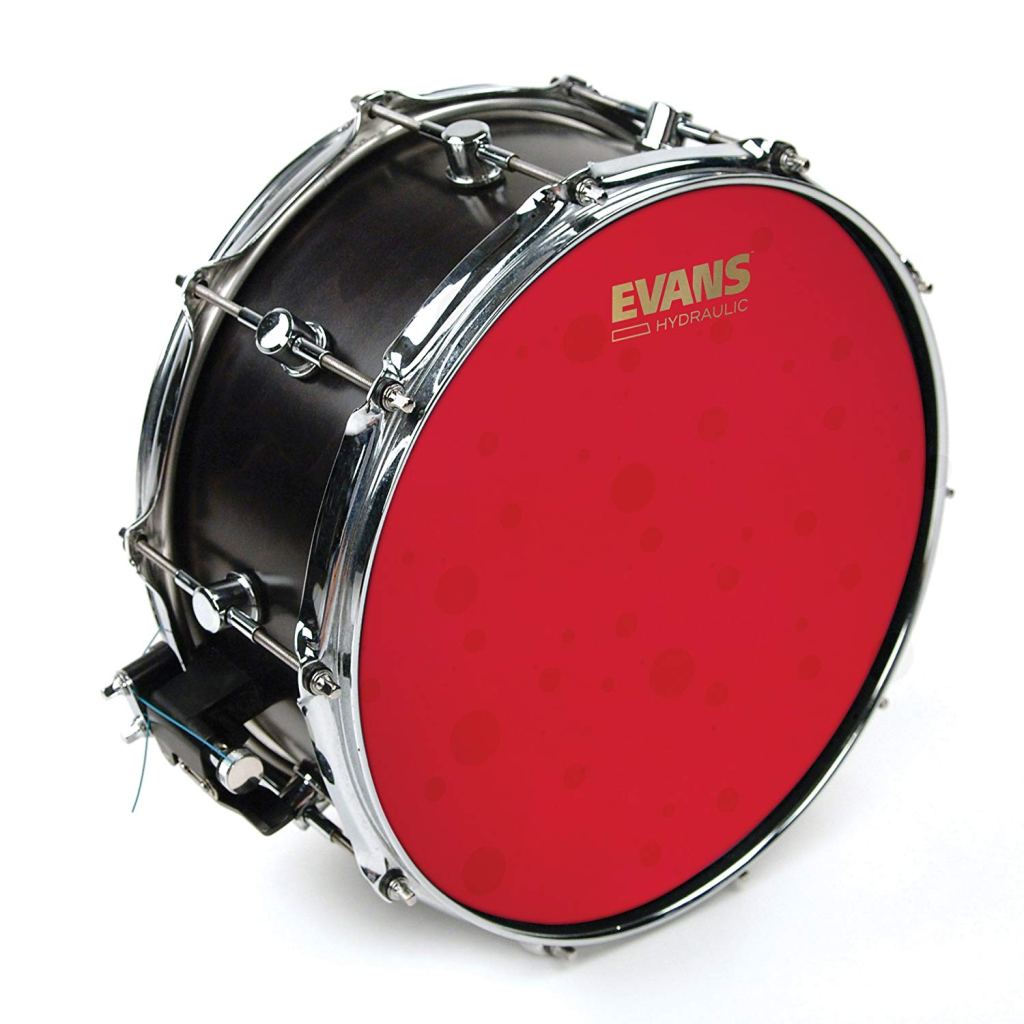