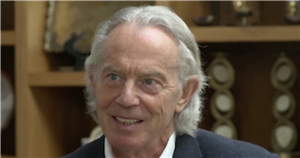 We've all suffered from lockdown hair over the past year but spare a thought for former Prime Minister Tony Blair who was mocked by Good Morning Britain host Susanna Reid when he appeared on the show.

Mr Blair was enjoying a good joke about his lockdown locks with Susanna's new co-host and his former spin doctor and chum Alastair Campbell, when Susanna compared him to "Gandalf" The Great, from Lord Of The Rings.

Alastair, opened the conversation explaining: "Tony, Mr Blair, I have worked with you for many, many years.

"We've done many events together, I've always defended you, always tried my best to look after your communications and your image.

Alastair was cut off by smiling Susanna, who suggested that Mr Blair looked more like "Gandalf".

In the remake of J.R.R Tolkien's famous novel, the elf-friendly wizard boasts long grey tresses and a lengthy white beard.

Turning to Susanna, Mr Blair said: "Well Gandalf is better than some of the things I've been called as a result of that.

Continuing to poke fun, Susanna remarked: "I'd just like to point out that interview was done after the hairdressers were open."

Blair replied: "No I know, but it took me some time to get organised."

In spite of the the big news stories last year, Blair's team of digital specialists told him that his hair had received the most traction online.

Susanna explained that her image had also been a focal point throughout her career.

The TV star added: "Because quite frankly what you look like and what your hair looks like is probably the main thing that you get traffic about.

"You grew your hair a little longer and welcome to my world.

"A little insight to how the other half live."

GMB airs weekdays at 6am on ITV.