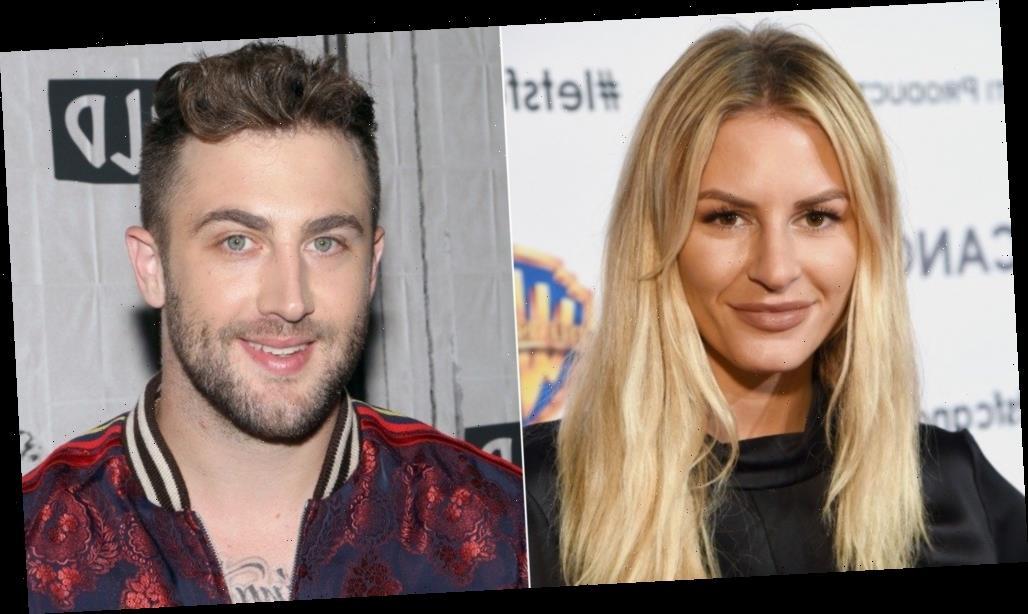 After a very high-profile split from Brendan Fitzpatrick, Rich Kids of Beverly Hills alum Morgan Stewart made headlines in July 2020 when she celebrated the Fourth of July by sporting a brand new engagement ring after a fast and furious courtship with singer Jordan McGraw.

Stewart took to Instagram to share the news of her engagement to the musician with a picture of herself wearing a strapless one piece and a rock on that finger while grinning ear to ear. The caption simply read “Fireworks.” McGraw also appeared to be floating on cloud nine as he announced the happy news via Instagram with a picture of himself and Stewart and a caption that read: “Plenty to smile about…”

But how did E! News‘ golden girl and McGraw’s paths cross in the first place? And how is her high-profile ex taking the engagement news? Keep reading to learn all of the quirky deets regarding the couple’s whirlwind romance.

As it turns out, this is not the first time Morgan Stewart and Jordan McGraw have been romantically involved. According to People, during an Instagram Live in July 2020, Stewart divulged to her fans that she and McGraw had dated a decade prior and that they gave the relationship the good ol’ college try.

Sadly, however, it didn’t work out. “We dated 10 years ago for a year and then he broke up because he was like, ‘I’m not down with you, bitch,'” Stewart revealed. “And then I was like ‘Fine, whatever, I’m over you, I don’t care.’ And then I went on obviously to have another relationship.” Ahem, the one with her estranged husband and fellow Rich Kids of Beverly Hills alum Brendan Fitzpatrick.

The reality star turned Nightly Pop host went on to say that after her very public split, McGraw pursued her until she finally gave in. “He was persistent and I was like, ‘all right.'” All right? Just all right? While she may have been hesitant to rekindle the romance initially, we’re gonna take a wild guess that Stewart had much more to say than just “all right” when she caught a glimpse of that engagement ring.

According to The Sun, it doesn’t seem like Morgan Stewart will be making her second trip down the aisle just yet since, as of this writing, she is technically still married to her estranged husband, Brendan Fitzpatrick. In July 2020, the outlet reported that both Stewart and Fitzpatrick “begged” a judge to “speed up” the impending divorce so they can both move on with their lives.

According to Los Angeles Superior Court documents obtained by The Sun, Stewart and Fitzpatrick “filed a declaration for an uncontested dissolution on June 11, 2020,” which is basically fancy legalese for “we wanna get this divorce over with ASAP.” The documents also revealed that Stewart and Fitzpatrick “entered into a written agreement regarding their property and their marriage,” and waived the right to a trial or an appeal.

The filing alone begs a huge question. Is it possible that Stewart had an inclination that her new beau, Jordan McGraw, had plans to propose? And since Fitzpatrick is also so gung-ho to wrap up the marriage is it possible that he too is already considering remarrying? Time will tell we suppose.

Jordan McGraw’s famous dad, Dr. Phil McGraw of the Dr. Phil talk show, gave both his son and Morgan Stewart his seal of approval on their engagement. And coming from the no-nonsense, clinical psychologist who is famous for doling out life advice (and tough love) on his popular daytime talk show, that should mean A LOT.

As reported by People, the psychologist turned television personality extended his well-wishes to the couple in a comment on Stewart’s Instagram post in which she announced their engagement. “Robin and I are so thrilled for you and Jordan. So proud to add you to the family! Love you both!!!,” the proud father gushed. Not to be outdone, Jordan’s mother also communicated her well-wishes as well with a string of X’s and O’s. It turns out Stewart may already be starting off on a good foot with her new in-laws, after all.

Best wishes to the happy couple! May the second time be the charm!