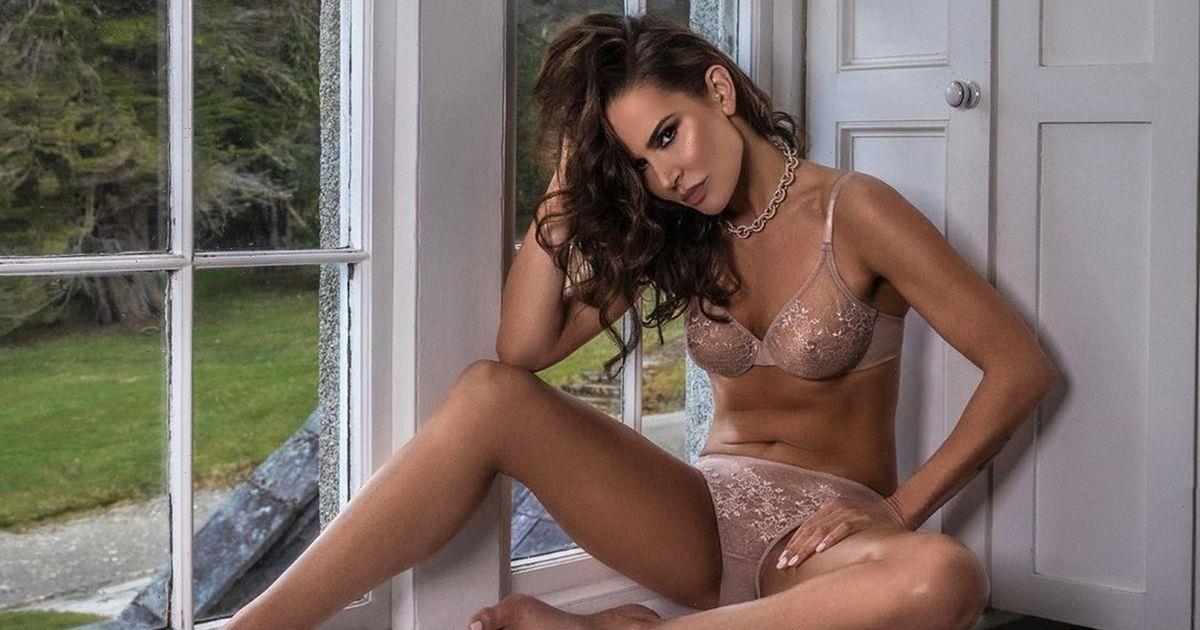 She shot to fame as the Gossard bra girl whose sexy image was on billboards across the world – but Sophie Anderton's life now could not be more different.

As one of the 'it girls' of the 1990s, Sophie was a young, beautiful socialite who drank champagne, travelled on private jets and was famous for just being famous.

She was a firm favourite with the lads' mags and her stunning figure and girl-next-door good looks made her a pin-up for many a man.

Behind the glitz and glamour, though, there was a much darker side to Sophie's life as she spiralled into a crippling addiction to drink and drugs.

Thankfully, she beat her demons and now, as she turns 45, leads a much cleaner life in the country.

Sophie hit the headlines in 1996 when she was aged just 19 and chosen by lingerie giant Gossard to be the face and body of its new Glossies range.

Lying seductively on the ground, the images shot by renowned photographer Herb Ritts showed her wearing just a bra and knickers and gazing seductively at the camera, with the cheeky strapline: "Who said a woman couldn't get pleasure from something soft?".

The naughty campaign attracted a record number of complaints to advertising watchdogs, but none were upheld.

However, just that flash of fame was enough to propel the privately-educated Bristol schoolgirl into the spotlight.

During the late 1990s she enjoyed all the trappings of fame and success her stunning looks and figure brought her – partying with the rich and famous and living a lavish fun-filled life.

But behind the smiles Sophie has since admitted she was struggling with drug and alcohol addiction – blowing £400 on cocaine a day and downing bottles of vodka.

She also had a string of failed romances with unsuitable boyfriends – including the former Aston Villa and Manchester United footballer Mark Bosnich, who also developed a serious cocaine habit.

In an interview, Sophie told of her drug-taking past, saying: “My advice to any young star is please don’t get involved with drugs – my biggest life regret was ever taking that first line of cocaine.”

She revealed how she was introduced to the drug early in her career and was told it would help keep her slim.

“I didn’t know what I was doing," she said. "Someone offered it to me and told me it would keep me skinny, so I did it."

She admits to not remembering chunks of her 20s and estimates her 15-year addiction cost her £10 million.

But after hitting rock bottom, Sophie went cold turkey and sorted out her life, getting into fitness and healthy living.

She went on to appear on various TV reality shows, including Love Island, I'm a Celebrity, Celebrity Big Brother, Simply the Best and Fear Factor.

And now, nearly three decades on, her life could not be more different. In August 2021 she married multi-millionaire oil executive, Count Kaz Balinski-Jundzill, at a lavish ceremony in Ireland.

Sophie describes he husband, who she refers to affectionately as Kaz, as her “best friend, soulmate and lifetime partner in crime”.

Kaz, 53, is the father of Charlies Angels actress, Ella Balinska, who was the ring bearer at the couple's wedding which included a reception at Kaz's family home, Glendalough House in County Wicklow, where the couple now live.

Gushing about her new husband, Sophie said recently: "Love comes into your life when you’re not looking for it I’ve waited all my life to meet the person I wanted to marry, although I've loved, I've never been in love until now.

"I never thought marriage was on the cards for me – in fact my nickname was the runaway bride – but Kaz kept telling me it would suit me, and he was right.”

Sophie is now settled in Ireland, at the huge home set in 1,400 acres of mountainsides and woodlands, and says she's living her best life.

"I absolutely adore it here – from day one I was welcomed with open arms by the most wonderful people.," she said.

“What you see here is what you get, which was a real eye-opener for me, coming from the big city and the fashion industry,”

“I have got mountains right around the corner and I go off hiking by myself for hours.

“It’s a very different lifestyle from living in the city but why would you want to stay indoors when you have such a beautiful place to go exploring.”

She also declares that she's the "healthiest and fittest" she's ever been and is still modelling, signing with an Irish model agency.