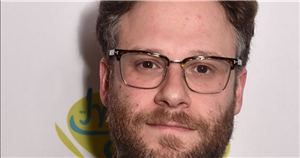 American actor and comedian Seth Rogen recently shocked his fans after he uploaded a pic on social media looking completely different for his new TV role.

Seth, 39, who is usually best known for his manly stubble, shaved it all right off and accompanied his new look with an 80s inspired mullet.

The actor is getting ready to star in Pam & Tommy, an upcoming Hulu series about Baywatch star Pamela Anderson and her husband, Mötley Crüe drummer Tommy Lee.

The drama will focus on the infamous sex tape scandal and how it was leaked to the public.

Seth will play Rand Gauthier, the man who stole the couple's sex tape. The actor will also star alongside Lily James and Sebastian Stan, who will play the famous couple.

Taking to Instagram to post photos of his colleagues and himself in character, the Bad Neighbours actor looked very unfamiliar.

In one of the snaps, Seth is rocking a pair of knee-length denim shorts, a striped blue and red top and an incredibly dodgy mullet. While another pic shows a closer look at his clean-shaven face.

Captioning the photos, the star wrote: "My co-stars @imsebastianstan and @lilyjamesofficial are a lot cooler than I am."

Some of Seth's 8.9 million followers were evidenlty shocked by what they saw and went to the comment section to share their surprise.

One astonished fan wrote: "I didn't recognise you lol."

Another penned: "The f*** am I looking at? Is that you Seth??? That's a different person I swear."

As well as promoting his new role, Seth has also been very busy endorsing his new memoir called Yearbook which was released on May 11.

On the book’s website, Seth explained: "Yearbook is a collection of true stories that I desperately hope are just funny at worst, and life-changingly amazing at best. (I understand that it's likely the former, which is a fancy 'book' way of saying 'the first one'.)

"I talk about my grandparents, doing stand-up comedy as a teenager, bar mitzvahs, and Jewish summer camp, and tell way more stories about doing drugs than my mother would like."

He continued: "I also talk about some of my adventures in Los Angeles, and surely say things about other famous people that will create a wildly awkward conversation for me at a party one day.

"I hope you enjoy the book should you buy it, and if you don't enjoy it, I'm sorry. If you ever see me on the street and explain the situation, I'll do my best to make it up to you."