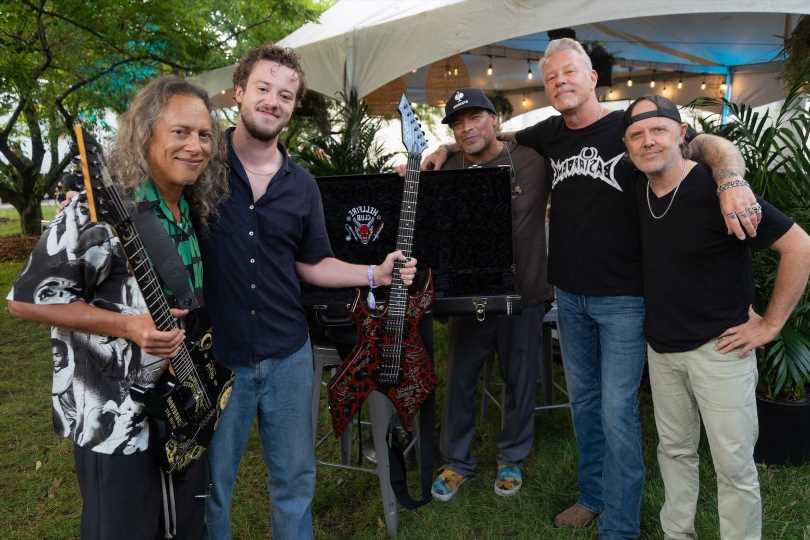 Hours before Metallica acknowledged the Stranger Things-fueled resurgence of their “Master of Puppets” during their Lollapalooza set, the metal legends hung out and jammed backstage with actor Joseph Quinn, whose character Eddie Munson is responsible for the song’s renewed popularity.

Quinn was on-site at the Chicago fest, where Netflix arranged a meet-up between Metallica and the actor. “I’m a big fan of [Stranger Things]. Have been since Season One,” James Hetfield told Quinn. “My kids and I, it’s a bonding experience for us.”

Hetfield also thanked Quinn — who spent months learning how to actually play the 1986 song on guitar — for doing the track justice. “It’s all I was listening to for two years,” Quinn told the band. “I feel very connected to you guys.”

Quinn was then invited to “jam” in the band’s tuning room prior to Metallica’s headlining set Thursday, with the actor ably holding his own along the twin-guitar assault of Hetfield and Kirk Hammett. “We’d like to make an announcement: Metallica is now a five-piece,” Lars Ulrich quipped.

Metallica Get Strange With 'Stranger Things'-Themed 'Master of Puppets' Video

Meet the Creators and Activists Leading Social Media's Next Wave

The Who's 50 Greatest Songs

Metallica then gifted Quinn a B.C. Rich guitar that resembled the one that his Eddie Munson character used to fend off demons on Stranger Things in a pivotal scene. Ulrich also gave Quinn an all-access pass that would allow him to catch Metallica at any of their shows.

“It was amazing! Opportunities to play ‘Master of Puppets’ with the most iconic metal band of all time don’t come around very often,” Quinn later told Netflix’s Tudum. “A story for the grandkids.”