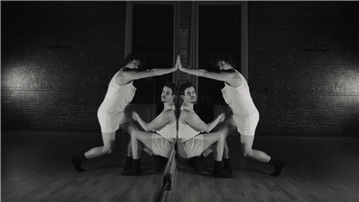 After more than a year of being homebound and Zoomed out, the cast of Broadway Bares are turning up the heat when Broadway Bares: Twerk from Home premieres online Sunday, June 20th on BroadwayCares.org. Featuring 14 all-new concept videos filmed exclusively for the event, the show will culminate with a celebratory finale shot in New York City’s Times Square.

Here, we have a special sneak peek preview of one of the cinematically shot numbers, titled “Mirror Mirror,” and choreographed by Al Blackstone (an Emmy winner for So You Think You Can Dance). The track, “I’m Due (for a Heartache),” is performed by Nick Waterhouse and features performances by Tilly Evans-Krueger, Marc Cardarelli, David Guzman, Jacob Guzman, Kourtni Lind-Watson, and MiMi Scardulla.

Broadway Bares was created in 1992 by Mitchell, then a Broadway dancer, as a way to raise awareness and money for those living with HIV/AIDS. In Broadway Bares’ first year, Mitchell and six of his friends danced on a New York City bar and raised $8,000. Since then, Broadway Bares has raised more than $21 million for Broadway Cares/Equity Fights AIDS.