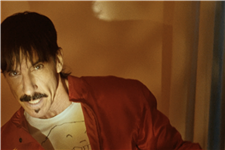 The Red Hot Chili Peppers are kicking off the release of new album Unlimited Love with a music video for “These Are the Ways,” the latest single from the record that dropped at the same time as the visual.

The action-packed video, directed by Malia James, finds frontman Anthony Kiedis leading cops on a wild chase through backyards, house parties, in and out of apartments and past paparazzi after stealing items from a convenience store.

“These are the Ways” follows lead single “Black Summer,” which was released with a music video of its own back in February, and subsequent LP singles “Poster Child” and “Not the One.” Unlimited Love is the band’s first album in six years, and it marks the return of guitarist John Frusciante, who left the band in 2009 and came back at the end of 2019, replacing Josh Klinghoffer.

Rick Rubin — who produced the band’s most influential albums including Blood Sugar Sex Magik and Californication — reunited with the Chili Peppers on Unlimited Love, too, resulting in a funk-rock sound more reminiscent of the band’s most beloved works. “More than anything, this record feels like a coming home,” Brittany Spanos wrote in Rolling Stone‘s review of the album. “There’s a certain magic that happens with these four musicians, and Frusciante’s absence always leaves a piece of the puzzle missing. Thankfully, he always finds his way back.”

Fresh off of their album release, the Chili Peppers have a busy Friday planned as they’re set to play Jimmy Kimmel Live on April 1. They’ll also play the Fonda Theatre at 8 p.m. Friday night for a massive underplay concert. With a capacity of only 1,200, the Fonda gig will be significantly more intimate than the stadium tour the band will embark on this summer.