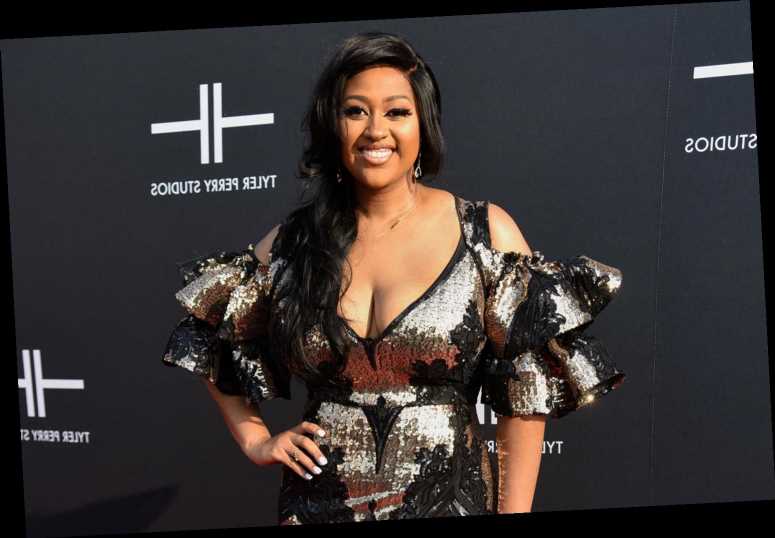 R&B singer Jazmine Sullivan is taking 2021 by storm after the release of her fourth album Heaux Tales in early January. And on Super Bowl Sunday, she'll perform the national anthem alongside country star Eric Church.

With nearly six years outside of the spotlight, she's returned with her biggest record yet featuring collaborations with the likes of Ari Lennox, H.E.R. following her background vocals on four of Frank Ocean's tracks on his 2016 visual album Endless.

Here's what you should know about the R&B queen:

On Feb. 7, Sullivan and Church will join forces to perform the national anthem at the Super Bowl.

"I'll be in Tampa Bay with @ericchurchmusic to sing the National Anthem for Super Bowl LV!" she wrote on Instagram. "Tune in on Feb 7 to the Super Bowl on @cbstv Kick-Off Show at 6 PM ET #SBLV @nfl 🏈." Their rendition of the national anthem will be the first in more than 17 years to feature two different artists. The last time two artists hit the stage was in 2003 when Aretha Franklin and Aaron Neville sang at Super Bowl XL.

Sullivan started the year with a bang, releasing her concept album Heaux Tales to the acclaim of R&B fans everywhere.

Laced with spoken words tracks from some of her friends and fellow artists — such as "Ari's Tale," "Donna's Tale" and "Rashida's Tale" — she aims to empower women to own their narratives.

"I just wanted to tell the untold stories of women. I feel like society makes it seem like we have to be perfect and present ourselves a certain way to be considered a good woman," she told NPR. "We're so very layered and multidimensional and we have stories to tell, and they're all not great stories but that's what makes us who we are."

"I know everybody on the 'tales' — they're my best friends, they're my family, they're friends of friends," she added. "I was able to place a song with the person who could delve deeper into the subject. I'm so proud of everybody that was included on this project, because it takes a lot to be honest."

She's been nominated for 12 Grammys — but has never won

Although her last album was in 2015, the singer has been up for a dozen Grammy Awards since her debut album Fearless in 2008.

At the 2009 Grammys, she was nominated for five awards, including best new artist and best R&B song for "Bust Your Windows." The following year, her track "Lions, Tigers & Bears" was up for both best R&B song and best R&B vocal performance.

Following her album Reality Show, the singer was up for two song awards for "Let It Be," while the album was up for best R&B album.

And last year, her collaboration with PJ Morton, "Built for Love" was nominated for the best traditional R&B performance category.

She went through a "really bad breakup that had gotten physical"

Sullivan is open about her past abusive relationship.

While she's currently in a relationship with a musician-writer-producer, with whom she "moved fast," she opens up about her past relationships, especially one that caused her trauma.

"To be honest, I had a moment after a really bad breakup that had gotten physical," she told NPR. "I've talked about it since it happened, but it was around the time Love Me Back, my second album, had came out. I had moved on from the situation and thought I healed from the trauma of it all, and as life went on, I realized that I didn't."

"I was still kind of acting out a lot of the hurt and pain that I had experienced. After that time, I felt a little ashamed about the things that I did and I allowed myself to do," she added. "It was not my best moment, but I had to extend myself some grace because I was really beating myself up about it."

However, today she's in a happy relationship.

"We moved fast," she told Vulture. "But we were probably just on the same page. We don't mind talking things out. We know we don't know everything, and that's where a good relationship starts. You're open to learning."

Her mother had her last day of chemotherapy in early January

Just several days after her album release celebrations, Sullivan and her family had another big day: her mother Pam went through her final day of chemo after facing inflammatory breast cancer.

"I didn't know whether to share this or not… but this is my heart! For anyone who's sent me messages asking abt how she's doing.. we're doing great!" Sullivan wrote on Instagram. "Still in the fight but not where we used to be. All cancers are a journey but I feel in my heart we're on the other side! Prayers for everybody in whatever stage you're in. Ur not alone!❤️."

"Our days were no longer filled w convos of u telling me to hurry up and finish my project, but of chemo treatments and hospital visits," she wrote on Instagram about her October 2019 diagnosis. "S— got real, Fast. But if being your daughter has taught me one thing it is how to work w something ugly, painful even, and make it a work of art. "

"So that's what We've been doing since October," she added then. "Trying to make beauty of this ugliness. And To watch u handle urself w such grace, wisdom, strength and empathy for others while ur going thru the toughest time in ur life has been the most beautiful thing I've ever witnessed."

Her last three albums are more than five years apart, because she believes in taking breaks

Following her 2010 sophomore album Love Me Back, Sullivan took a prolonged five-year break before dropping Reality Show in 2015. Now, she's relishing in the excitement following her album Heaux Tales, which she dropped in early January.

"I'm an advocate for breaks when needed. I think that sometimes you have to go into your quiet place and self-reflect, whatever it is that you need to do," she told NPR. "For me, my breaks, I never intended for them to be as long as they were — I literally thought, maybe I'll take, at the most, a year. I'm just going to chill. And then life gets in the way, and before I know it, it's two, three years, and even longer than that."