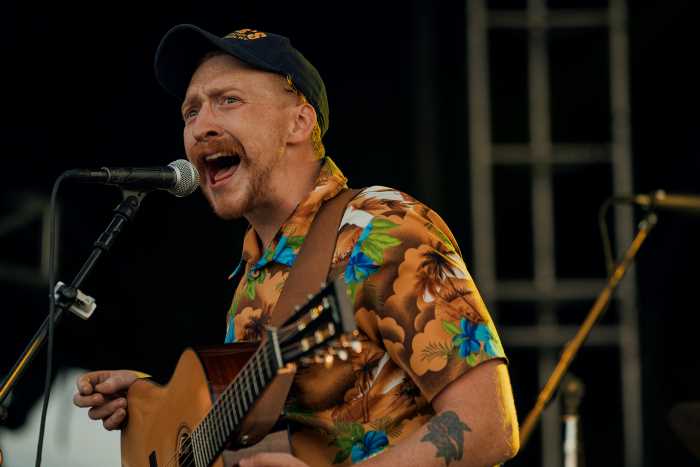 Sitting in his Ford Econoline Van on Saturday afternoon, Justin Wells wiped the sweat off his face and cranked up the air-conditioning. Just exiting the Burl stage at the inaugural Railbird festival in Lexington, Kentucky, the rising country/roots-rock singer couldn’t help but smile thinking of how wild that hometown gig just was. “Lexington is kind of the biggest small town,” Wells told Rolling Stone. “Keeneland is a pretty quintessential spot. And I’m glad that this is a lot of folks’ first view of our town.”

Home of the 2015 Breeders’ Cup, the legendary Keeneland horseracing track hosted some of the biggest names in rock and Americana over two days, from the Raconteurs to Brandi Carlile, along with several up-and-comers, from Wells and Kelsey Waldon to Billy Strings and the Wooks.

While Lexington is well-known and regarded for its bourbon, fast-racing thoroughbreds, and athletic achievements on the basketball court, the city has a music scene that has always percolated just beneath the surface. This past weekend, Railbird helped bring that to the fore. Here’s the 10 best things we saw at the fest.

Brandi Carlile
The splendor of Keeneland emerged during Carlile’s Saturday golden hour set. With the rolling hills and meadows of the Bluegrass State cradling the Limestone Stage, the Americana superstar shook the senses of the listener. She captivated with signatures like “The Joke” and “Fulton County Jane Doe,” but it was a surprising rendition of Led Zeppelin’s “Babe, I’m Gonna Leave You” that kicked the crowd into overdrive, with Carlile’s band ultimately shedding its indie-folk layers to expose its identity as a rock act. Later that evening, Carlile also joined Old Crow Medicine Show for a cover of Dolly Parton’s “Jolene.”

Futurebirds
Delivering the rowdiest set of the weekend, Futurebirds showed why they’re one of the most fascinating and captivating rock acts touring today. Layering three-part harmonies over hard rock and indie-punk melodies, the Athens, Georgia, rebels took their 45-minute Sunday set and crammed in an array of its best-known songs, including “Virginia Slims” and “Olive Garden Daydream #47.” But for each in-your-face party anthem like “Tan Lines,” there was also a tune of self-reflection, including the desperate “Rodeo”: “Goddamn, how I miss my friends, chasing empty dreams and left me helpless/‘cause no one knows me like you anymore, as long forgotten as a debt I owe.”

Mavis Staples
The gospel and soul icon washed over the multitudes on Saturday afternoon, preaching love and compassion through her nurturing voice and tone. Staples is at the top of her game, which, for her, means shining as a beacon of hope in dark times. Naturally, she closed out her performance with the Staple Singers gem “I’ll Take You There,” her own face of pure joy matching those in the crowd before her. 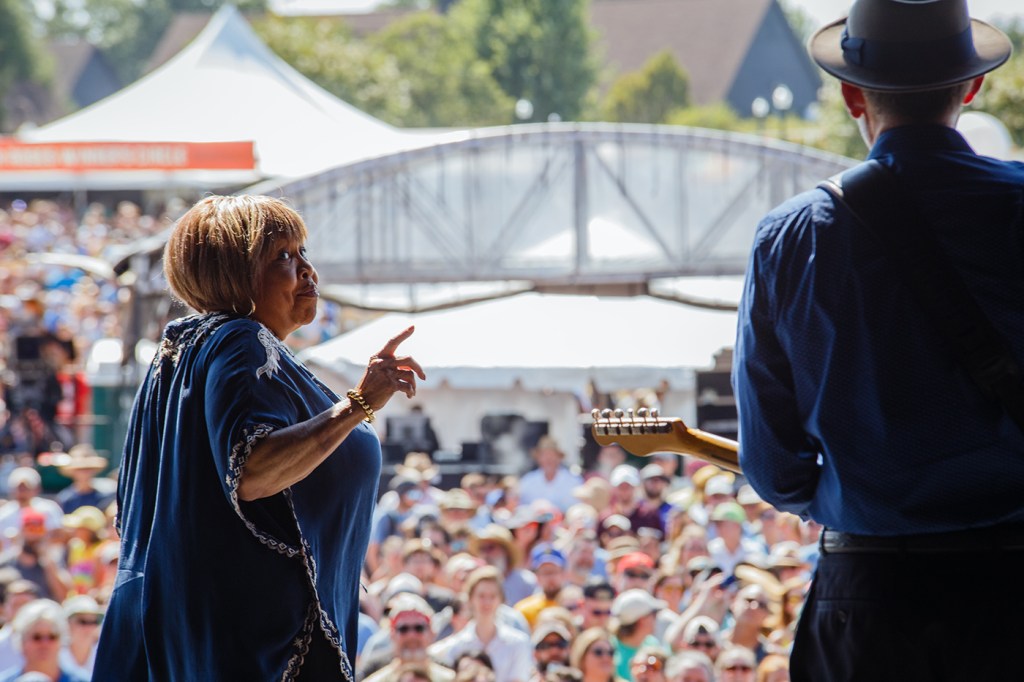 The Wooks
The Lexington-based jamgrass act played a terrific set on Sunday, but it was their late-night Saturday showcase at the Burl (the venue, not the stage) in downtown Lexington where the quintet really shined. With the large sliding barn doors of the building opened to vent the humidity of the audience, the string band ripped through fan favorite “Little Sandy Queen,” making the case that they belong on the national stage.

Justin Wells
Rising blue-collar country singer Justin Wells rumbled through a riveting set at Railbird, performing what was essentially a homecoming show for the Lexington native. Wells has a gift for melody, and for encompassing the ways and means by which so many of us try to make ends meet in his lyrics. “Keep trying they said, and soon it will all work out,” he preached in the new song “It’ll All Work Out,” “the sun is shining, the dream ain’t dying.”

Ona
The Huntington, West Virginia, indie-rock ensemble stunned the early Sunday afternoon crowd at the Burl Stage, opening with the high-octane “True Emotion,” and later jumping full-steam into “Summer Candy,” a seamless combination of alternative rock and synth-pop. Instead of easing into their show, Ona’s intent was to shake off the cobwebs of a late night. Consider it done.

Kelsey Waldon
The Nashville country vocalist has been making waves around the festival circuit in recent months, especially since signing with John Prine’s Oh Boy Records in May. A Kentucky native, Waldon is a dizzying blend of hearty downhome honky-tonk and devil-may-care folk stylings. At Railbird, she brought all of her influences to the stage, offering an early preview of her upcoming October album White Noise/White Lines.

The Raconteurs
Supporting their new album Help Me Stranger, the Nashville rockers closed out Saturday night with a snarling set of now classic tunes like “Level” and “Steady, As She Goes” and some well-received sonic experimentation. Singer-guitarist Jack White, typically the center of attention in whatever group he’s in, often fell back, purposely disappearing into the depths of the Raconteurs’ talent pool. As they prove on their first album in 11 years, they’re a group that’s truly the sum of its parts. 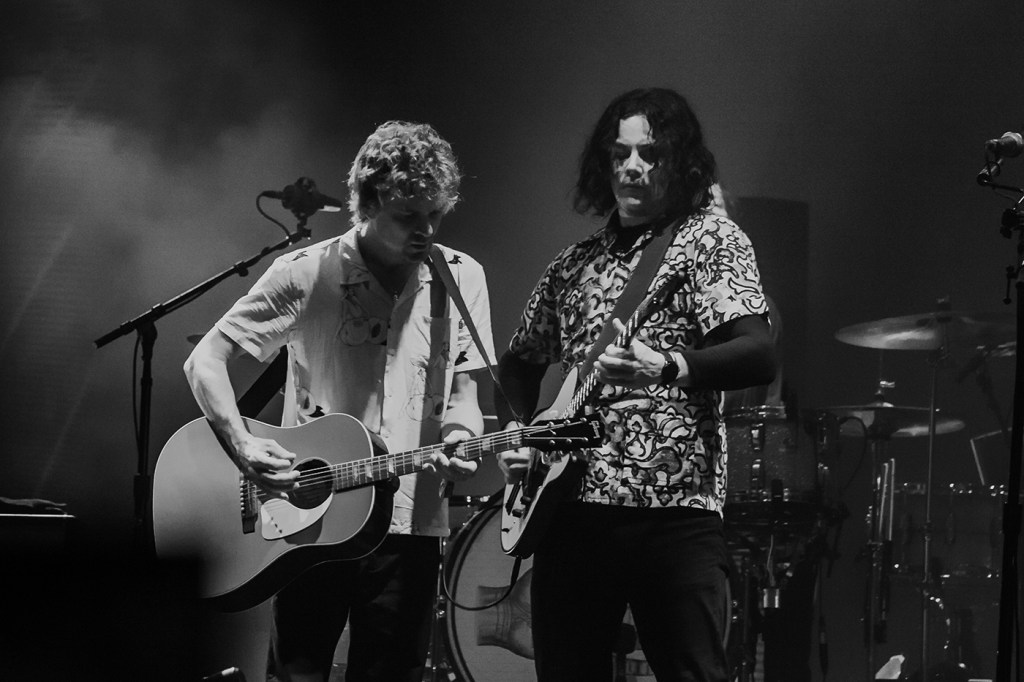 Billy Strings
Though it was an early Saturday set, the flatpicking guitar wizard all but demolished the Burl Stage with his signature explosive energy. In an ode to the hallowed grounds at Keeneland, Strings ended the show with the Stanley Brothers’ “Going to the Races.” “I’ve always kind of looked past the stars. I aim as high as I possibly can,” Strings told Rolling Stone of his whirlwind trajectory. “Then, if I get to a certain point where I’ve felt like I’ve achieved something, I aim higher.”

Tyler Childers
Holding court on the Elkhorn Stage while a hot Sunday afternoon sun faded behind the tree line, Kentucky’s own Tyler Childers earned the saying “local boy done good.” A hometown gig of sorts for the country singer-songwriter, the overflowing crowd sang along to every lyric in “Whitehouse Road” and “Charleston Girl.” And yet, as much as Railbird was a victory lap for Childers after a summer of festival headlining spots (and the new album Country Squire burning up the charts), the performance signaled the closing of one chapter and the start of the next — Childers is no longer just a Kentucky secret.