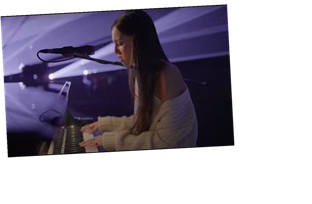 Olivia Rodrigo brought the biggest song in the country to late night Thursday, when she performed “Drivers License” on The Tonight Show Starring Jimmy Fallon.

Seated at a grand piano under a spotlight in the darkness, Rodrigo delivered an intimate performance of her debut single, which has been Number One on the RS 100 for three weeks in a row, millions of streams ahead of the competition.

Rolling Stone dubbed “Drivers License” a Song You Need to Know back in January after its release. Rodrigo, 17, is the next in a long line of musicians to come from the Disney stable, having most recently starred in High School Musical: The Musical: The Series, a Disney+ exclusive. Over the course of the show, she began writing songs for the soundtrack with her co-star Joshua Bassett.

“Drivers License” is her first non-Disney track, centering around the experience of celebrating an accomplishment (getting the titular card) without the person you wanted to share it with. Can you tell Rodrigo is a big Taylor Swift fan?