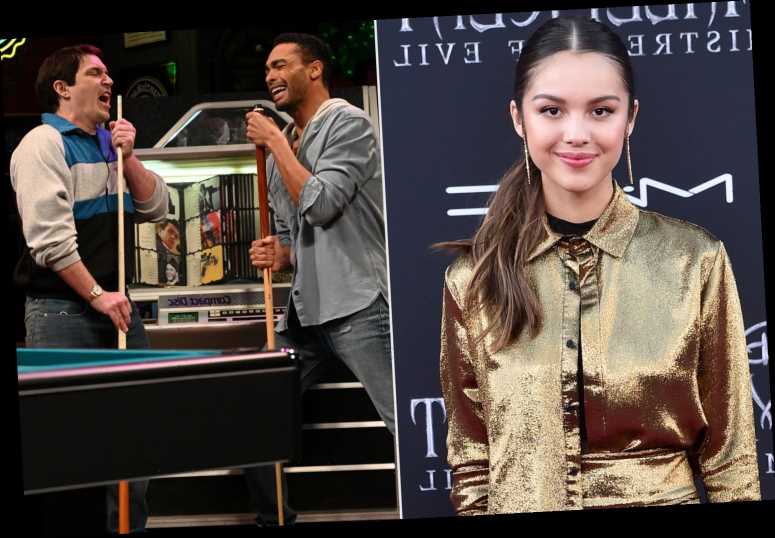 Bridgerton star Regé-Jean Page made his SNL hosting debut on Saturday and incorporated a sketch about Rodrigo's hit song "Drivers License." The singer and actress, who also celebrated her 18th birthday on Saturday, excitedly reacted to the skit on Twitter.

Later, Rodrigo shared a clip on her Instagram Story, telling fans that she was "losing her mind" over the "Drivers License" SNL sketch.

In the skit, Page plays a round of billiards with "manly men" — portrayed by SNL cast members Beck Bennett, Pete Davidson, Mikey Day, Alex Moffat, Kenan Thompson and Bowen Yang —  and heads over to the jukebox to play his favorite song.

Soon enough, "Drivers License" can be heard and all of the men slowly begin to admit their love for Rodrigo's heartbreaking ballad. "I gotta hear that freaking bridge again, man," one of the men says as they replay the climactic verse of Rodrigo's song and the entire group sings along.

Rodrigo's hit single reached No. 3 on Apple Music's chart and debuted at No. 1 on the Billboard Hot 100.

"Drivers License," which many fans think is about Rodrigo's ex-boyfriend and High School Musical: The Musical: The Series costar Joshua Bassett, broke several records for most streams in a single day on Spotify.

RELATED: Olivia Rodrigo Says She Wrote Most of 'Drivers License' While 'Literally Crying in My Living Room'

RELATED: Taylor Swift Is Olivia Rodrigo's 'Biggest Idol and Inspiration': 'I Would Love' to Work with Her

"I wrote the bulk of the song literally crying in my living room, and I think that it definitely has that feel to it," Rodrigo said. "I was driving around my neighborhood, actually listening to really sad songs and crying in the car, and I got home and I was like, 'Maybe I'll write a song about this, crying in the car.'"

"So, I just sat down at my piano and plucked out some chords that I liked and it kind of happened that way," the star added. "But it was really, really natural and organic. [It was] very much me writing in the depth of my emotion."

"The pain is definitely real in that song," Rodrigo said about "Drivers License." "I definitely think I try to approach recording all of my music from a place of emotion. I think the emotional performances are the best, even if they're not technically the best sound."