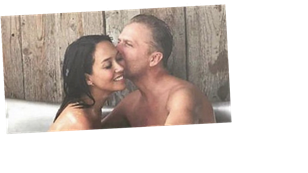 Myleene Klass and her fiancé Simon Motson have been together for over five years.

The 42-year-old Hear'Say star and PR executive Simon, 46, got engaged on the fifth anniversary of their first date.

Simon is a fashion PR guru who owns Ley Line Studio, and the hot couple announced their engagement on September 13, 2020.

Many fans know that radio presenter and mother-of-three Myleene is taking part in Dancing On Ice 2021 later this month, but what about her sizzling romance with Simon?

Daily Star is exploring the couple's scorching relationship, as Myleene has shared intimate snaps, raunchy messages and revealed she and Simon are "best mates with benefits".

The pair seem to have a steamy love life behind closed doors as the media personality shared a raunchy message from her beau in April 2020.

She posted a picture of the raunchy letter from Simon online, sharing it with her 322k followers on Instagram.

Myleene wrote on the photograph: "Every day he makes me a flask and pops a note in the lid."

Simon's handwritten note read: "My Hottie… Can't wait to… I love you… your Simon" with the x-rated parts of the letter censored using flame emojis.

Also in April 2020, Myleene dropped jaws as she posted an intimate bath selfie alongside her beau.

The picture saw the couple in a bath together as they smouldered effortlessly for the intimate picture.

Myleene captioned the sizzling snap: "My bf just posted this on his account but he's private so I'm reposting it!"

She continued to reflect on her first date with Simon as they celebrated their anniversary.

Myleene penned: "It's from this day 2 years ago. Loads of people posting 'first date challenge pics' but we don’t have a pic of that day…which is just as well as it was a blind date, I went to the wrong place and I had the early beginnings of sepsis from a bad piercing!

"We ate burgers, were the last to leave the restaurant and he got the second date booked in sharpish!

"So instead, I'm posting this pic which was taken by my bff @severineberman who happened to be walking past on her way to the bar for my pre bday drinks. Now we’re in lockdown with our miracle baby…there's no one I’d rather be staying home with, eating too many curries."

Myleene has also opened up about the sizzling side of her romance with Simon as she said they are "best friends with benefits.

During an interview with The Sun in April 2019, when Myleene was pregnant, she gushed over Simon.

"He's my best friend with benefits."

The I'm a Celebrity… Get Me Out of Here! star continued: "We're best friends who f**k! We have a very honest, very open, fun relationship. That's all I've ever wanted, but I never knew it was possible.

"I never knew to wish for him. I said to him: 'I just never knew men like you existed,' and he said he'd put that on a T-shirt."