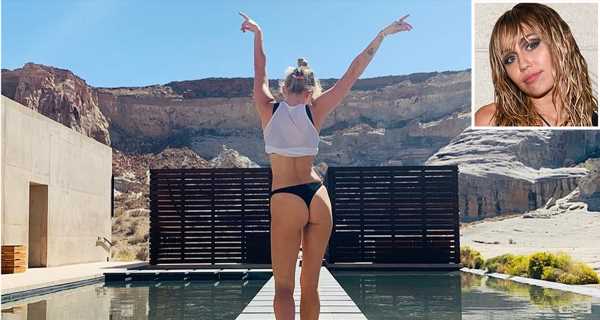 Miley Cyrus posted a cryptic caption days after news of her split from Kaitlynn Carter.

On Thursday, the singer, 26, shared a series of bikini photos to Instagram. In one post, she poses in a pool while wearing a black bikini and a cropped white tank top. A second post showed her in the same outfit, facing away from the camera with her arms raised above her head.

The musician has been on a nature-filled girls’ trip in the days since the news of her split broke. In various Instagram photos from the vacation, Cyrus could be seen posing on top of a canyon, kayaking, and hiking through red rocks.

“Necessary Mom n Sister trip,” she captioned one of the posts, tagging her mother Tish Cyrus and sister Brandi Cyrus.

The nature snaps came just days after PEOPLE exclusively learned that Cyrus and Carter, 31, had ended their relationship. The two had spent quality time together since announcing their splits from their respective husbands, and a source previously told PEOPLE they lived together in Los Angeles.

Following news of the split, Carter stepped out to support her friend, pro dancer Witney Carson, at a taping of Dancing with the Stars on Monday night.

The split news came just over a month after a rep for Cyrus confirmed exclusively to PEOPLE that she and husband Liam Hemsworth had separated after seven months of marriage. Hemsworth filed for divorce weeks later, citing irreconcilable differences. (Carter, meanwhile, announced her split from Brody Jenner in August after a year of marriage, although they never legally wed.)

Earlier this week, a source told PEOPLE that Cyrus “is looking forward to being single.”

Although Cyrus’ romantic relationship with Carter may be over, the pair are still on good terms.

“Miley and Kaitlynn broke up,” a source told PEOPLE over the weekend, adding that “they’re still friends.”

“They’ve been friends forever and were there for each other when they were both getting separated,” the insider continued, “but they’re just not in a romantic relationship anymore.”