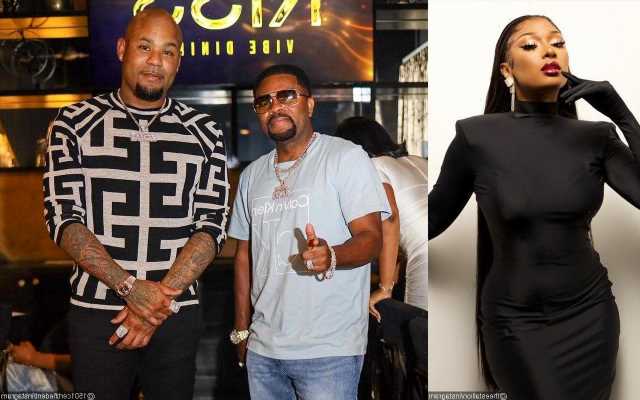 Previously, the raptress filed new court documents in which she’s asking $1 million from her label 1501 Certified Entertainment following the release of her new album ‘Traumazine’.

AceShowbiz –Megan Thee Stallion is calling out Carl Crawford and J. Prince amid their label drama. In a series of social media posts, the “Traumazine” star claimed that she was the one who actually “developed” 1501 Certified Entertainment.

The “Sweetest Pie” raptress turned to Twitter on Tuesday night, August 23 to slam “greedy” Carl and J. Prince amid their heated feud. “Im so over these grown a** men trying to take credit away from the work me and my mama put into the beginning of my career…me and my mom ‘developed’ my career I was already known for free styling and I was already working on Tina snow before I got to 1501,” she first tweeted.

“When my mama died I knew a bunch of hood n***as who just started a label for the FIRST time were not gonna be able to manage me PROPERLY so I got with roc…by this time I was a bigger artist and I asked to renegotiate… NOT LEAVE what was wrong with that ?” Megan added. “That man is GREEDY.”

The Grammy-winning artist then blasted Carl and J. Prince, noting that they didn’t even write her songs nor accompany her when she was recording her tracks. She later declared, “If you wanna be REALLL I DEVELOPED 1501.”

“One more thing bc he still going this 42 year old man said he never heard a story abt me playing as a kid where I’m from … sir I would hope 42 year old men couldn’t tell you where I was playing at as a kid,” Megan slammed Carl, who claimed that she’s not really from Houston. She continued fuming, “Now I’m just a made up character from Houston? Nobody in Houston knows me ? I just started ‘claiming Houston’ when I got famous.. like it ain’t school pictures and some more s**t out in the world.”

The feud reignited after Megan, born Megan Pete, filed new court documents, in which she’s asking for $1 million from her label. In the paperwork, the “Hot Girl Summer” femcee’s lawyers argued that her last two albums, “Something for Thee Hotties” and “Traumazine”, have fulfilled the requirements of her “unconscionable” contract.

“Over the past two (2) years, Pete and 1501 shared a long and tortured history of disputes with each other concerning Pete’s recording agreement, including the unconscionability of the agreement in its original form, as well as disputes concerning the release of Pete’s music,” so read the complaint.

Responding to the complaint was the attorney for 1501, Steven M. Zager. He told PEOPLE that “Something for Thee Hotties” cannot be classified as an album because it features “archival material and spoken word, as well as being released too soon” since Megan’s debut album, “Good News”. The lawyer also noted that her latest album “Traumazine” is being evaluated.

Then on Tuesday night, August 23, J. Prince headed to Instagram with a photo of himself standing next to Carl and accused both Megan and her management Roc Nation of being dishonest. “For years we have stood by quietly as MTS and her mgmt at Roc Nation has lied about Carl Crawford and his 1501 label,” he wrote. “The truth is that Carl discovered, developed and fully financed MTS early in her career which led to a life changing distribution agreement for her with 300 Entertainment.”

“From 1501’s earliest agreement with Megan, long before MTS was a household name, 1501 generously agreed to give Megan 40% of its PROFITS which is substantially more than the customary record royalty that a new artist receives from a record label,” so J. Prince claimed.