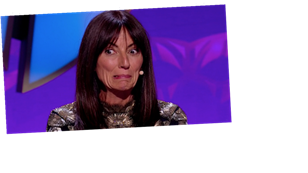 The Masked Singer UK celebrity detective Davina McCall made a major blunder on social media ahead of Saturday night's show.

Former Big Brother host Davina, 53, was forced to correct herself as she made a slip-up minutes before the latest episode of the wacky ITV guessing game aired.

She penned alongside the red-hot picture: "20 minute warning !!! Some escapism!!!"

Davina looks beautiful as ever but the problem was a photograph of the wrong dress.

She accidentally shared a snap of one of her looks from an upcoming episode, instead of the show that was airing that night.

Fans were baffled when they saw Davina wearing a very different dress on their screens.

"I posted the wrong dress," she tweeted with crying-with-laughter face emojis.

One fan penned: ""I was wondering why you were wearing a different outfit.

A third person posted: ""I was thinking ‘that’s not the dress!’ Lol x"

The TV legend went on to share a picture of herself in Saturday's glam black number.

"Oooops," said Davina in another post as she finally tweeted a picture of herself wearing the Amanda Wakeley gown.

The actress found herself in a sing-off with Sausage, whose identity is yet to be revealed, and despite impressing with her rendition of Black Velvet by Alannah Myles, the actress was voted off by the judging panel.

Jonathan Ross was the only panelist to get it right, with Davina, Rita Ora and Mo Gilligan guessing it was other female stars including Pussycat Dolls star Ashley Roberts and Frozen actress Idinia Menzel.

The 2021 series has had a bad success rate for singers so far.

Martine was the third professional performer to be booted off following Spice Girls member Mel B and pop sensation Sophie Ellis-Bextor's exits in previous weeks.

The Masked Singer UK continues on ITV on Saturday at 7pm