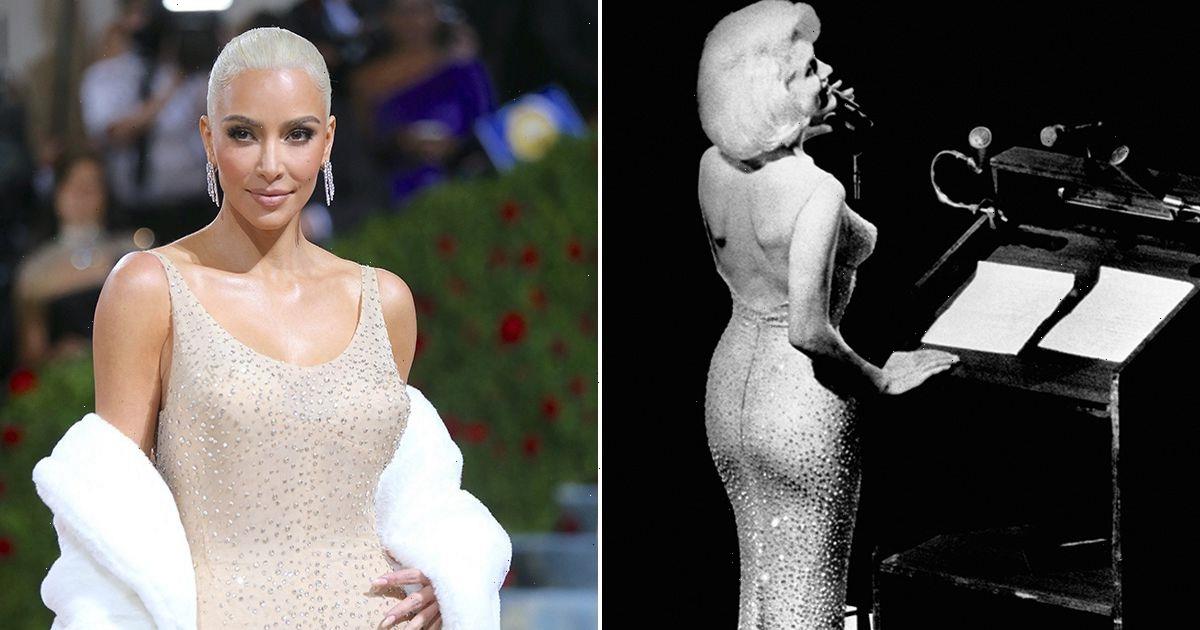 Hollywood icon Marilyn Monroe was the talk of the town after she wore her now iconic "happy birthday" dress.

The skin-tight naked gown accompanied her sultry performance of Happy Birthday Mr President to John F Kennedy – and has become synonymous with the star in the 60 years since.

But did you know the special measures that are taken to protect the dress, how much it originally cost and the story behind Kim Kardashian's famous Met Gala 2022 moment?

To mark Marilyn Monroe's birthday (June 1), Daily Star has taken a closer look at the story behind the "happy birthday" dress.

Marilyn Monroe's "happy birthday" dress is famous both for its appearance, and for the performance that it is associated with.

On May 19, 1962, the Hollywood icon arrived at Madison Square Gardens where more than 15,000 people were left in awe as she unveiled her stunning gown.

The backless "naked" Jean Louis dress was dripped in rhinestones and was so figure hugging, that Marilyn needed to be sewn into the dress for a perfect fit.

Now worth millions, it was originally designed by a then-21-year old student called Bob Mackie, who was working with designer Jean Louis at the time – with the dress originally costing £1,440.

Speaking about the dress at an auction at Juliens in Los Angeles, Bob Mackie said: "That kind of dress, the illusion of being naked, thinking you can see something but you really can’t. It was magical and it was simple. It was simple, yet so powerful.

"Marilyn was used to being naked. She didn’t care and she looked amazing. Nobody had ever seen Marilyn in person like that, it was unbelievable.

“That was the first time I had ever been involved in a dress like that. Since then I’ve done probably millions of them.”

Not only has the world been talking about the dress ever since, but her performance at the New York fundraising event has left people talking for generations.

The performance made headlines around the world, with rumours at the time speculating that she and the president had a relationship – although this has never been confirmed.

The world of entertainment was shocked and saddened when it was announced that Marilyn Monroe had died on August 4, 1962 at the age of 36 years old.

Even more shocking, was that her death came just three months after her iconic "happy birthday Mr President" performance.

On the day of her death, it is reported that she had spent time with her publicist, her housekeeper, the photographer Lawrence Schiller and her psychiatrist Ralph Greenson.

However, Marilyn's housekeeper Eunice Murray became concerned for the actress when she did not respond to knocks on her bedroom door at her Brentwood home.

The Los Angeles police department were called, but she was pronounced dead, with the city's coroner's court office stating that she had died of an overdose of barbiturates.

Marilyn Monroe's "happy birthday" dress is a part of pop culture history, and as such, has become one of the most sought after pieces of Hollywood memorabilia.

Following Marilyn's death, her personal belongings were left to her mentor and acting coach Lee Strasburg, including the now iconic dress.

However, the belongings have since been auctioned – with the dress going under the hammer in 1999, when it sold for more than £1.26million at Christies in London.

It was later auctioned again at Julien's in Los Angeles in 2016, where Ripley’s Believe It Or Not! museum paid £4.8m to buy it and put it on display in Orlando.

The dress got the world talking once more when Kim Kardashian stepped out in the famous gown at the 2022 Met Gala.

Kim Kardashian thanked Ripley's Believe It Or Not! for allowing her to wear the dress and become a part of pop culture history, sharing a photograph of herself in the gown on Instagram.

She captioned the post: "I am so honoured to be wearing the iconic dress that Marilyn Monroe wore in 1962 to sing 'Happy Birthday' to President John F Kennedy.

"It is a stunning skintight gown adorned with more than 6,000 hand-sewn crystals by costumier Jean Louis.

"Thank you Ripley's Believe It or Not! for giving me the opportunity to debut this evocative piece of fashion history for the first time since the late Marilyn Monroe wore it. I am forever grateful for this moment."

So iconic is the dress, that Ripley's Believe It Or Not! museum has specialists to look after it – including keeping the gown in a temperature controlled vault.

It was also flown to Kim Kardashian's home in California for a fitting on a private plane, accompanied by a team of security guards.

Kim Kardashian only wore the gown to the Met Gala for a few minutes due to its significance, with a Ripley's conservationist on-hand to assist her while wearing white gloves.

Speaking about the dress, Kim Kardashian told Vogue: "I'm extremely respectful to the dress and what it means to American history.

"I would never want to sit in it or eat in it or have any risk of any damage to it and I won't be wearing the kind of body makeup I usually do.

"Everything had to be specifically timed and I had to practice walking up the stairs."

Marilyn Monroe’s dress is also currently on display at Ripley’s Believe It or Not! Hollywood for a limited time, where visitors are able to get an up-close look at the stunning garment, along with a behind-the-scenes peek at Kim Kardashian's Met Gala look and other memorabilia from Marilyn Monroe and John F Kennedy.