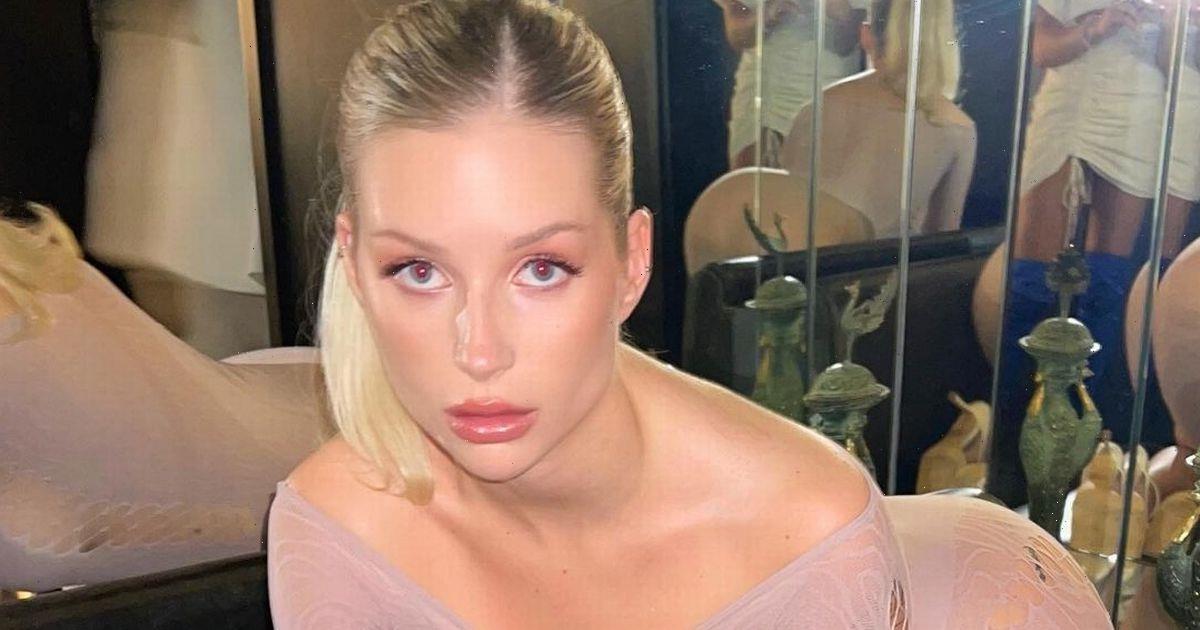 Model and OnlyFans legend Lottie Moss shared a series of pictures from an X-rated photoshoot where she wore a skintight nude sheer mini playsuit that showed off her figure and tattoos.

She captioned the four snaps with: “Ur gf text me saying she misses me” alluding to her bisexuality for her 379k followers.

The adult photoshoot took place on Thursday evening and looked like a club bathroom with mirrored walls to get the best angles of Lottie’s figure.

On her Instagram stories she was also promoting her £11.99 perfume which has already sold out on Amazon.

She wrote on a video talking about her perfume: “Go buy my perfume or ur dumped”

Scent Beauty who created the fragrance have described the scent as: ”sparkling and sensual, like the woman who wears it best. It’s a peak behind the curtains of your private boudoir, before a big night out.”

A huge keyhole in Lottie's figure hugging pale pink dress which showed off her famed cleavage to the camera.

Lottie, 23, wore her blonde hair slicked back into a tight ponytail and wore dewy makeup to make her features stand out.

She used her time glammed up and photo ready to film some fun lip-sync and dancing Tiktoks where she has 7483 followers.

The model recently revealed her latest relationship with The Vamps drummer, Tristan Evans, 26.

Rumours the two were a couple were flying in July when they were spotted together in Notting Hill.

Lottie has previously dated Made In Chelsea boys Alex Mytton in 2016 and then Sam Prince.

Sam went on to date Lottie Tomlinson, One Direction’s Louis younger sister, but the pair have now split.

In April 2018 musician Tristan got engaged to model Anastasia Smith, after dating for four years, but split soon after and removed all pictures together from their social media profiles.

Anastasia is now engaged to another man.

Last November The Vamps drummer revealed to Attitude that: ”there shouldn't be any boundaries” when discussing sexuality.

Around the same time, Lottie came out as pansexual, telling her Instagram followers: “I'm pansexual so I don't really mind… any gender. It kinda changes every day as well. It depends on who I meet.”

A pansexual person is someone attracted to or falls in love with another person ignoring their biological sex or gender identity.