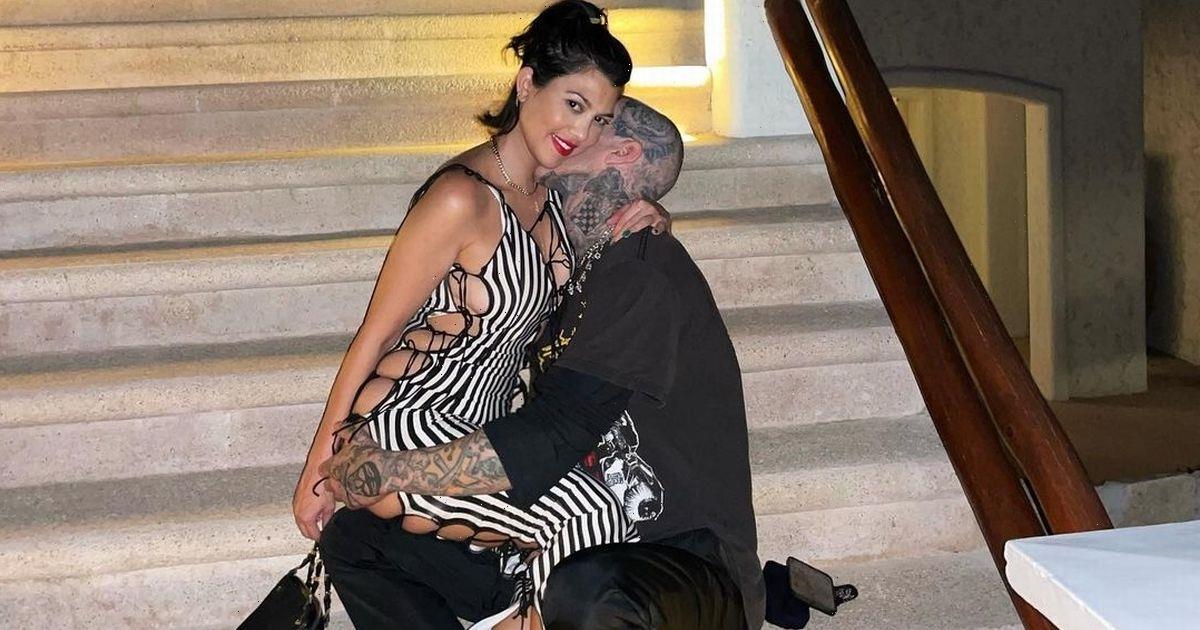 The Keeping up with the Kardashians star shared a sultry pic from their trip to Cabo San Lucas on Wednesday, with Kourtney Kardashian captioning the snap: "Yummy".

The Instagram picture shows the TV star sitting on his lap while the Blink-182 drummer nuzzles her neck. Barker, 45, responded in the comments: "True Romance".

The pair looked happier than ever as fans have been trying to keep up with the star's endless holidays.

Kourtney, 42, showed off her stunning figure in a jaw-dropping slinky black and white striped lace up maxi dress, while Travis, 45, kept it simple in all black.

Their steamy trip to Mexico was the first time drummer Travis has flown on an airplane since surviving a deadly plane crash over a decade ago. The accident in South Carolina in 2008 left him critically injured and killed four of the six people on board.

Although Barker and his pal Adam “DJ AM” Goldstein survived, they both struggled to recover emotionally and physically from the crash.

Barker, who suffered third-degree burns on 65 percent of his body, spent months in the hospital enduring 16 surgeries, while DJ AM died of a drug overdose a year later at age 36.

Travis Barker credited girlfriend Kourtney Kardashian for giving him strength to travel again. "With you anything is possible," he wrote on Instagram, to which Kourtney replied, "Anything and everything with you."

This isn’t the first time the pair have shared sexy snaps of their love affair on social media. The mother of three recently raised eyebrows after sharing a picture of Travis' blood in June, and even donned vampire teeth while flirtatiously teasing Travis that she wanted to "suck" his insides.

Kourtney and Travis were joined on the Mexico trip by Kourtney’s mum Kris Jenner and her partner Corey Gamble, with the glamorous family flying on billionaire Kylie Jenner’s private jet.

The Poosh founder recently lashed out at social media trolls who body-shamed her and assumed she was pregnant after she posted a photo of her stomach from her £6.16million six-bedroom mansion in California.

"I'm a woman with a BODY," snapped Kourtney after a fan commented: “SHE’S PREGNANT”

But her devoted fans stood by the brunette beauty, with one commenting: “She’s hot fire!”, while another said: “Love you”.

Kourtney recently filmed the final series of her hit reality show Keeping up with the Kardashians and has since been focused on her health blog and spending time with her family.