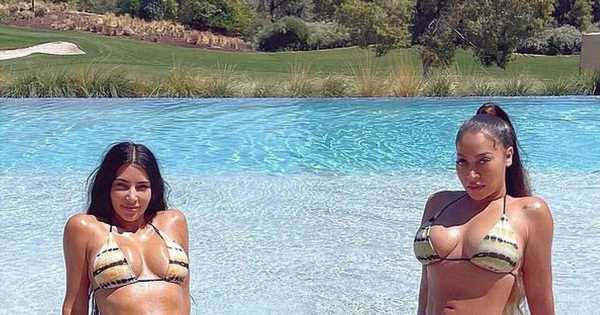 Kim Kardashian and best friend La La Anthony caused quite a stir as the duo rocked matching swimwear on a recent sun-soaked adventure.

Reality star Kim, 40, and La La, 38, proved that age is just a number as they jetted off to Kris Jenner's Palm Springs mansion for a much needed vacation.

The pair looked scorching-hot as they teamed up to deliver a red-hot display for their adoring social media fans.

There was a lot of bare flesh on display as Kim and La La coordinated their attire ensuring that their famous curves and ample cleavage took centre stage.

It seemed they were both in high spirits when it came to enjoying some girl time, with the pair taking to Instagram to share snippets from their sun-soaked escapades.

Sharing two images, Kim wrote: "Extended holiday," while La La added "We needed this," along with a sun emoji.

Kim's knickers were yanked up high onto her hips, amplifying her killer hourglass proportions and abs of steal.

In recent weeks, the SKIMs founder had spent a lot of time at her mom-manager's desert resort-style home amid her reported divorce to rap star Kanye West.

It is claimed that Kim had filed for divorce two months ago however things started to turn sour last year, after Kanye unsuccessfully ran for US president.

Concern was sparked during his campaign after a series of erratic public appearances, followed by some shocking online outbursts taking particular aim at the Kardashian clan.

In spite of the tension that had mounted, the TV star defended the Jesus Walks hitmaker, explaining that he had suffered a bipolar episode adding that he was "brilliant but complicated person".