If it’s one thing celebrities try their best to do sometimes is to keep their romantic relationships private. Unfortunately, because of social media and paparazzi, that’s difficult to do. Karrueche Tran has been dodging rumors about her and Quavo dating. But after photos surfaced of the two vacationing together in Jamaica, Tran may have to come clean.

Karrueche Tran and Quavo spotted in Jamaica for her birthday vacation

Tran and Quavo have been spotted together on multiple occasions in recent months. Along with a few other celebrity friends, the Claws star and rapper vacationed together in St. Martin a few months back. They’ve also been seen together at the same events, including a GQ Men of the Year party, as well as a screening for Netflix’s jeen-yuhs: A Kanye Trilogy. 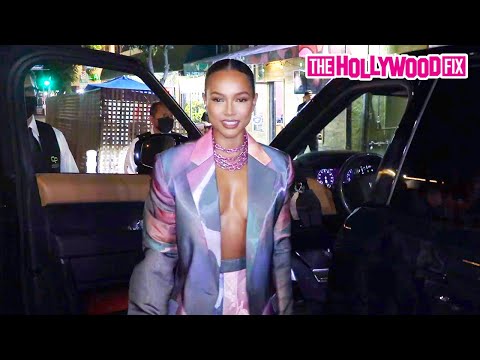 Tran has been celebrating her 34th birthday recently and Quavo has been by her side. Madame Noire reports that the two hung out at a nightclub at Tran’s glow-themed pre-birthday bash. He also joined Tran on a group trip to Jamaica. In a video circulating the internet, the Migos rapper climbs the steps toward a popular waterfall in Ocho Rios that Tran was spotted climbing.

If the pair are dating, it wouldn’t be their first attempt at a relationship. They were linked in 2017 after being spotted together a number of times following her breakup with Chris Brown. Though they never confirmed their relationship back then, the two have clearly remained in contact.

The dating rumors come months after her split from Victor Cruz

Tran previously dated Cruz for three years. There were even talks of marriage between the two, but they reportedly ended things due to their busy schedules. A source told E! News after they split: “Right now, they are focused on continuing to grow their successful careers,” the source explained. “There are no hard feelings. This is just a case of two people moving forward in life separately.”

Cruz and Tran lived on separate coasts, with Tran living in California and Cruz staying in New Jersey to be close to his young daughter. The former couple admitted that the coronavirus (COVID-19) pandemic made it difficult for them to see one another. But they said they kept in touch via Facetime and joked that they talked “20 times a day.”

While Cruz focuses on his entertainment reporting nowadays, Tran’s career has been on fire with Emmy wins and fashion and jewelry partnerships. She also told Tamron Hall that she was relishing in being single and using the breakup as a tool to refocus on work and herself, noting that she’s been in consistent relationships since she was a teenager.

She previously shot down rumors her and Quavo were an item

Despite all of the photos and videos of Tran and Quavo being a thing, she said they are just friends. A source told Entertainment Tonight that they are dating, noting, “things are casual between them, but they are seeing each other and like spending time together.” But Tran quickly shut down those rumors by issuing a short statement to The Shade Room. “No, we are not.”