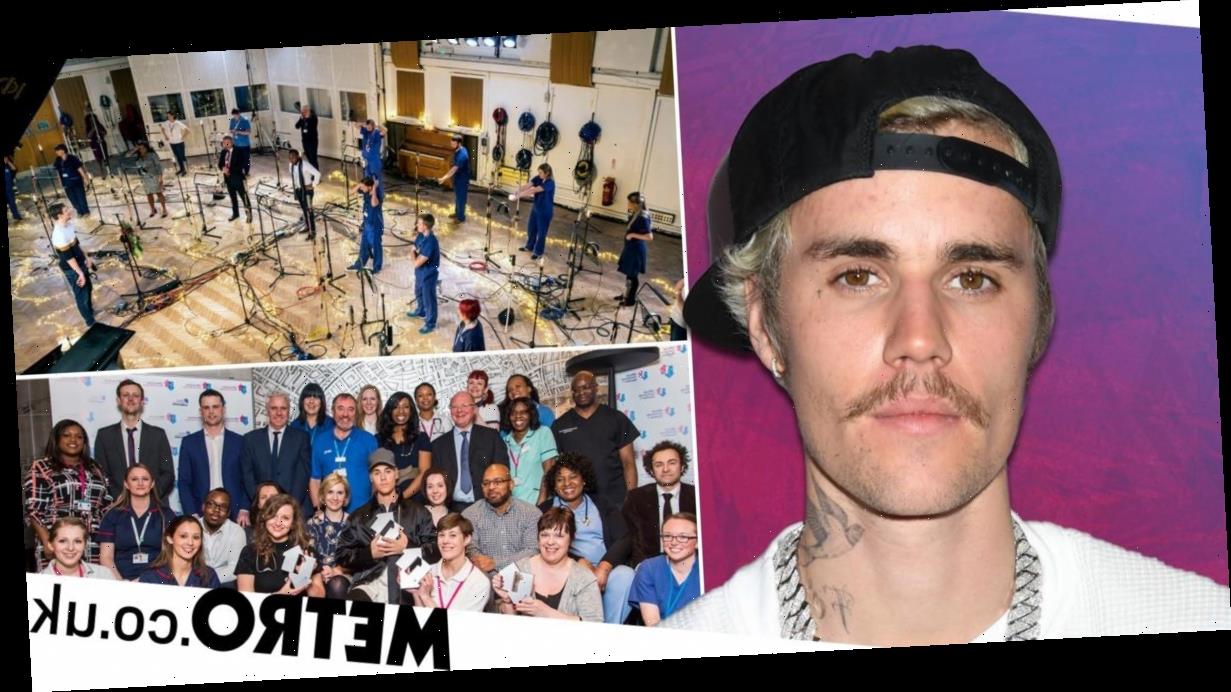 Justin Bieber was so ‘in awe’ of the NHS Choir five years ago that he’s reunited with the group again in hopes of landing a Christmas number one together with a new version of his single Holy.

In 2015, the Yummy hitmaker made the honourable move of asking his fans to download the NHS Choir’s charity single A Bridge Over You instead of his hit ballad Love Yourself, which spent a total of six weeks at number one.

It worked as the NHS Choir earned the Christmas number one that year and Justin became a hero in their eyes as much as they were to him.

To mark the anniversary five years later, Justin has this time joined forces with the choir of healthcare workers to claim the festive chart-topper as one in aid of NHS Charities Together.

Lizzie Farrant, a midwife and member of the Lewisham and Greenwich NHS Choir, told Metro.co.uk of their collaboration: ‘It’s been difficult to keep it in, I haven’t even told my family.

The cover of Holy was recorded at London’s iconic Abbey Road Studios, the famous stomping ground of a certain legendary British group.

‘We had studio two which is possibly one of the studios that The Beatles recorded in. It was amazing and it was set up so beautifully for us,’ Lizzie revealed.

Due to the coronavirus pandemic and travel restrictions, the choir didn’t get a chance to meet Justin in person this time but Lizzie was luckily able to after claiming their number one five years ago.

Sharing her first impressions of Justin, now 26, Lizzie explained: ‘I think it’s difficult to know what somebody, who is such an international star, what they’re going to be like in real life.

‘I don’t think you can judge someone from how they’re represented in the press. So we didn’t really know what it’s going to be like, it’s all very hush hush so that it didn’t get leaked beforehand. Not many of us knew what was happening.’

The nurse recalled: ‘We cloak-and-dagger went off to this posh hotel in central London and then the penny started to drop and we were escorted up to this amazing suite and he welcomed us with open arms really.

‘He expressed his gratitude to healthcare workers and was kind of in awe of it a bit.

‘We’re not professional singers, we don’t get paid for this, it’s literally a thing to keep us together and bond us together as healthcare workers and give us a break from sometimes how difficult that is, sometimes from the last year.’

‘He was fantastic, he presented us with our [number one] award and it was just a lovely experience,’ she added.

Lizzie has worked throughout the pandemic and, although she hadn’t worked as a traditional midwife for some time, was asked to return to help the overworked NHS.

‘My normal job within the hospital is a non-clinical role but then when the pandemic started to get worse it was obvious that the hospital was going to need more staff,’ she explained.

The midwife went on: ‘I was nervous about going back but I needed to make sure I did what I could…

‘Obviously it was a worry for me as well going into hospital knowing there was Covid but all the staff was just super welcoming.

‘I felt like I’d walked into a really lovely space… it actually was a really positive experience for me.’

As the chart battle gathers momentum, the NHS Choir will likely be going up against the likes of Liam Gallagher and Mariah Carey, whose classic All I Want For Christmas Is You just reached number one in the UK for the first time.

So, how would it feel if the NHS Choir were to bag their second chart-topper?

‘I can’t even tell you. I was always a bit green with envy joining the choir just two weeks after the number one,’ Lizzie said.

‘While I got to enjoy and ride the wave of number one – I got to do things like go to Glastonbury and sing at the FA Cup final and record an album – it was always a slight sore point that I wasn’t there for the number one. ‘

She added: ‘So to get the number one would be incredible but there’s some amazing competition this year and I’ve not set my expectations high. It would be the cherry on the cake for us at Lewisham and Greenwich NHS Trust after the year that we’ve had and maybe for the NHS as a wider thing.’

Holy, by Justin Bieber and Lewisham and Greenwich NHS Choir, will be released on Friday December 18.

Profits from the single will be split between NHS Charities Together and the Lewisham and Greenwich NHS Trust Charity in recognition of the extraordinary efforts of those on the medical frontline during the Coronavirus crisis.