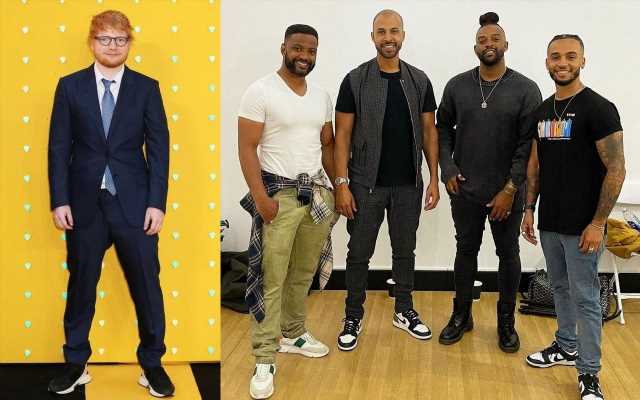 According to Oritse Williams, he had ‘goosebumps’ in the recording studio when completing the comeback tune which was penned by the ‘Shape of You’ hitmaker.

The 30-year-old pop star joined forces with the band for their comeback tune “Eternal Love”, and Marvin Humes has now revealed how he got involved with their long-awaited return.

“We first met Ed at the Queen’s Diamond Jubilee in 2012 backstage, and we’ve seen him out on the road,” he told Britain’s The Sun newspaper. “We always said we wanted to work with him. So when we got serious, we got in touch with Steve (Mac, a producer) and Ed, and asked them to do something for us.”

“When you listen to Eternal Love, there is a line that says, ‘Forever and a day,’ which is a nod to Everybody In Love, so this was specifically written for us. We were over the moon when we heard it. It is the perfect JLS record.”

Oritse Williams “had goosebumps” about recording the new tune in the studio.

“We had goosebumps. I was in the recording studio and as soon as Marv came out of the booth, I knew this song was a moment,” he added. “He was beaming from ear to ear.”

The chart-topping band – who shot to fame on “The X Factor” in 2008 – have just finished putting the finishing touches to their new record, and JB Gill has teased what fans should expect.

“It is classic JLS. We’re obviously a bit uglier and a bit older but it is JLS,” he grinned. “We have experimented as much as we can. We have the right balance and influence of old and new.”