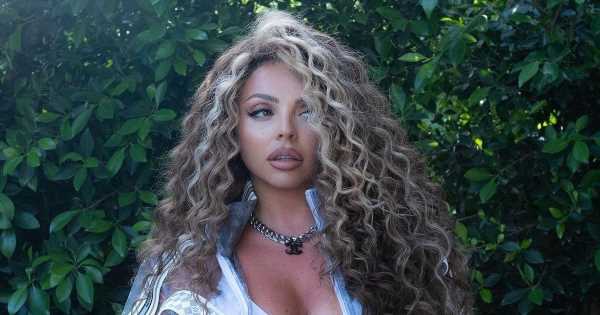 Jesy Nelson has showed off her incredible figure and toned abs while donning an array of designer accessories – including a £3,000 sheer organza jacket.

Showing off her taut stomach and ample assets, the hit-maker posed up a storm for the camera.

With her toned abs on show, Jesy left fans completely enamoured by her stunning display.

Jesy posed outside in LA, while wearing a mesh Louis Vuitton organza track top over-the-top of her ensemble – which retails at more than £3,000 on the fashion house's website.

Louise Vuitton wasn't the only designer brand that Jesy was repping, because she also showed off a chic Chanel choker around her neck with the classic CC logo front and centre.

She repped Balenciaga too, and carried a silver handbag with a chain strap – a smaller version of the bag she carried, which looks like the Hourglass, retails at just shy of £1,000.

Posting the snaps on Instagram, she penned: "A lil sun, Louis and Jazmine for the soul."

While fans in the comments section swooned over the outfit she donned.

"Jacket is crazzzy," one penned, while another said: "Oh here she is and she’s glowing!"

Other fans in the comments section started to speculate over upcoming music, with one writing: "THE CAPTION IS THE LYRICS ??????"

Another penned: "Girl where's the new music at????? WE'RE WAITING."

This comes after just one month ago the former Little Mix starlet hinted that she was "cooking" up some new music after posting a slew of snaps from inside a recording studio.

Taking to Instagram at the beginning of March, Jesy shared a set behind-the-scenes snaps.

The photos were from a studio session with two music producers, and Jesy teased her fans with the exciting news that new music might be en route.

Jesy's latest snaps comes shortly after Little Mix kicked off their first and final tour without their former bandmate.

Jesy quit the band in December 2020, with the rest of the trio announcing that they will be taking a break almost a year later, once they finish their tour.

For more of the latest showbiz and TV news from the Daily Star, make sure you sign up for one of our newsletters here.