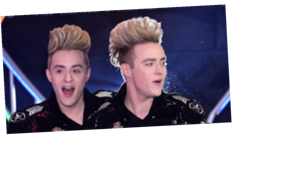 That's right you have read correctly, the dynamic Irish duo Jedward have both faced the chop and they look totally different.

The 29-year-old's, who first found fame on the X Factor have shaved off their signature quiffs and now appear unrecognisable.

With the spirit of charity at the forefront, the Irish pop stars decided to go ahead with a fresh trim in memory of their mum Susanna – who sadly lost her battle with cancer in 2019.

Wanting to provide support to others battling the disease that often causes hair loss as a result of chemotherapy, the hitmakers believed it was time for them ditch their platinum blonde locks in a bid to raise funds.

Since the loss of their beloved mother, John and Edward have helped raise a whopping 2.5 million for the Irish Cancer Society.

Speaking on camera, the pair said: "We are shaving our quiffs off to support the fighting heroes going through cancer.

"We're honouring the memory of all those who have come and gone, we are sending strength and love to all those suffering. Don't give up."

Before the grooming took place, John explained how much their epically spiked hairstyle had meant to them over the last decade.

"It's part of our identity. I don't think we'd be here today if we didn’t have the hair, but this is the first time we're going to have our hair like this since the beginning of Jedward."

As the trimmer revved up, with Edward not wasting anytime with removing his siblings tresses, John screamed in terror as his precious hair fell to the floor.

He belted: "Jaysus! Who am I? Who is this person?"

Knowing too well how brutal cancer can be, Edward remained thankful that they had supported his mum through the tough times.

He explained: "We were there when she passed and we are thankful we were able to hold her hand."

Emotionally John interjected: "'We always keep her spirit alive, like having pictures of her around and telling stories."