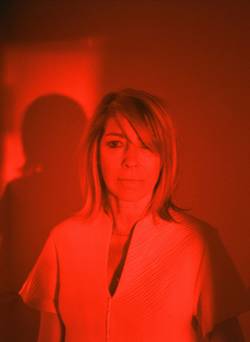 Serrated noise like twisting metal meeting an angle grinder. Warped footage of red-lit girls wrestling with electric guitars on a tiny stage. The darkened auditorium room in IMMA is the most cacophonous place in Dublin this morning.

As far as Kim Gordon is concerned, everything is in its right place.

“This one’s called A Proposal for a Dance,” she shouts, a bit bemused herself. “I actually haven’t sat in here and watched the whole thing like this. It’s making me a little seasick!”

You’d be worried if life post-Sonic Youth consisted of Gordon retreating to peace and quiet. The installation reflecting over her quiet smile is part of a specially commissioned exhibition opening at Kilmainham today entitled She Bites Her Tender Mind. This confrontational piece encapsulates the three media that consume her most – visual, performance and sonic.

With 30 years, 15 albums and reams of indelible rock immortality out of her system, Gordon is back concentrating on visual art, a first love side-tracked in 1981 when she met Sonic Youth bandmate and husband Thurston Moore in New York and got swept away in the thrillingly strident gunslinging of the “No-wave” music scene.

With Sonic Youth having disbanded in 2011 following a less than amicable divorce from Moore (and the airing of some dirty laundry), Gordon has come full circle. Body/Head, her guitar two-piece with Bill Nace, play discordant, commercially oblivious noise genetically related to Sonic Youth’s embryonic days. She is also back to circling her two overarching artistic themes – authenticity and gender.

Body/Head will perform tonight in the hospital courtyard, offering a chance for the generation who had their angst cleansed by Sonic Youth’s din to get a flavour of Gordon’s distilled vibe. For her, meanwhile, she gets to keep on performing and playing and pushing.

“It’s close to what most inspired me about the No-wave bands,” she says, now standing outside in the main exhibition space away from the bedlam. “That scene felt freer and more expressive than the visual art world in the 1980s. Music is fun to play and it’s a visceral feeling. For years, I really just wanted to keep the practices separate, but now more and more they’re merging together.” It would be nice to report that the 66-year-old’s voice is exactly that of the calm, collected, slightly bruised memoirist of her excellent and unflinching 2015 tell-all Girl in a Band, but it isn’t. Often, her voice slips below the surface as sentences fizzle out or an idea or memory jumps ship. Writing, she says, is also performance, something clear in the opening paragraphs as she eviscerates Sonic Youth’s last-ever concert on a rainy night in Brazil.

“It’s always hard for me to make a space for myself emotionally around other people,” she confides at the end of that first chapter. “Maybe for a performer, that’s what a stage becomes: a space you can fill up with what can’t be expressed or gotten anywhere else.”

Gordon may be self-effacing but give her a stage and watch the tiger emerge.

“Some of the painting is performative,” she says, examining one of her flame-edged nude paintings. “I’m drawn to that. Sometimes I take a long time to think about it. And then sometimes I just have to act more intuitively after a certain point, and ideas can just seem to come together when they’ve been there the whole time. I find that when I write, too. It’s very strange – it’s almost like its somebody else’s brain.”

“Airbnb Art”, that strange commodified brand of wall adornment that is sold in Swedish flat-pack outlets, is something Gordon is “obsessed with”, she chuckles scandalously. With this as a jumping-off point, much of the work in She Bites Her Tender Mind asks what the outcome would look like if feminist art was used instead. Authenticity and gender.

“I’m always interested in that relationship between art and design and how they feed off each other. Design and advertising is getting more and more sophisticated in how it adapts to art. You take a giant painting from a really well-respected painter and put it in the lobby of a new luxury condo building in Chelsea or something. Suddenly it looks like decoration. It’s very hard to separate art and context.”

Gordon was born in Upstate New York but raised in Los Angeles, the shy daughter of a sociology professor and seamstress mother couldn’t wait to join the artistic ­caravan to New York City and its axis of western creativity. Music – everything from the Velvets to Philip Glass – was a key love, but modern dance figureheads such as Martha Graham and Yvonne Rainer made her see that there was punk and minimalism, but there was also the politics and power of the body.

“Some of my work is about the traces of the body without seeing it in anthropomorphic terms,” she explains, pointing to sets of paint-spattered jean skirts waiting to be hung. “This show was inspired by discovering Sappho recently through my daughter Coco and realising how modern those fragments of her poetry were. I wanted to see how these paintings could work as a celebration of the female body, but then also seeing how the word ’empowered’ has become this branding word. It makes feminism sound more palatable, the idea of a strong woman.”

“Yeah, in a way,” she nods. “It’s difficult because the grey areas of feminist critique have been forgotten in the black-and-white atmosphere of #MeToo. Everything seems to be reaching for a voice so subtleties get lost. The corporate machine has totally hopped on to feminism. It started with the Spice Girls in a way co-opting the term ‘girl power’ and all that bullshit. You almost have to live a whole life to figure out what feminism is or what it isn’t. It’s really just about equal rights and equal pay. Let’s get that straight and then the other stuff will come.”

She chooses her words carefully. “There is definitely something in DNA that makes little boys want to play with trucks and throw rocks, something inherently male. And for women, it’s hard to escape that almost pathological desire to please. Madonna kind of began that trend of sexualising oneself instead of waiting for someone else to do it, but it always amounts to the same thing – you’re using sex to sell records or whatever. There’s nothing wrong with it per se, it just became an ‘interesting’ moment in feminism when people started using that word ’empowerment’.”

As a self-professed tomboy, Gordon grew up looking at men playing on stages and came to wonder not only about her own hero worship, but also the bromantic dynamic at the heart of so many bands. Her father’s study had books on the shelves with titles such as Men and their Work, and Gordon’s logical thought was to ask where the women’s edition was. What’s good for the goose, and all that.

“I don’t know why I’m so interested,” she says. “I suppose it’s because it’s such a big part of the culture. My friend [New York artist and intellectual] Dan Graham was writing these articles about rock and feminism and some women found them offensive! Just to be obstinate, I said I’d write about men in rock.”

The result was ‘Trash Drugs and Male Bonding’, an essay written just before the birth of Sonic Youth for art journal Real Life that observed the mutual climaxing of a roiling No-wave live act. “There’s something homoerotic about men in bands playing music, just as there is with men playing sports and spanking each other on the butt. I feel like rock ‘n’ roll is an arena where men are allowed to be more emotional.”

As the conversation illustrates itself with talk of Lennon and McCartney, Morrissey and Marr, and other infamously hot-and-bothered songwriting dualities, Gordon is getting into the subject.

“I definitely have a different view of men now in the sense that I don’t just see white male culture as oppressive, at least in America. I think it’s lost, like it was after the 1950s when the John Wayne mentality of men running up on horses to save women was replaced by them being consumers just like women – so what’s their role now? I always loved Mad Men because that’s what that show was about. One of the precepts of early feminism is that men have to be liberated too or else this doesn’t work.”

Don’t look to rock ‘n’ roll to solve the crisis in masculinity, she laughs, because it “can’t do shit” (“It used to be the music of rebellion. Now it’s just comfort food”). Art as a form of therapy? Not a chance, she cackles (“It’s horrible, making art! It’s like a chess game that doesn’t end!”) But there is for Gordon the consolations of her years, how home is now wherever her daughter is, and how she has learned to love the natural splendour of the LA hills where her younger self saw only the dead-eyed consumerist “sprawl” she railed against on Daydream Nation. New York is now that ghoul.

“I lived in Northampton [Massachusetts]for 17 years [up until the divorce] which was quite a commute to New York, but it was a very beautiful place. I realised I missed a lot of that nature, and have come to think of LA as a place that has that now,” Gordon says, her eyes drifting happily into nostalgia. “The ocean and those certain smells that sort of haunt you. The Santa Ana winds which are so destructive.”

‘She Bites Her Tender Mind’ runs until Nov 10 at IMMA, Dublin. An Evening with Kim Gordon takes place tonight at 7pm in the IMMA Courtyard. Gordon will also be in conversation with Sinéad Gleeson at 1pm today at Light House Cinema. www.imma.ie

Harry and Meghan worried about being eased out of Royal picture, author claims