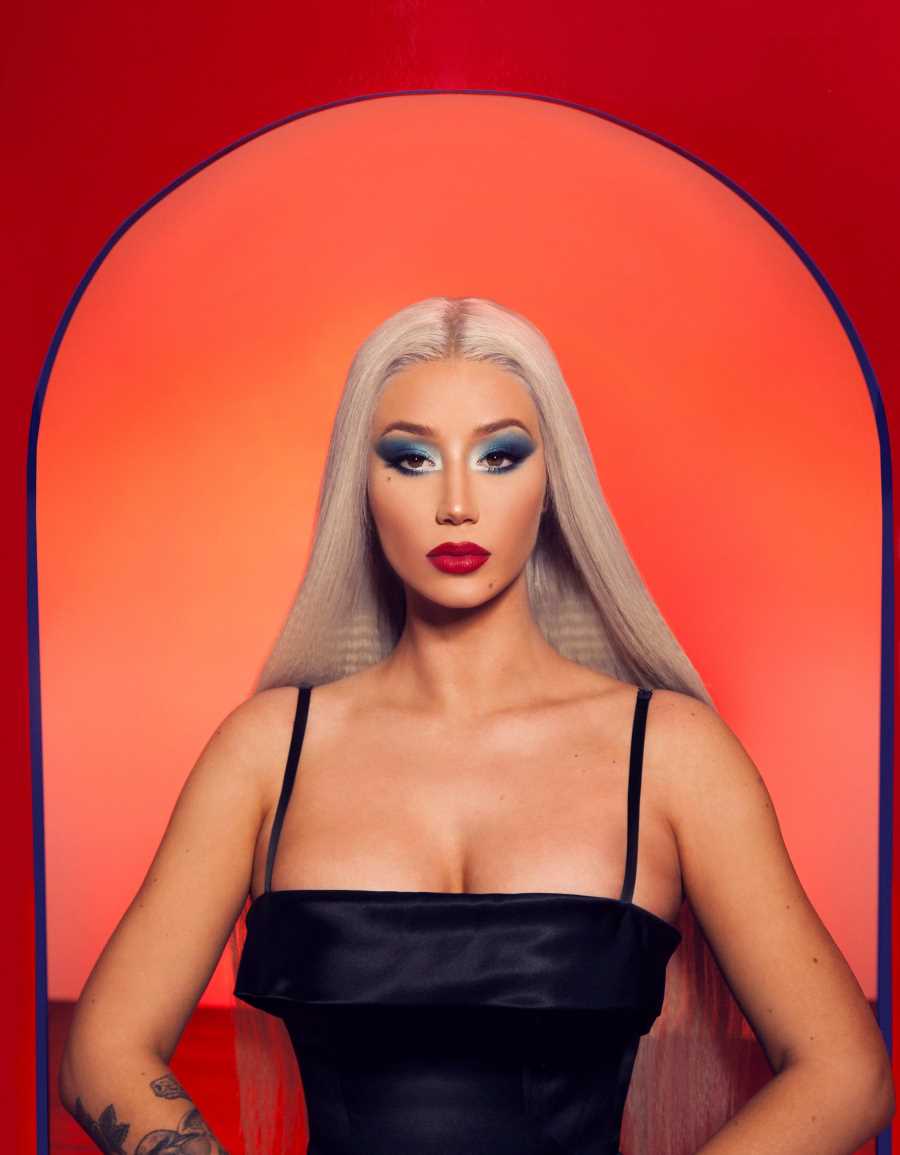 Iggy Azalea is well aware of the things you’ve said about her.

The controversial Australian rapper, who’s garnered a loyal fanbase amid accusations of everything from cultural appropriation to feuding with cartoon swine since rising to superstardom with her 2014 smash “Fancy,” has heard it all. But that doesn’t mean she’s listening (or course-correcting to appease those who’ve long lambasted her place in the rap world).

Instead, on In My Defense (out now), her first album on her independent record label Bad Dreams, she’s flipping her hair, digging in her heels, and engaging with specific charges head-on. “‘Cause I talk like this and my ass fat/They be saying Iggy tryna act black/Hatin’ broke hoes get laughed at/All they do is cap like snapbacks” and “They call me racist/Only thing I like is green and blue faces,” she says on the bass-heavy standout “Clap Back.”

It’s a bold approach, especially for someone whose relationship with the public has, in the five-year gap between In My Defense and her rise to the top of the charts with The New Classic, largely seen her in damage control mode. But, as Azalea tells EW, if she’s learned anything in the process, it’s that her frustrations are best expressed when channeled into music.

“I’m defending myself all the time, but I think a lot of people feel that way on the internet, or as women in entertainment. We all feel like we’re on trial — for everything! I don’t think, in my experience, people listen to what you have to say with open ears when you’re defending your character,” she says, seemingly referencing prior admissions that she’s influenced by American rap culture versus appropriating it, and that the art form has been her passion since the age of 14 — both of which her detractors (mostly) didn’t buy. “I’ve made a point to not talk too much [recently] about my defense of certain things, so I’ve put it all in this album.”

Ahead, Azalea discusses her approach to the new record, responding to criticism, working with her former rival Azealia Banks, and her love of RuPaul’s Drag Race.

ENTERTAINMENT WEEKLY: I hear you’re gearing up for an emergency duet with Peppa Pig to add to this album.
IGGY AZALEA: Her album is out the same day as mine! The New Classic had to compete with the Frozen soundtrack [on the charts], and I lost. Why am I always cursed with soundtracks? It’s funny, actually, but it’s like, Peppa Pig is going to outsell me.

Sonically, everything here sounds more in line with the hardness of your earlier work, whereas The New Classic felt more pop-influenced. Why did you go back to those sounds?
Before [The New Classic], which was pop-experimental, I experimented on my mixtapes with different sounds. I sampled Dave Matthews Band, and I did super EDM stuff with Steve Aoki…. I experimented with all the sounds that I like, and my favorite music is what I’m making now, on this album. I like aggressive stuff. It’s more me and reflects where I’m at in life. I’m at my strongest rapping…. I wanted a record that showcased my strengths. This is where I feel the most confident and at ease.

You’re releasing this record on your own label. Has having more control changed your approach?
It’s 100 percent on my own terms. Empire distributes my project, and I utilize them when it comes to their industry expertise, because I’m still learning about being on the opposite side of the desk. I’m so used to being in the artist’s shoes…. My last album was right before the streaming era exploded, so it’s a completely different landscape. There’s so much I don’t understand about marketing, but I’m having fun figuring out my own way of doing things on digital platforms. I’m enjoying it. It reminds me of the way I felt when I was making mixtapes. It’s my own choice of how I do s—, and s— always a little bit bootleg with me, but I love that. Sometimes things are a little bit last minute or pieced together, and it’s rough around the edges compared to a major label release, but it makes it feel more authentic.

Part of that journey, too, was rerouting after your album Digital Distortion was shelved. Was it painful to push that project off your plate?
Surprisingly, it wasn’t. I had bigger things to worry about. I was going through a lot of behind-the-screens things in my business structure. There were people I didn’t trust or who didn’t have my best interests in mind in multiple parts of my career. I felt like I was firing and hiring an entirely new team, and even that was rocky because the [next] person I hired only managed me for six months before abruptly passing away. I went through a period of two years trying to piece together a team. These changes sound really boring, but for an artist, that’s humungous. My [team] was in shambles for years. I was trying to build a foundation, and was more worried about that than having to scrap that project. Even if I had that project ready to go, I had no team behind it to push it out. At that point, it was irrelevant within my life.

I imagine that taints your emotional association with the music, too.
[That’s why] I love this album more! I started fresh and new with completely new management and me being in control of my label…. I moved to a new city, Atlanta, so it was also a change of scenery, and I was in different studios from what I’m used to. I was out of my element, but back in that nostalgic feeling of when first started out, loving music. It put me in the best place and I’m happy everything happened the way it did. I feel empowered in my business. I’m the boss of my own business. I’m about to be in my 30s, and I should be in control of my business and have ownership of my art. Even though I was f—ing dragged through the mud [by record labels] in order to get to that position.

With that control, I love that you’ve incorporated queer artists — particularly RuPaul’s Drag Race girls — into this album cycle, like casting Vanessa Vanjie Mateo, Mayhem Miller, Shea Coulée, and Trixie Mattel in the “Sally Walker” and “Started” music videos. Why do you feel a connection to them?
They’re larger than life in every way. Visually, the way they’re staged, their costuming, their wigs, there’s no such thing as too much in drag. I’ve been friends with [season 3 winner] Raja, who was my makeup artist for many years. There are a lot of people in the drag community I’ve always been friends with, but I’ve never found a way to incorporate them…. I really don’t give a f— if it makes sense in terms of packaging. Those are things you think about when you’re with a major label. I don’t care about catering to a certain demographic. I don’t know that there’s a specific person I’m making music for anymore, it’s more about myself, who I like, who I think is cool, and what influences me. We should incorporate queer artists more, period. Drag is art, and they’re real artists. Twice as good as the pop girls out here!

When are we getting you as a Drag Race guest judge?
I love Ru, his team, and the producers. I’m hoping we’ll figure it out. It’s a goal! I hope people realize drag is a whole culture beyond Drag Race. There are other girls f—ing killing it out here.

I know Silky and Vanjie are doing live shows with you. Are we getting a tour?
I’m doing more spot dates, but I don’t know if I’m doing a whole tour. I’m going to start recording my next album in September or October. I want to keep putting out content, and I’d like to have another album out by next year. My plan is to keep building and introducing people to a version of me that I’m proud of. I’d love to do a full-blown amphitheater tour next summer with two new albums’ worth of content.

Will that new album contain the Azealia Banks collaboration?
[Laughs] I don’t know! She reached out to me to collaborate, and I’m a very nice person, contrary to what people believe. I don’t actually like fighting with people! Nobody ever wants to forgive and forget, but I think that’s the best thing. Why keep negative energy you don’t have to? When she reached out, I said, “Of course, sure!” Somehow, it all turned to s—. I guess she changed her mind. So, I don’t think so. But I have a Brooke Candy collaboration coming out. That one’s pretty good and will go hard in the gay clubs.